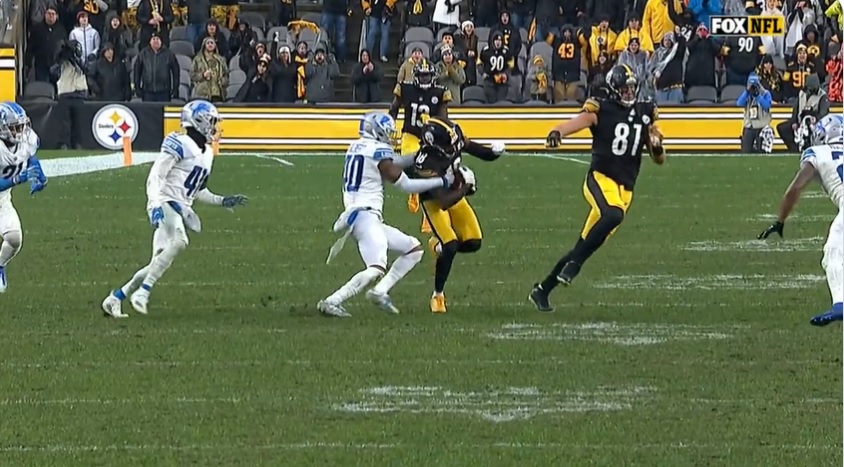 Diontae Johnson didn’t see the ball a lot Sunday. But his best catch ended with the worst finish. A 39 yard catch and run down the right side in overtime, one that should’ve put the Steelers on the edge of field goal range. Key word – should. Johnson fumbled the ball, recovered by Detroit, and Pittsburgh ultimately didn’t attempt a field goal on that drive or for the rest of the game.

In a post-game press conference, Johnson talked about the error.

Pittsburgh likely would’ve needed a couple more yards to get in a makeable range for Chris Boswell, who to his credit, has been nailing 50-yarders with regularity at Heinz Field, including one Sunday. But the Steelers never got that chance. Of all people to force the fumble, it was former Steelers’ corner Mark Gilbert, initially beaten on the play, but rallying to finish it. The Lions signed Gilbert off Pittsburgh’s practice squad earlier in the year.

Johnson knows the two overtime fumbles, one by him and one by rookie Pat Freiermuth, were costly.

“Obviously we should have won the game. Those two plays took the momentum for us. We got to come back to work this week and we’ll be fine.”

Overall, Johnson has played well in his third season despite an offense that looks disjoined more often than not and one focusing on running the football more often, not throwing it. Johnson has cleaned up his drop issues and though ball security hadn’t been a big problem this year, that fumble came at the absolute worst time. It was one of several reasons why the Steelers are awkwardly walking away from this one with a tie, not a win.