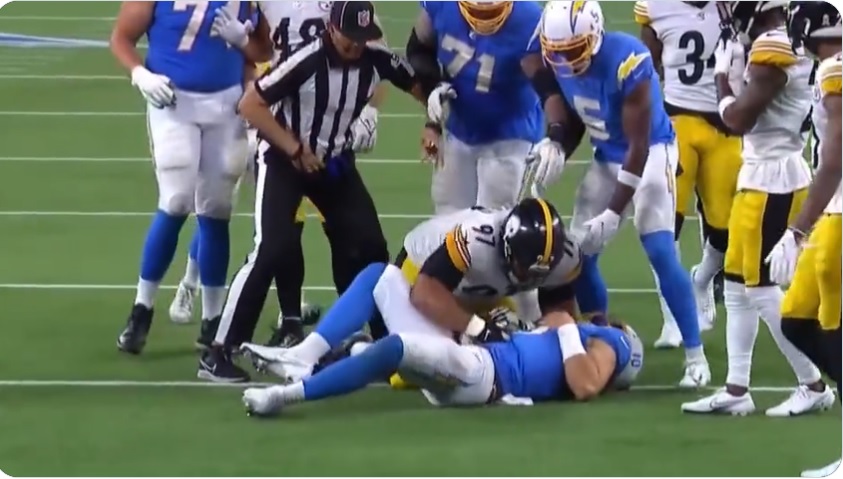 Despite being flagged for unnecessary roughness against Los Angeles Chargers QB Justin Herbert last Sunday, Pittsburgh Steelers’ DL Cam Heyward will not be fined for the incident in which in appeared Heyward to have punched Herbert.

#Steelers DL Cameron Heyward was not fined for unnecessary roughness during a run-in with #Chargers QB Justin Herbert last week. Heyward appeared to punch Herbert, though he denied that was his intent. Now, no fine.

After tackling Herbert following a long, 36 yard run, Heyward landed hard on Herbert at the end of the play following a small skirmish with another Chargers’ player. Heyward’s act looked like a punch, drawing a flag from the officials.

Heyward denied the allegation that he intentionally punched Herbert, saying he was out of breath after running downfield and lost his balance attempting to stand up.

“I was trying to get up,” he said after the game. “I couldn’t get up and I fell back on him. I know it looks terrible. There was nothing malicious behind it.”

Heyward said earlier this week he’s attempted to reach out to Herbert in order to apologize for what happened, telling reporters he did not want to be viewed as a dirty player. Heyward has among the best reputations in football, on and off the field.

The Chargers scored on the following play after the penalty. But officials are clearly on Heyward’s side, not believing the act was worth hurting Heyward’s wallet.

Heyward has only been fined twice in his career and not since 2015. In 2014, he was fined over $22,000 for yelling at an official. In 2015, the league fined him over $5700 for illegal eye black that honored his father, the late Craig “Ironhead” Heyward.” Heyward butted heads with the league over the decision but stopped wearing the eye black with his dad’s name later that year.