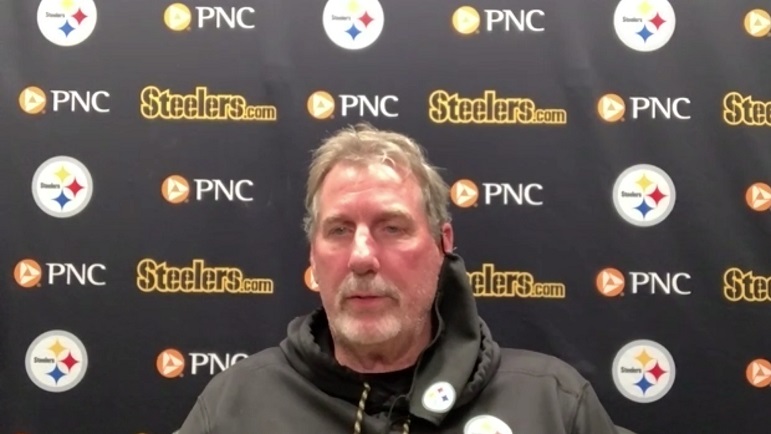 It’s beginning to sound and look like Pittsburgh Steelers outside linebacker T.J. Watt won’t play against the Los Angeles Chargers on Sunday night, as he’s currently dealing with an injured knee and hip.

Even if Watt does wind up playing on Sunday night, the Steelers will still likely need to fellow outside linebackers Taco Charlton and Derrek Tuszka to play a large number of snaps in that contest. On Thursday, Steelers defensive coordinator Keith Butler held his weekly press conference, and during it he was asked to evaluate the play of both Charlton and Tuszka to date. He was also asked if those two outside linebackers will be ready to handle increased roles on Sunday night against the Chargers.

“Whether they’re ready or not, they’re going to have to, you know,” Butler said. “So, we can’t wait on them. They’ve got to come out and they’ve got to know what we ask them to do. They’re getting better in terms of that. You know, they still make a mental mistake here and there and I’ve been taught as a player and a coach for as long as I’ve known, you know, mental mistakes and missed tackles get you beat. So, we’ve got to try to eliminate the missed tackles and the mental mistakes in getting these guys lined up.”

In addition to Butler commenting on Charlton and Tuszka on Thursday, he also talked some about starting outside linebacker Alex Highsmith as well while updating his thoughts on the two primary backups.

“Obviously, you know, actually I’m high on Alex Highsmith,” Butler said. “I think he has really played some good football for us and watching him run around on the field and getting after people and stuff like that, he has really come along. And so, we need for one of them, or both of them, to kind of fill in for us if we can. We’re not asking them to be T.J. [Watt], or nobody like that. But I think they could help us.

“Taco’s, a big, long, tall guy and he’s a good pass rusher. Uses leverage pretty good. And then Derek tries to know what to do. You know, a lot of times he makes mistakes, and a lot of times guys learn from their mistakes, and they get better from that. That’s how Alex Highsmith was when he was a rookie. He made a mistake one time, and you correct him and that’s the only time he makes it. He doesn’t make it again. And so those guys are going to have to be like that. If they make a mistake, fine, okay. We correct a mistake. After we correct it, we don’t see it again. And so, for those guys, I think that’s what we’ve got to get out of them, especially these next couple of games, depending on if 90 doesn’t play. If he doesn’t play. We don’t know if he’s gonna play yet or not. We’ll see.”

While Highsmith only has one and a half sacks so far this season playing opposite Watt, Butler doesn’t sound too concerned about the second year outside linebacker lagging in that particular statistical category, even with opposing offenses obviously not defending him as vigorously as they do his All-Pro and Pro Bowl counterpart.

“Yeah, well, you know, I’m sure people that when they play us, they’re aware of that,” Butler said. “You know, they’re going to sit there and look at the stats, too. So, T.J. might be getting a little bit more attention. Alex, I would, to me, I would give them both attention if I was trying to play us. I ain’t going to tell you how to beat us, or anything like that, but I really like the way Alex has been playing. I think T.J., you know T.J. speaks for himself. Cam [Heyward] does a good job for us and the rest of our guys have got to come along. Our young guys have got to come along. You know, we’ve lost [Tyson] Alualu, that hurts us a little bit, so we’ve got to come along at that position also.”

The Steelers’ defense enters Sunday’s game against the Chargers with 26 total quarterback sacks, and 12.5 of them have been registered by Watt. The other three outside linebackers currently on the 53-man roster, Highsmith, Charlton, and Tuszka, have combined to register just 1.5 sacks, as Charlton and Tuszka have yet to register any. The Chargers offense has surrendered just 17 total sacks this season, so it will be interesting to see if a group of Watt-less outside linebackers can get a few on Sunday night. If the Steelers front seven can’t find a way to get pressure on Chargers quarterback Justin Herbert on Sunday night, it could make for a long game for that unit. Ahead of the Sunday night game, however, Butler made it clear that he is counting on Charlton and Tuszka to play well against the Chargers with or without Watt in uniform.

“They’ve gotten a lot more reps this past week, so hopefully we’ll be okay with those guys, and they understand what we’re trying to get done,” Butler said of the Steelers two backup outside linebackers. “They’ve got to step up for us.”