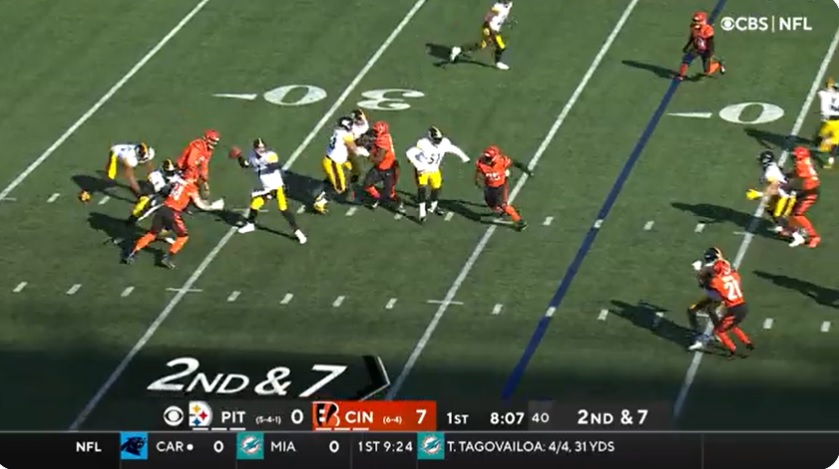 After getting through five games without throwing an interception, Ben Roethlisberger’s streak came to an end with a whimper Sunday inside Paul Brown Stadium as the veteran signal caller threw two crucial interceptions that spotted the Bengals 10 points, which ultimately ended up giving Cincinnati enough of a runway to drop 41 points on the Steelers in a 41-10 defeat.

Roethlisberger’s first pick came on the Steelers’ first drive of the game with the Steelers facing a second and seven from the 37 yard line. Eyeing a throw to the right side for second-year receiver Chase Claypool, Roethlisberger misfired which led to an interception by Cincinnati’s Eli Apple, who returned the interception down to the Steelers’ 5 yard line, eventually setting up a 31-yard field goal by Evan McPherson.

After the game, Roethlisberger addressed the first interception to Apple, stating that Chase didn’t run the wrong route, but that he had to get rid of the football a little quicker than he would have liked to due to pressure.

“…I had to step up in the pocket. I had to let go of it a little sooner than I wanted to; it was a double move,” Roethlisberger said to reporters Sunday following the loss to the Bengals, according to video via the Steelers’ official YouTube page. “I let go of it like he was going to go outside them and he ended up coming in, going inside him. It wasn’t the wrong route. It’s just,I let go of the ball probably a little too soon, and unfortunately worked out the way it did.”

If Roethlisberger holds onto that football a tick longer and gives Claypool a chance downfield, that could be a big splash play right away for the Steelers, as it appeared as though Claypool read the coverage correctly and broke inside where there was no safety help.

The correct take. Chase saw something developing, Ben never really looked MOF for safeties. Need to see the All-22 of this fully develop, but feels like Chase read this correctly, Ben didn't. https://t.co/EbNdtrUf17

Following an interception by Minkah Fitzpatrick deep in Steelers’ territory, the Steelers were eyeing some positive momentum heading into the half.

Instead, disaster struck again as Roethlisberger was late and behind on an out route to James Washington, resulting in a pick-six for former Steelers’ cornerback Mike Hilton from 24 yards out, giving the Bengals a 31-3 lead at the half.

After the game, Roethlisberger stated that his arm was hit on the play, resulting in the bad throw and the pick-six.

“…Hate it. Went to throw it, got my arm hit and Mike made a good play,” Roethlisberger said.

It does appear as though Roethlisberger’s arm gets hit on the follow through, which likely resulted in the duck that came out of his hands. Some were questioning the need to throw it there, but the Steelers had the football at their own 21 yard line with all three timeouts and 37 seconds left. That’s plenty of time to get the football down the field and into field goal range for Chris Boswell.

Would that field goal have changed things in hindsight? Probably not. But it’s hard to fault the Steelers or the coaching staff for deciding to be a bit aggressive in that situation.