Pittsburgh Steelers quarterback Mason Rudolph got his first playing time of the season due to fellow quarterback Ben Roethlisberger missing the game on the COVID list. While this was less than ideal and wish Roethlisberger health and quick recovery, I wanted to take this opportunity to look at some data on Rudolph’s performance and look at comparisons and takeaways for the Pittsburgh quarterbacks.

First, let’s look at the following data points from Next Gen Stats for week ten league-wide, when Rudolph stepped in for Roethlisberger: 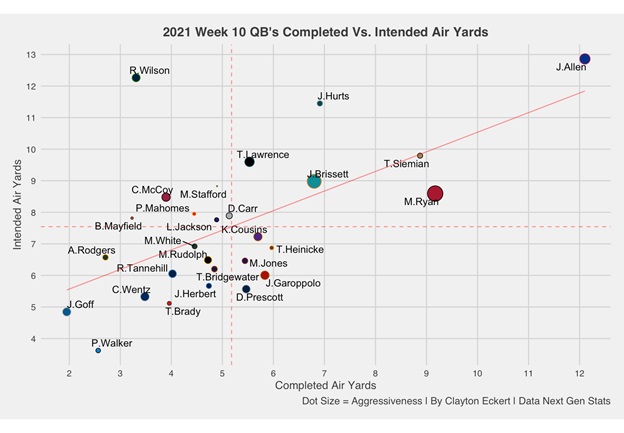 Here is a table view of the comparisons: 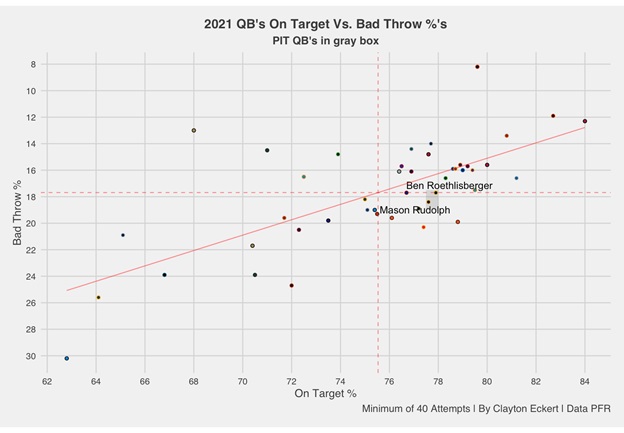 The data points where I saw the most differences were completion percentage and adjusted net yards per pass attempt (ANY/A). Roethlisberger has a 6.01 ANY/A number for the season while Rudolph posted a 4.34 number for week ten! To review, here is ANY/A defined: Passing Yards – Sack Yards + (20 * Passing TD) – (45 * Interceptions)) / (Passes Attempted + Times Sacked).

Lastly, I also wanted to look at expected points added (EPA) for the quarterbacks by week: 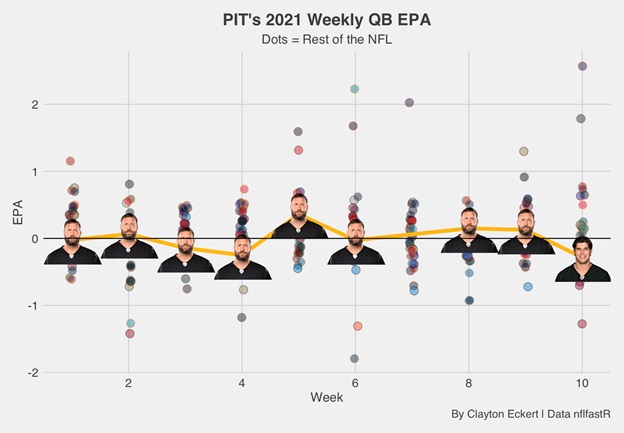 This graph gives us context to how the Steelers quarterbacks have fared for the team, and how they have stacked up with the league. Comparing Rudolph’s performance with Roethlisberger, the former posted the lowest EPA number in the week ten tie against the Lions at -0.28 while the latter’s lowest mark was -0.25 in week four against the Packers. Roethlisberger’s week five game against the Broncos was his highest mark at 0.35, one of four positive EPA performances on the season so far. I also found it interesting that neither Steelers quarterback has strayed too far from the line of 0 EPA, considering there have been less than ideal performances to say the least.

It will be very interesting to watch the injury report for the remainder of the week and see which quarterback ends up facing off with the Los Angeles Chargers on Sunday night. What are your thoughts on the Steelers quarterbacks in 2021 so far? Thanks for reading and let me know your thoughts in the comments!