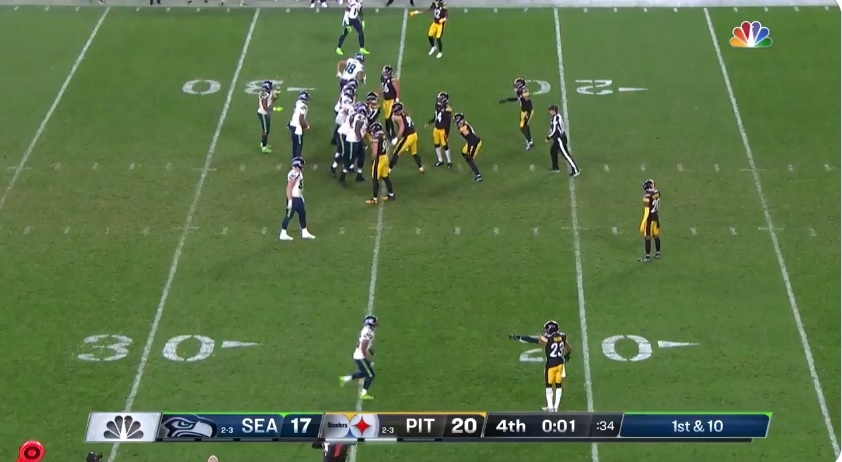 In typical Pittsburgh Steelers’ fashion, they couldn’t cruise to an easy victory against a team on the road with their backup quarterback and running back. Blowing a 14-0 lead, the Seahawks repeatedly climbed back into Sunday night’s game, tying the game at 14. Pittsburgh re-took the lead on a 52-yard Chris Boswell field goal but Seattle quickly marched downfield in the game’s waning seconds to try and kick a field goal of their own.

With 18 seconds left and no timeouts, Geno Smith hit D.K. Metcalf along the left sideline (unacceptable enough by the Steelers’ defense) Metcalf attempted to get a couple extra yards before going out of bounds but CB James Pierre punched the ball out. Seahawks’ WR Freddie Swain jumped on the ball but with a running clock, Seattle scrambled to get to the line of scrimmage. Smith appeared to spike the ball with one second left but the refs stopped play to review Metcalf’s catch, an element of play that didn’t seem to be in question.

After a long review, the refs ruled it was a catch, allowing the Seahawks to catch their breath and spike the ball with three seconds remaining. Jason Myers hit the game-tying field goal to send the game to overtime.

What exactly the refs were trying to accomplish there is unclear. And Mike Tomlin didn’t receive any suitable answers, tearing into the officiating after in his post-game presser.

“I hated it,” Tomlin said of the sequence. “I can’t believe that game was stopped to confirm catch/no catch in that moment.”

After stating that was “all I am going to say,” he added an “it was an embarrassment,” the cherry on top of the blunt critique.

By head coach standards, those are fighting words. Which means they’re going to be fining words. Something Tomlin is evidently okay with, according to this tweet from Mike Asti, who heard Tomlin say this moments before his presser.

As I walked to the postgame pressers, I heard Tomlin yelling, “I’M TELLING THE TRUTH. I’M WRITING A CHECK TO THE LEAGUE OFFICE TONIGHT.”

While the refs had no grounds to review the catch/no catch, it ultimately probably didn’t impact the game greatly. Smith still spiked the ball with time on the clock and Seattle would’ve been able to line up for the field goal even without the refs intervening. The only element to consider was whether or not WR Tyler Lockett was lined up on the line of scrimmage (bottom of the screen, watch Joe Haden’s reaction). If the refs threw a flag, it would’ve lead to a ten-second runoff and the game ending. But the refs never flagged it in the first place.

All’s well that ends well and Pittsburgh got the victory about 15 minutes later. But it’s never a good look for the league to make these kinds of mistakes in primetime football. No fans want to watch refs huddle in an end-game, do-or-die situation. Tomlin’s criticism is well-placed. Tomlin’s wallet, though, won’t be too happy by the end of the week.