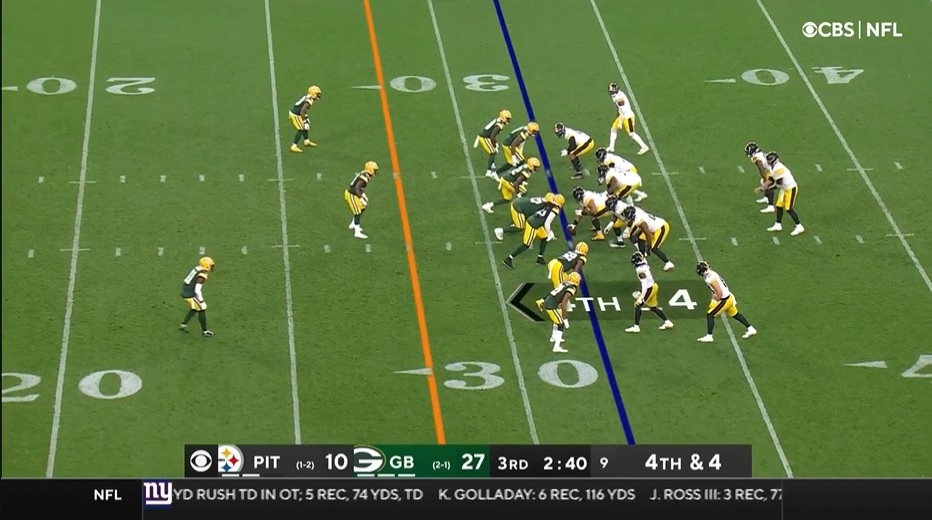 The next fourth down the Pittsburgh Steelers convert will be their first. On the season, they’re an ugly 0-5 with two more failures in Sunday’s loss to the Green Bay Packers. Mike Tomlin is less worried about the call itself and more about the execution of it. That’s how he framed it when asked about the team’s fourth down plan during his Tuesday press conference.

“There were other eligibles beyond the line of gain,” Tomlin said.  “And so yes, I had a great deal of confidence in the plays that were called. Obviously we’d like the outcome to be different.”

We covered the fourth down mishaps Monday morning. The first came on (another) swing pass to Najee Harris. It didn’t appear to be the design of the play but perhaps a product of Ben Roethlisberger feeling pressure that wasn’t there, the Packers showing blitz but dropping eight into coverage.

Tomlin, as he often does, gave credit to the Packers for a good gameplan.

“I’d be remiss if I didn’t compliment Green Bay and Joe Barry and in particular their coordinator. They did a few things differently in those circumstances and created issues for us. So kudos to them.”

The following fourth down failed conversion is a great example of that. The Steelers ran a mesh concept, a common man beater. But the Packers played zone and with pressure on the play, Roethlisberger had to throw the ball short of the sticks to JuJu Smith-Schuster. Earlier in the game on a similar down, distance, and line of scrimmage (3rd and 4 from the Packers’ 32) the Steelers ran mesh and the Packers responded with man coverage. Smith-Schuster was open underneath though Roethlisberger threw deep and incomplete to Diontae Johnson. Pittsburgh anticipated getting a man-call again but the Packers changed things up, a great tendency breaker to win schematically.

Why the Steelers ran mesh on failed 4th and 5 pass to JuJu. Expected man coverage, got zone.

Had run it earlier in the game on 3rd and 4 in plus territory. Packers in man, JuJu open on the mesh. GB switched to zone on 4th down. Good tendency breaker to beat Steelers. #Steelers pic.twitter.com/mEWSmFSvDX

Overall, Tomlin said he had no issues with the call. Just the outcome.

“Yes, I felt good about them. No, I didn’t feel good about the result of them. And so we’ll roll the ball out and work again for preparation and those moments this week.”

The best way to avoid fourth down failures is to avoid needing to go for it on fourth down in the first place. But the Steelers figure to play from behind quite a bit this season and so they’re going to need to step up in these moments.