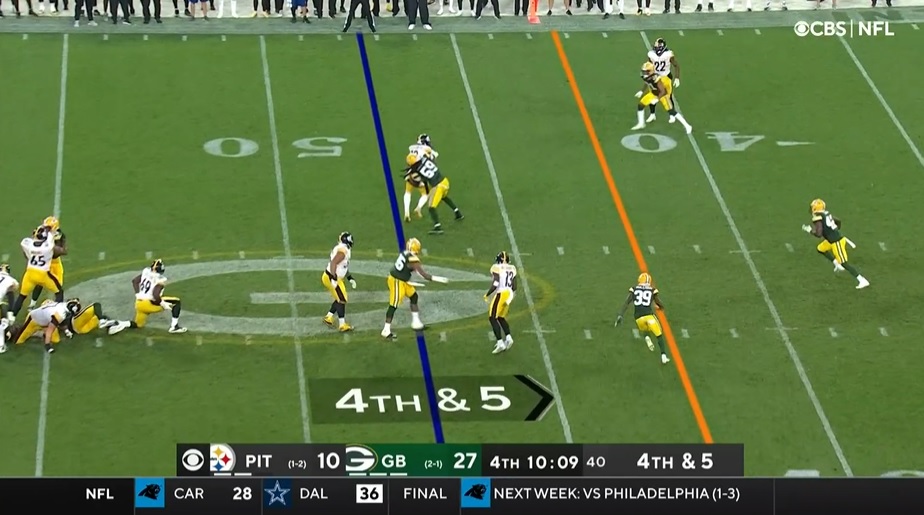 The Pittsburgh Steelers’ offense is lacking a lot of things. In fact, the list of things they do have is much shorter than the things they’re missing. But on that long list of issues is a lack of a go-to fourth down play. Over the last two weeks, Pittsburgh’s had three ugly fourth down playcalls with even uglier outcomes.

We’ll take them chronologically, beginning with the 4th and 10 “picket fence” failure last week against the Cincinnati Bengals. I won’t dwell on it long because we talked about it quite a bit this past week. The actual playcall here is still debatable. Was it a designed swing pass for Harris with (supposed) blockers out in front, as Roethlisberger said? Or did Roethlisberger anticipate the Bengals blitzing, as they did earlier in the game, threw the ball hot, and got fooled when the Bengals dropped out? My instinct says it’s the latter.

What made this call all the more interesting is how little the team said about it later in the week. And when they did speak, they offered contradictory statements. Roethlisberger saying they had blockers, Canada saying they had “guys in the end zone.”

4th and 10 is a tough spot. There is no high percentage call on the call sheet. But this is just an ugly outcome.

Fast forwarding to yesterday. 4th and 4 down 17. Need to convert this one. Like the Bengals, the Packers show pressure and again, they drop out. It’s only a three man rush. But Roethlisberger fires it into the flat to Harris, just like Week 3, and Harris is swarmed for a loss.

Conceptually, the Steelers are trying to flood the right side with three eligibles. It looks like a spot concept, a flat/curl/corner combination (Eric Ebron trips over JuJu Smith-Schuster’s feet) which isn’t a bad idea, I suppose, but it’s not effective. Can’t throw short with eight dropping. They’re going to rally and tackle the catch.

Keep in mind this was the playcall/outcome coming out of a timeout, too. Makes it worse.

Steelers go for it again on 4th and 5 in the fourth quarter. Running a mesh concept between JuJu Smith-Schuster and James Washington. Washington setting the mesh and Smith-Schuster running underneath it. Mesh works best as a man-coverage beater. Attempting to “pick” the defenders running into each other on the mesh.

But the Packers are running zone coverage here and pass off the routes with ease. Roethlisberger’s throw to Smith-Schuster, four yards shy of the sticks, has no chance, and Smith-Schuster is tackled well short of the marker.

There is pressure on the play, Kevin Dotson loses his footing (this was the play he suffered his hip flexor injury) which forced the ball out. But conceptually, a bad call against zone defense.

Fourth down situations aren’t easy. Defenses can play the sticks, can dial up blitzes, they’re in control. They know where the offense *has* to go. But the Steelers don’t have anything they can pull out in these key moments. It’s fair to say the first two plays are more on Roethlisberger than the playcall itself – it really feels like Roethlisberger is feeling pressure that isn’t there (probably due to all the hits he’s taken and a general lack of trust in this offensive line) but Canada’s 4th and 5 call against the Packers was just as poor. I’m guessing he assumed the Packers would be in man coverage here. They weren’t.

These are tough spots to be in for an offense. Especially an offense that looks among the worst in football. There are no magical calls to dial up. But that’s three throws and not one of them went to the sticks. But in scheme and execution, the Steelers aren’t winning these moments.

They aren’t winning much of anything right now.