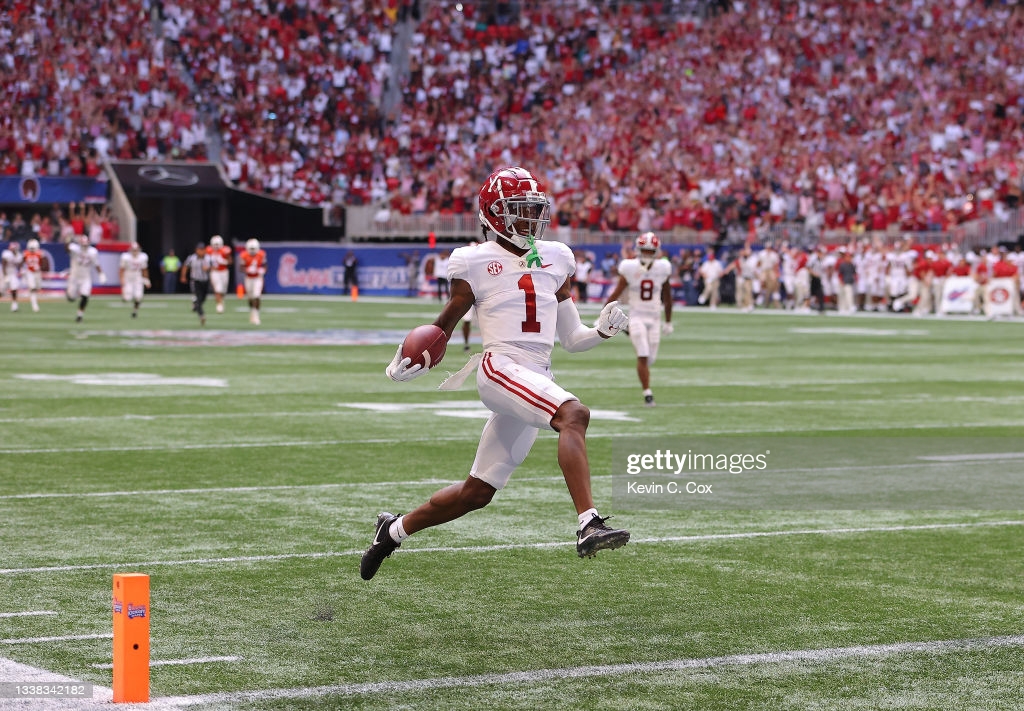 Dave Bryan and Alex Kozora have mentioned in the past on The Terrible Podcast that the Pittsburgh Steelers currently lack that natural deep threat in the offense that can reliably take the top off of the defense. Sure, Chase Claypool can win his fair share of contested catches downfield and Diontae Johnson can challenge defenses vertically, but Claypool doesn’t naturally stack corners on the boundary like a speed demon would, and Johnson profiles more as a route running savant that works all quadrants of the field rather than a true filed stretcher would.

The fact of the matter is Pittsburgh lacks that Mike Wallace/Martavis Bryant profile of receiver that puts fear in defensive backs, and frankly it shows. While some blame can fall on Ben Roethlisberger’s regression as a deep ball passer over the years, the team just doesn’t challenge opposing defenses enough vertically as their current receiver core doesn’t create ample separation down the field. This allows opposing defenses to challenge Ben to beat them deep and sit on the short dink and dunk passing game Pittsburgh has become known for the last two seasons. Daniel Jeremiah and Bucky Brooks on the Move the Sticks Podcast recently shared the same sentiment, acknowledging the lack of deep speed on Pittsburgh’s current roster.

Thus, I wanted to dive into the college tape and present several names Pittsburgh could consider adding via the 2022 NFL Draft to bring this vertical element back to their offense to open up the passing game.

John Metchie III may have been the headline name for the Crimson Tide receiver core heading into the 2021 season, but that honor likely has shifted over to Jameson Williams. Williams transferred from Ohio State to Alabama this season, looking for a change of scenery and a chance to showcase his talent on the biggest stage. Thus far, it appears his decision was a good one, having accumulated nearly 300 receiving yards and three TDs while averaging 24.9 YPR. Williams also has made quite the impact in the return game for the Tide, housing two kickoff returns in the same game against Southern Miss. The 6’2, 189lb speedster has the juice to take the top off of the defense at any time.

When watching Doubs, you notice right away that he is a natural deep threat. Doubs does a good job of stretching the seam of defenses, making opponents pay for failing to contain him in coverage. He has a real knack of stacking defenders at the top of his route and challenging the defense vertically, having the long strides and efficient linear movement as a runner to eat ground quickly. You can say that Doubs played against inferior competition, which may be true in the Mountain West Conference. However, the dominance he has at pulling away from coverage deep down the field with such ease suggests he should be able to replicate this ability to separate to some level in the pros.

While significantly bigger and larger than the other names on this list Treylon Burks (6’3, 225lb) is the height/weight/speed specimen that has the explosiveness and long strides to get on top of opposing defensive backs in a hurry if you are not careful. Burks is currently averaging nearly 20 YPR and has two receptions over 80 yards this season including an 85-yard bomb against Texas A&M last week. Burks has the ability to win deep down the field, stacking the outside corner along the sideline and got a step behind the coverage to bring in the deep ball for game changing plays. Having a similar build to D.K. Metcalf and A.J. Brown, Burks is a name defenses have to be aware of at all times.

Several members of Steelers Depot have been on Zay Flowers for a while now. While Flowers profiles more as an all-around receiver that can work all areas of the field, he has his own set of wheels both with the ball in his hands and when tracking the ball in the air. He has the change of direction ability to make defenders look silly in space, and his nuances as a route runner by eating cushion and making crisp cuts out of his breaks on vertical route concepts lead to him beating defenses deep if they don’t provide help over top. Flowers’ run-after-catch ability tops off his skillset as a threat to beat you deep and pull away from anyone in pursuit.

While a lengthy injury history has capped his potential impact thus far, Reggie Roberson Jr. is a walking highlight reel for the Mustang offense. A true threat to score any time the ball is in his hands, Roberson is much like Flowers where his timed speed and play speed differ, as he may not run the fastest 40, but you see him regularly pull away from corners with ease. He eats ground quickly off the snap, exploding forward off of the line with the intent to challenge opposing defenses deep down the field. He is a perfect fit for the air raid offense SMU has become known for, and should his medical check out, his impact as a deep threat makes him a tantalizing prospect.

What are your thoughts on the current state of the Pittsburgh Steelers’ WR core? Do you agree that they need to add a true deep threat to open up the offense and force opposing defenses to play them honest? What are your thoughts of the names listed above as potential targets to fill this role? Please leave your thoughts in the comments section below and thanks again for reading!