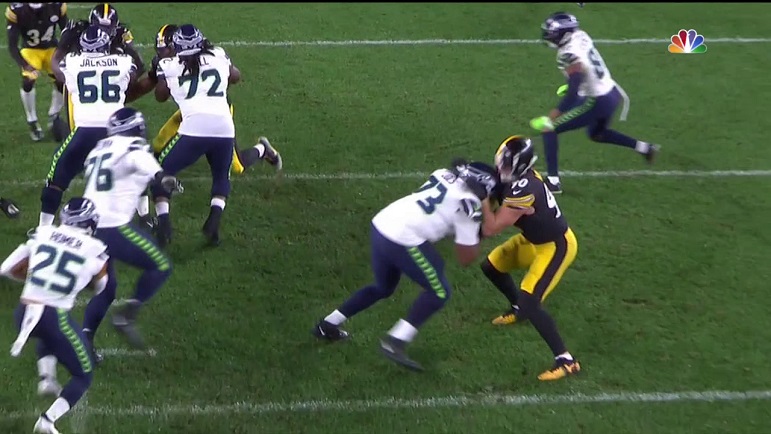 The Pittsburgh Steelers defense certainty didn’t have a great showing overall against the run in their Sunday night home win against the Seattle Seahawks, as the unit allowed 144 net yards on the ground on 27 total attempts, of which one was a quarterback kneel-down. Most of those rushing yards came in the second half with one of them being a guard-tackle wrap run by running back Travis Homer for 26 yards from left to right on a third-and-seven late in the third quarter.

After Sunday’s game, Steelers outside linebacker T.J. Watt, who was blown up quite substantially on that running play that went for 26 yards, was asked to comment on the big gainer, the longest one of the contest on the ground.

“I think, like I said, it was just us trying to understand as a defense, as players, what we’re expecting to get,” Watt said. “And it was commitment to the run [by the Seahawks offense]. They were running the ball, they were hitting the front side and when it wasn’t front side, he was wrapping back really effectively. And in the shotgun, I think they hit us on a third-and-seven run and we were in a pass [rush mode]. Our ears were pinned back. I think I got kicked out pretty good. But it was just those situations where you have your ears pinned back and you’ve got to understand that they can run the ball when we’re in that package with three outside backers on the field.”

Quite honestly, the pulling Seahawks guard on that play, Jamarco Jones, probably should have been flagged for intentionally lowering his helmet begore blocking Watt. He wasn’t, however, and the Seahawks had a nice explosive run after the dust cleared.

Steelers outside linebacker Alex Highsmith was also asked about that particular run by Homer during his Monday press conference.

“Yeah, I remember that play,” Highsmith said. “I think, you know, a lot of us were in a pass rush mindset for that play. You know, it being third and long and so I think that one definitely caught us off guard.”

Luckily for the Steelers, that particular drive resulted in the Seahawks needing to settle for a field goal. Perhaps that long run by Homer was just the wakeup call that the Steelers needed when it came to stopping the run as the unit allowed just 16 yards rushing on the Seahawks next and final seven rushes in the game. Three of those runs resulted in lost yards. Watt, by the way, was in on the tackle on four of those last seven runs.