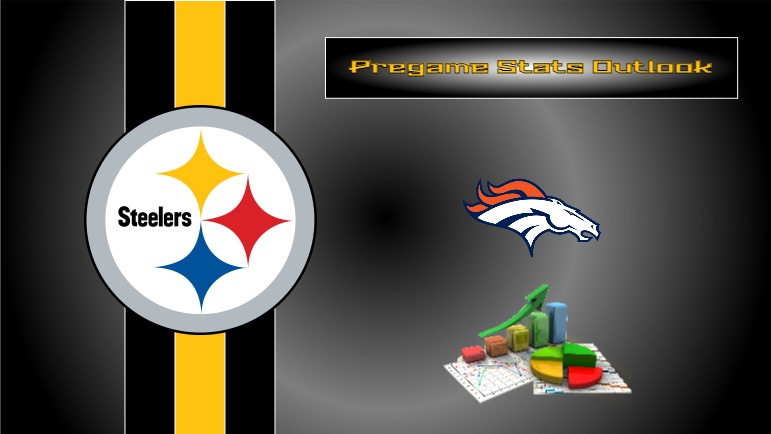 Today I wanted to look at some data for the season, discuss some takeaways for the Pittsburgh Steelers Week 5 matchup against the Denver Broncos, and pose some questions for you the readers.

First, I wanted to look at quarterbacks for the 2021 season so far using the following data points: 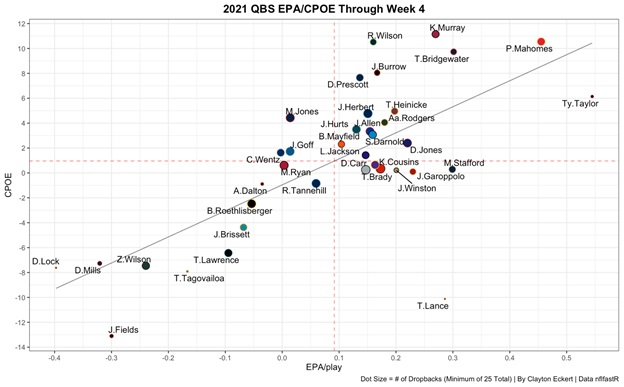 Right away we can see Broncos quarterback Teddy Bridgewater is having a successful 2021 season so far, and when Denver backup Drew Lock has played there has been a huge drop off in quality of play. Bridgewater is currently recovering from a concussion injury and is questionable to play against the Steelers. He did practice fully on Friday and reports seem to indicate that he will play. Bridgewater ranks third in EPA and fourth in CPOE in 2021 so far, and it will be interesting to see how the Steelers defense does against the Broncos offense on Sunday.

Steelers quarterback Ben Roethlisberger is below the mean in both data points, highlighting the offensive struggles for Pittsburgh so far in 2021. Roethlisberger has taken hard hits this season and really hope the offensive line can keep him upright more, which will hopefully provide a better performance in the pass game against Denver’s pass rush.

How do you think the quarterbacks will fare in the game on Sunday? What are some of your favorite takeaways league-wide?

Now let’s look at the Broncos and Steelers running backs using the following data points from Next Gen Stats: 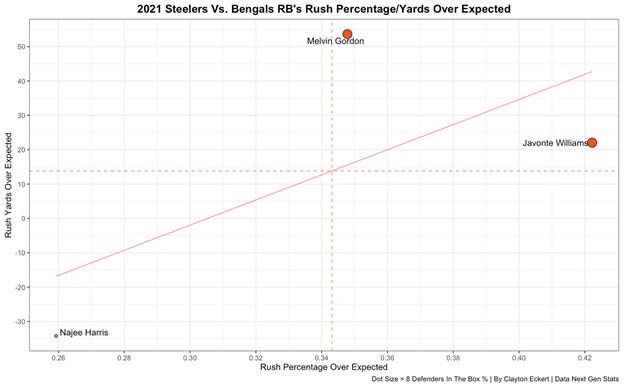 Right away we can see the Broncos running backs have done well with the data points, which is especially impressive with the greater percentage of stacked boxes they have faced compared to Steelers running back Najee Harris. This also highlights the hope to see more rushes from Harris in this game, especially if the Steelers offensive line can continue to improve in their run blocking as we saw last game against the Packers. Melvin Gordon is also on the Broncos injury report with a leg injury, so if he is unable to play we could see a prominent battle of two rookie running backs that were picked high in the 2021 draft (Najee Harris: Pick 24, Javonte Williams: Pick 35). If this is the case, it will be fun to see the two face off and see who has the stronger performance.

Which team do you think will have a better running game on Sunday?

Next let’s look at a similar graph for the top wide receivers for both teams using these data points: 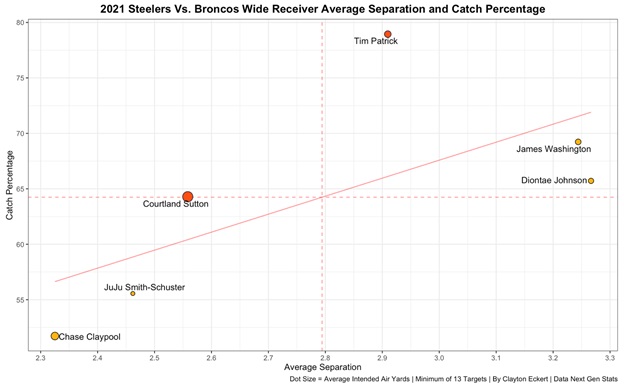 Broncos wide receiver Courtland Sutton has the longest average intended air yards for all players on the graph. He did show up on the Broncos injury report with an ankle injury and was a limited participant on Friday. Tim Patrick is the other Denver wide receiver to make the graph, and he has a great catch percentage on his 19 targets so far in 2021. The Broncos have suffered multiple injuries at the wide receiver position this season, so tight end Noah Fant will likely see plenty of targets that the Steelers defense will need to account for, especially if Courtland Sutton is unable to play.

The Steelers have four wide receivers on the graph, which highlights missed games at the position so far in 2021. Steelers wide receivers James Washington and Diontae Johnson lead the team in catch percentage and separation while wide receivers JuJu Smith-Schuster and Chase Claypool have struggled to find success with Roethlisberger overall and with separation. James Washington was ruled out for the game on the Friday injury report, but the good news is Johnson, Smith-Schuster, and Claypool will all likely play this Sunday.

Defensive pressures are another element of the game I am excited to see unfold, especially with Broncos linebacker Von Miller and Steelers linebacker T.J. Watt. The Broncos have 45 pressures as a team for the season with Miller having a team lead of 12, and the Steelers also have 45 pressures as a team with Watt having the team lead at 13 according to Pro Football Reference. Hopefully T.J. Watt can have a better performance this week compared to the Packers game where he just came back from injury and did not have as strong of a performance as we are accustomed to.