We’re going to start this article at the 5:16 mark of the third quarter where NFL on Fox granted us with a booty shot of Big Ben Roethlisberger. Give that cameraman/camerawoman a raise. 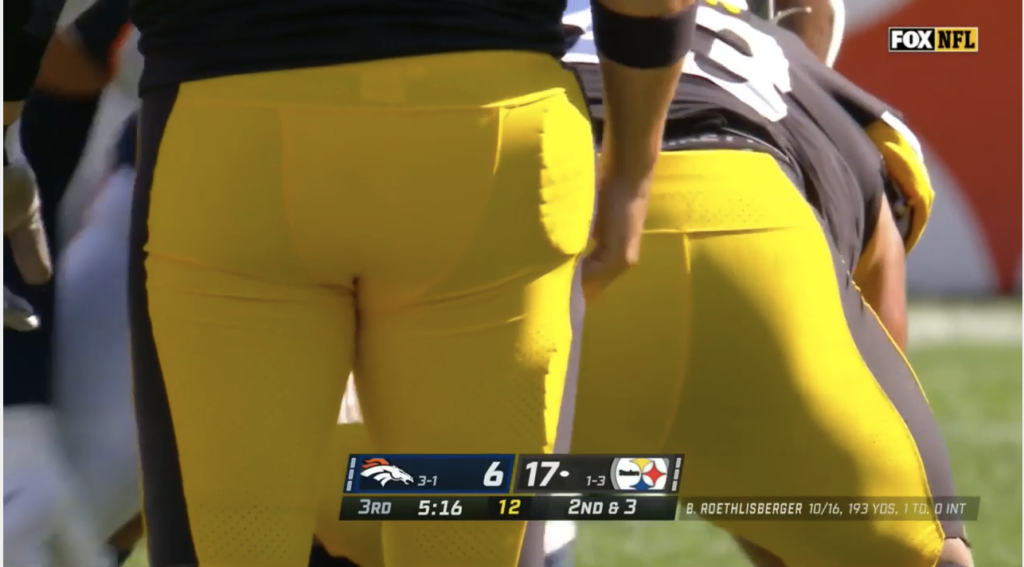 With the Steelers being up 11 behind a largely dominant defense paired with an offense that finally seemed to be getting their legs under them, the feeling was great.

Lining up just inside the 35-yard line you could feel just one more score would safely put this game away for good.

Matt Canada and the Steelers’ offense could smell blood in the water and tried to put the game away right then and there with a Yankee concept. 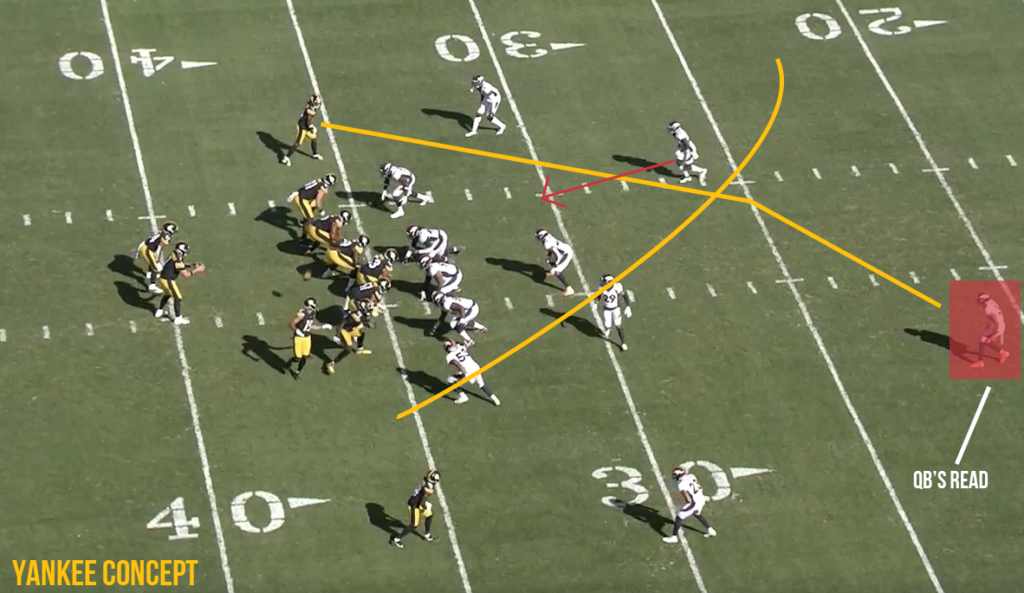 In this specific example, the Steelers are in 11 personnel (1 RB + 1 TE) with Cody White motioning across the formation in the slot. Oftentimes with this concept, just as seen here with Ray-Ray McCloud and White, receivers will be aligned in condensed or tight splits. The reason for this is it helps them gain inside leverage on their defender to work across the field.

Yankee also is usually run out of a heavy personnel grouping and formation causing the defense to load up the box to try to defend the run.  This means a single-high coverage will usually be behind it. While 11 personnel isn’t super heavy, the condensed splits of the formation help draw the Broncos’ strong safety into the box leaving them in cover 1.

The read for the quarterback against a 1-high scheme is simply watching the free safety and target whoever the safety doesn’t rotate to.

It’s a route concept the Steelers have had a ton of success with in the past, hitting chunk plays for touchdowns.

This time, it works just as it was supposed to. Both receivers get their inside leverage. The free safety stays over McCloud’s deep post, leaving Cody White wide open over the top.

Except Roethlisberger grossly underthrows White. If the throw lands around the 10-yard line, this is likely White’s first NFL touchdown.

That is if he was to catch the ball. As the drop on the play was as ugly as the throw.

It’s rare that you have chances to redo things in life, especially on the football field.

While it’s not out of the same concept, three plays later, Roethlisberger got the opportunity to right his wrong on the throw to White.

This time, he’s throwing to McCloud on an almost identical route, although it was more of a three verts concept rather than Yankee.

McCloud has a beautiful rocker step for his secondary release against the squat defender to get open vertically.

This time, however, with the interior pressure, Roethlisberger puts too much on the ball and overthrows McCloud.

There was an audible groan let out by all of Steelers Nation knowing how close the Steelers were to closing out this game. Now have to settle for a 51-yard field goal attempt to stay up by only 2 scores.

Chris Boswell drills it to go up by 14. That is until Mike Tomlin points out a penalty flag to the viewers at home.

*another audible groan is let out by Steelers Nation*

“Personal foul. Leverage. Defense. Number 93. That’s a 15-yard penalty and a first down.”

I’ve never heard a more beautiful string of words from the game’s head referee, Brad Rogers, in my life.

Now, Ben Roethlisberger gets a third chance of putting this game on ice, and this time he won’t disappoint.

On 3rd & 10, Roethlisberger doesn’t like what he sees from the Denver defense and calls a timeout. 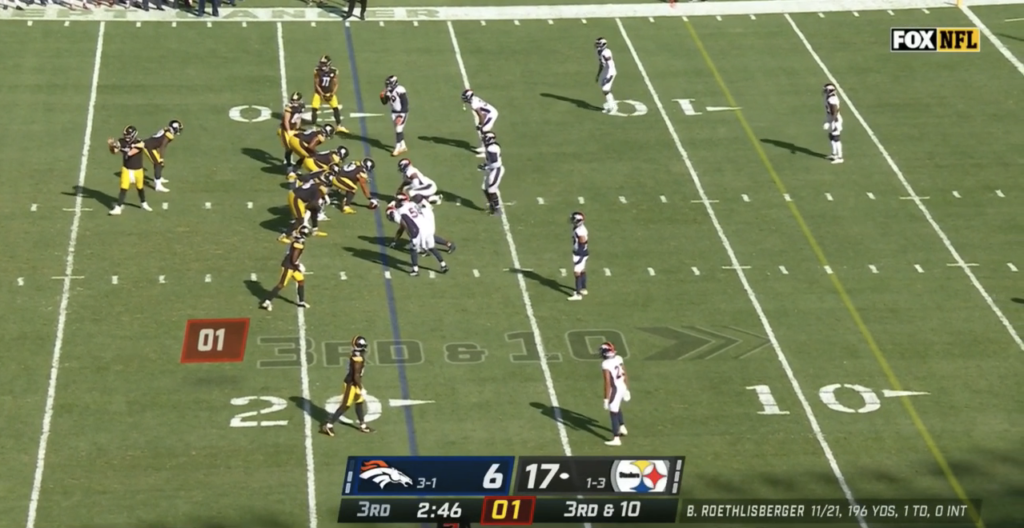 We’ve seen this before, and we often refer to it as a “waste of a timeout” from a fan’s perspective. This time, it was well worth it.

It’s now time for our turning point of the game.

While I don’t think the play was truly “set up”, like plays we’ve seen in the past, there were things seen throughout the game that made it a good play call.

The play below is very similar to the eventual Claypool touchdown we’ll be showing in a minute.

The defense is in 2-man and you can see just how wide open the deep middle of the field is. McCloud gets a great release, but with his route being a crosser, it makes him bend back into the defender.

If this is able to be a skinny post it’s a home run ball all day. Unlike the touchdown play, you don’t have an out and up further distracting the one safety further opening field.

So let’s combine that play with the fact Claypool has been able to split the 2-high schemes multiple times today, without being targeted.

TIme out has been called. What are we doing?

Let’s run that first play, except this time, let’s flip flop McCloud and Claypool and run the skinny post to attack that deep middle in 2-high.

This is what you get.

Seeing the play develop as an offensive coordinator had to be an elation. At the snap, the Broncos look to be in 2-man again, but the defenders all sink and sit around the sticks for a true cover 2 look.

This helps Claypool not have anyone walling off this throw underneath and although that deep-middle hole for the safeties is much tighter than the other clips, Roethlisberger is able to freeze that safety on the left side of the field just enough to squeeze this ball in there to Claypool. Notice the subtle nuance of the route as well from Claypool pressing outside right before his break to the post, also known as a “rocker step.” This further leverages the safety, on his side, and creates the space he needs to make the catch.

Lastly, kudos to Claypool for making this tough contested catch in the end zone, knowing you’re about to take a big hit. That’s a big-time play that we’ve been expecting to see from him.

Chase Claypool said his late TD was on a new play that Matt Canada put in pic.twitter.com/8fYM5rTi0R

Claypool even alludes to the “moved a couple people around, put them in the right spots” in his post-game press conference, which leads me to believe they did flip-flop Claypool and McCloud on this play.

It’s been rare that we’ve been able to see scheme and execution work hand in hand for this Steelers offense, with a lot of near misses. Sunday, it all came together for the offense and they were able to put that final nail in the coffin.