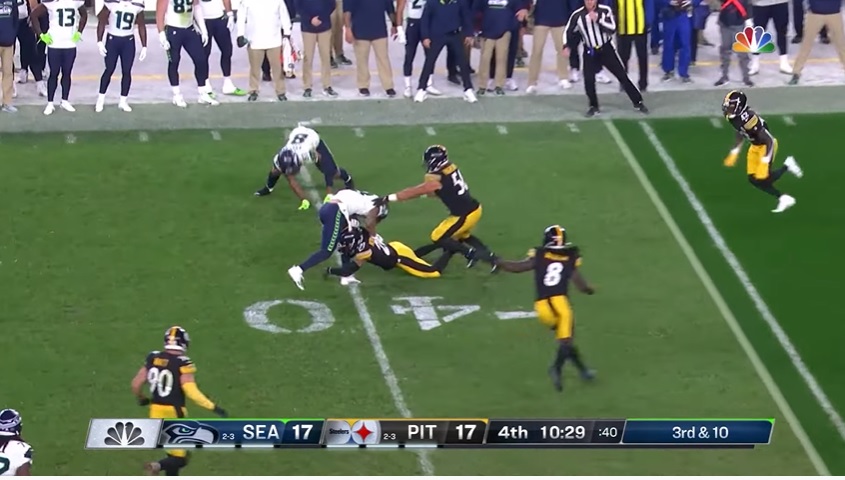 – Pittsburgh did its best to nearly blow it which would’ve made for an even weirder stat but since 1940, the Steelers are now 136-3-1 when leading by 14+ at halftime. Their last loss with that kind of lead came in 2018, the Keenan Allen on Jon Bostic nightmare. Since the merger, Pittsburgh’s lost only one other time when leading by 14+ at the break.

– Seattle had 18 yards rushing in the first half. They had 126 in the second half.

– Najee Harris is the first Steelers’ RB with 23+ carries in consecutive games since James Conner did so in Weeks 8-9 during the 2018 season. Harris had 23 last week, 24 Sunday night.

– As the NBC broadcast pointed out tonight, Eric Ebron had the first rushing TD by a Steelers’ TE in team history. The last TE to log a rushing attempt was Vance McDonald in 2019. Since 1980, only two other Steelers’ TEs have done it. Heath Miller and Warren Seitz. I know one of Miller’s, a six-yarder against Arizona, was a backwards pass that gets counted as a run.

– WR Diontae Johnson was responsible for the Steelers’ longest run (25 yards) and longest pass (23 yards) tonight. He’s the first Steelers’ wideout to accomplish that since Hines Ward in December of 2003, a win over the San Diego Chargers. Ward had a long run of 25 yards and a long catch of 28 yards that game. Very similar as Johnson against Seattle.

– With two more sacks Sunday, T.J. Watt now has 56.5 in his career. That ties him for 14th-most in NFL history through a player’s first five seasons and tied for 10th since sacks became an official stat in 1982. He’s currently tied with Curtis Greer, George Andrie, Charles Haley, and Dwight Freeney. Not bad company to keep.

– Watt recorded his 15th multi-sack game of his career Sunday, giving him sole possession of fourth place on the Steelers’ all-time list. He now only trails James Harrison (19), Jason Gildon (17), and LaMarr Woodley (16). Those guys will be passed soon enough.

– Watt also had three passes defended in the game, making him the first Steelers player to do so this season and the first LB since…Watt himself last year against Dallas. He’s the first non-Watt LB to do so since Ryan Shazier in 2017 and the team’s first OLB since Joey Porter in 2004, who had a whopping five of them in a win over Cincinnati.

– Tre Norwood had the first TFL of his NFL career and the first in a game since November 11th, 2018 as a member of the Sooners when he notched one against Oklahoma State. Norwood is 3-0 in games when he records a TFL.

– Overtime certainly played a factor but Pittsburgh possessed the ball for 37:33 tonight. First game they’d had 37+ minutes time of possession since December 11th, 2016, a regulation win over the Buffalo Bills. In team history, the Steelers are 58-2-1 when they have the ball for 37+ minutes.

– Final one. Last time Pittsburgh got back to 3-3 after starting a year 1-3? That would be 2002, a year in which they won four in a row after a 1-3 start to the season. They would finish the year 10-5-1 and first place in the division. Hopefully they have similar success this time around.