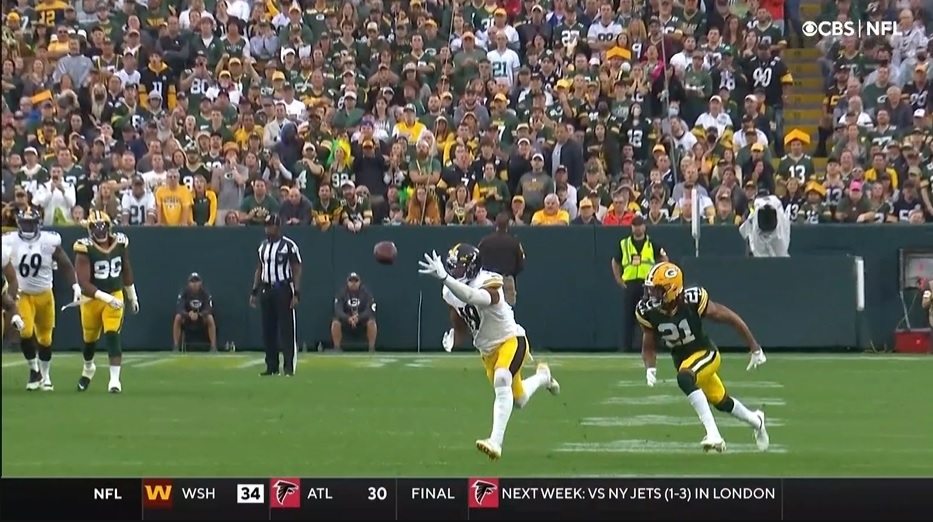 Another week of sad, weird stats. Let’s talk about it.

– The Pittsburgh Steelers haven’t scored more than 23 points this season. The only two teams to be held under 24 points in their first four games are the Steelers and Jacksonville Jaguars. Six of the Steelers’ points in their 23-point game against the Bills game via special teams, too.

– The Steelers are averaging 16.8 points per game so far this year. That’s fewer than what they recorded in 2019, the year with Mason Rudolph/Devlin Hodges, when they averaged 18.1 points per game.

– Pittsburgh’s drought of 11 games without an offensive point in the first quarter mercifully came to an end this weekend thanks to Ben Roethlisberger’s 45 yard touchdown to Diontae Johnson. It was only the second opening drive TD they’ve scored since 2019.

– A stat of the weird for the Packers. WR Randall Cobb had a multi-TD receiving day for the first time since 2015.

– Zach Gentry’s 10 yard reception today was the longest catch of his career since his final college game, December 29th, 2018.

– JuJu Smith-Schuster is the first Steeler with only two or fewer catches on 8+ targets since Martavis Bryan in 2017. JuJu’s two catch, 11 yard performance is the worst output of any Steeler with 8+ targets since at least 1994, as far back as PFR’s data tracks. Of course, he had a chance for two big plays that would’ve changed that story.

Watt the record holder through six years despite being in only his 5th NFL season.

– Green Bay scored 17 points in the second quarter. They’re the first offense to score 17+ points in a quarter since the Chargers had 17 in the fourth quarter of an October 13th, 2019 loss.

It’s the first time Pittsburgh has given up 17 points in the second quarter since October 23rd, 2014, a shootout win over the Colts.

– Pressley Harvin’s 20 yard punt was the shortest by a Steelers’ punter since Jordan Berry’s 18 yard boot in a 2015 game against the Cincinnati Bengals.

– Since the merger, this is only the 10th time in franchise history the team began a year 1-3. They made the playoffs just twice those previous nine times. 1976 and 2002. But they did it five times from 1990 to 2020 and never finished with a losing record any of those times.