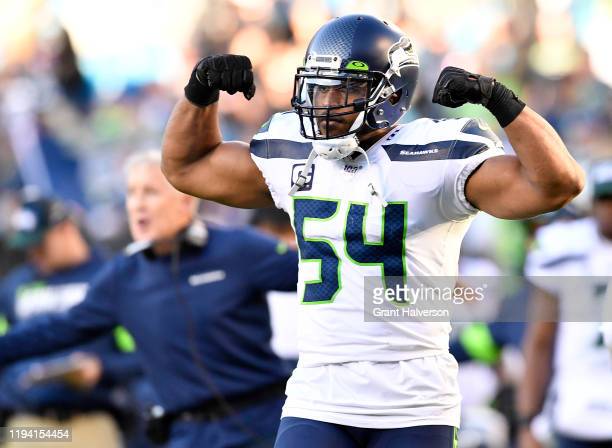 Seattle, as they have for the longest time, run a 4-3 front. Their run defense though has been rough to start the year. They’ve allowed 113+ yards rushing in all five games this season, including 212 to Derrick Henry and the Tennessee Titans earlier this year. It’s no surprise they are 31st in yards per game at 145.2. Their YPC number is slightly better, tied at 24th at 4.5, but far from good either. They’ve allowed 14 runs of 10+ yards and three of 20+. Those numbers aren’t great but aren’t terrible and speaks to the fact the yards/YPC aren’t a product of big, chunk plays but consistently good runs. Pittsburgh should have success like these other teams.

Their leading tackler is Bobby Wagner, one of the game’s top linebackers. 58 tackles this season are 2nd in the NFL, only trailing Denzel Perryman, while his 32 solo tackles are tied for second most in the league. Jamal Adams and Quandre Diggs are one of the best tackling safety duos in football. Adams has 37, Diggs has 36.

Their defensive line has a heavy rotation. Eight players logging 25%+ of the team’s snaps. Common for even front defenses to have a healthy, fresh rotation here.

I’d say there are two ways to best attack this run game. Gap runs with the guard pulling and the bend (backside read) on zone runs. Seattle fits the frontside of zone runs well, they’re generally gap sound, but you can use motion to move their LBs and can hit the backside/weakside when the front seven crashes down. Some examples of each.

Watch the FB motion cause the LBs to step away from the run here, helping to create the hole for the RB.

Here, the Rams’ back bends the run back off the hip of the LT and TE for a decent gain.

Though they won’t go ultra-heavy the way Cincinnati did in Week 3, Seattle will run show a 5-2 front with the LBs shifted over against heavy personnel grouped to one side. 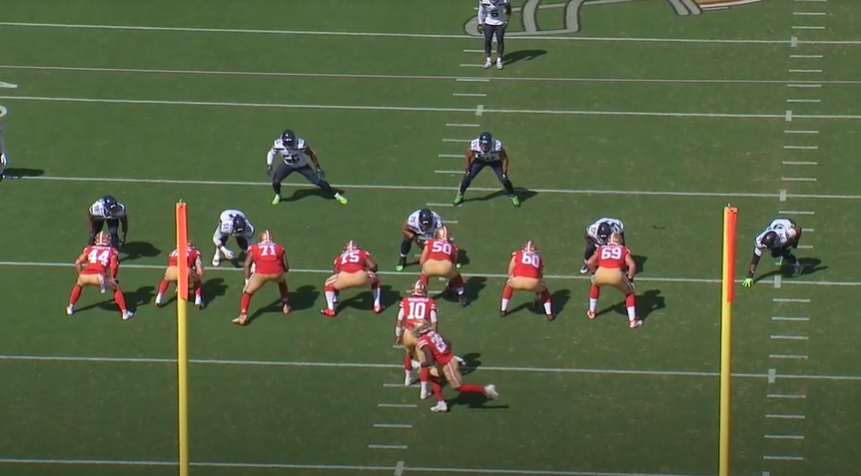 Some other defensive stats. As a team, they’re 22nd in football allowing 25.2 PPG. Their third down defense is 12th in football at 36% while their red zone defense has been even better, 6th in the league at 47.8%.

Though the Legion of Boom, Richard Sherman, Kam Chancellor, and Earl Thomas, are long gone, this defense doesn’t look substantially different in structure. But let’s talk numbers first. This group has ten sacks on the year. Darrell Taylor leads the team with four. No one else on this team has more than one. Eight of the team’s ten sacks are by the defensive line. The other two are by linebackers Wagner and Jordyn Brooks. Taylor is also one of three players with a forced fumble (one of which came on special teams by RB DeeJay Dallas.

Seattle only has two interceptions this season both by Diggs. Both have come in the last two games. Watch out for #6, enjoying a lot of success out west after getting dealt by Detroit. They have allowed 18 passes of 20+ yards (tied 15th in the NFL) and three of 40+ yards (tied for 13th in the league).

Scheme-wise, they still play a lot of Cover 3. It isn’t the old Country Cover 3, the spot-drop stuff that most teams (the good ones, anyway) avoid running these days. But you get a lot of three deep zone with the ability to match vertically. C3 appears to be one of their empty checks.

Also see a fair bit of Cover 2. Some traditional C2 and some inverted C2 as well. Seahawks’ front seven are aggressive, especially their LBs, and they will get sucked up and influenced by motion and playaction. Steelers don’t do it much but you can throw behind them with say, Pat Freiermuth. Wagner in that second clip did do a decent job of getting depth and forcing Matthew Stafford off the read but if the route is more vertical, there’s space for the throw with the MOF getting depth to protect against #1 vertical.

Their blitz and pressure rates sit middle of the pack. I didn’t identify any clear blitz tendencies from this defense in the film I watched. Against the Rams, they did send safety pressure twice from the boundary against 3×1 between the opponents 36 and 40 yard line. LA countered with a screen the second time and hit it for a good gain. As Seahawks’ beat writer Gregg Bell noted on Wednesday’s podcast, safety Jamal Adams is blitzing at about half the rate he did last season, a year in which he had 9.5 sacks. Defense has been less aggressive, blitzing about 10% less in 2021. Maybe that’s because they’ve had so many issues at corner.

Seattle comes to town in week six and while this is no longer the Legion of Boom there are quite a few talented players on this defense.  This Seahawks defense is giving up a ton of yards this season including at least 450 per game over the last four and that could bode well for the Steelers sometimes stagnant offense.  They shuffle in a lot of players at the first level of defense so let take a look at this defensive group.

The guy to keep an eye on up front is former undrafted free agent Poona Ford (97). He’s a defensive tackle with a very good motor and up field quickness.  He is in attack mode and will pinball his way bouncing of multiple linemen to get to the ball.  He has very good awareness and likes to use a double hand swipe in his pass rush. One time Steeler Al Woods (99) is a veteran presence in the middle. He’s a wide bodied defender, solid against the run and shows good quickness in his swim move. Bryan Mone (90) is a heavy handed player with play strength to reset the line or stack and shed defenders. He plays with good pad level and stays square to line of scrimmage.

The defensive end group includes Kerry Hyder Jr (51) who’ll play from the 3T out to the edge with solid snap quickness and hands, is solid versus the run and versus double team blocks while being stout against the run. Robert Nkemdiche (92) has good size and speed and is normally lined up as the 4i technique. He has the quickness to shoot gaps with good bend and flexibility getting after the quarterback.  L.J. Collier (91) is former first round pick who has not as of yet played up to that status.  He is solid at the point of attack, has a good punch and is a power rusher with stiffness in his hips.

Here is a look at the disruptiveness of Ford (97). He uses his quickness at the snap, slaps the hand of the guard while beating the tackle to the inside forcing the running back to alter his plan.

Rasheem Green (94) will play inside and outside and is a good run defender setting the edge or defending from the backside.  He has adequate snap quickness and relies on power rushes.  Carlos Dunlap (8) is the cagey veteran with good awareness and length.  His agility isn’t what it once was but he can still power rush to get after the quarterback.

Benson Mayowa (10) is lean with good length that is solid setting the edge and has good agility in space.  He is used often in Zone coverage in the curl/flat areas. Darrell Taylor (52) is pass rusher by nature with good play strength who varies his rush inside and outside of the tackle.  He uses a club in his pass rush and has good acceleration to the quarterback. Alton Robinson (98) is solid against the run and pass with good length and good use of hands.  He can bend on the edge or use a stab to gain the advantage on the edge.

Bobby Wagner (54) is still the man on the inside for Seattle.  He is a legit sideline to sideline player who excels at diagnosing plays.  He has good speed, takes very good angles to the ball and is a strong tackler. He averages double digit tackles is strong in coverage.  Jordyn Brooks (56) is also a strong tackler and works through traffic well when flowing to the ball. He will line up on the outside in nickel and will rush the passer. He’s a solid pass defender but can get flatfooted in Zone. Cody Barton (57) has solid play strength and mental processing with good Zone awareness drives through his tackles.  Nick Bellore (44) and Jon Rhattigan (59) are part of the group and spend their time on special teams.

Nice work by Wagner (54) to keep his eyes on the ball through the traffic, scrape of over the top and make the quick stop

Sidney Jones IV (23) is the left corner and has good feet to mirror in Press is solid in trail Man and has solid route awareness.  In Zone he has solid acceleration to close to the ball in his area.  D.J. Reed (2) plays on the right side and is a bit undersized. A solid tackler willing to help in the run game.  He looks better in Zone has good change of direction and good ball skills.

John Reid (29) has good competitiveness, quick feet and is physical at the catch point. Blessaun Austin (31) has good size and length, plays with good balance and good acceleration in coverage. He and Reid play mostly on special teams.

Reed (2) at the top of the screen reads the route, shows good change of direction and attacks the ball in the air for a pass break up

The Seahawks paid a lot to get Jamal Adams (33) and he made his mark immediately last season.  It’s not often you see a safety with 9.5 sacks in a season.  He will be used on all three levels as a split safety, in the box or to blitz. He has a physical play style willing to fill gaps but not the play strength to hold the gap. Quandre Diggs (6) is usually the deep safety in the middle of the field. He’s the centerfielder takes good angles to the ball and is a very good tackler as the last line of defense or coming downhill.

Marquise Blair (27) is a physical defender who plays in the slot in the nickel. He has good athleticism and speed and is solid in Zone but can struggle with quick slot receivers in Man coverage.  Ugo Amadi (28) is also used in the slot and he is better suited for Man coverage with quick feet, ball skills and good aggressiveness when coming downhill.  Ryan Neal (26) is a long and lean safety with solid speed that is usually tasked with covering tight ends or running backs in Man coverage.

Nice read by Diggs (6) here as he will jump the underneath route for the interception.