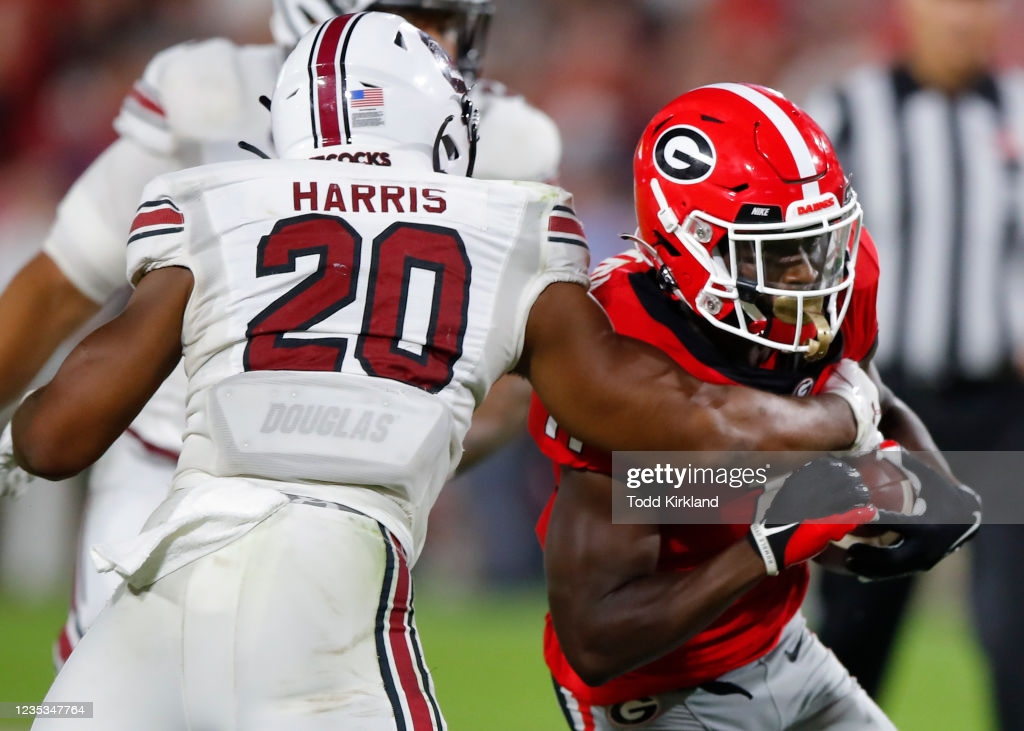 The Wolverines travel to East Lansing Saturday to take on in-state rival Michigan State in a winner-take all scenario as the victor keeps their College Football Playoff hopes alive and the loser likely eliminated from contention. For Michigan, all eyes will be on EDGE #97 Aidan Hutchinson for the Wolverines defense. The 6’6, 265lb senior made the surprise decision to return last year after being projected as a top-40 draft selection, and the decision has proven to be a good one. Hutchinson currently has 27 total stops (17 solo), five sacks, and a forced fumble this season and has provided consistent pressure on opposing quarterbacks.

He has played both in a standup position and with his hand in the dirt, having the versatility to play both as a 4-3base defensive end or as a standup 3-4 outside linebacker. Hutchinson currently is one of the favorites at EDGE to go in the first round after standout Oregon EDGE Kayvon Thibodeaux, and a strong performance against the rival Spartans can help cement his status as EDGE2 in the 2022 NFL Draft.

On the opposite side for the Spartans, the offense will be relying once again on RB #9 Kenneth Walker III to carry the load. The 5’10, 210lb junior has enjoyed a breakout campaign for Michigan State, toting the rock 152 times for 997 yards (6.6YPC) and nine rushing scores in seven contests while throwing in five receptions for 25 yards and a score. Walker has a good blend of size, strength, burst to his game along with the vision to see running lanes open and hit the hole hard.

He isn’t a speed demon in the open field, but he has great contact balance and evades tacklers when he reaches the second level, having the power to run through defenders when he gets a head of steam and finish falling forward. He is the type of back you want to spearhead a physical rushing attack and will look to establish his presence on the ground early against the Wolverine defensive front as he attempts to break 1,000 yards on the season and impress scouts.

The Hurricanes will be clear underdogs as they travel to Heinz Field Saturday to take on the Panthers who are coming off a big win against Clemson. If Miami has any hope of pulling of the upset, WR #11 Charleston Rambo will have to have a big day through the air in this matchup. The 6’1, 185lb junior transferred from Oklahoma after playing the downfield, field stretcher role for the Sooners in attempt to garner more looks with the Hurricanes. Currently, Rambo has 44 receptions for 549 yards (12.5 YPR) and four TDs on the season with his biggest games coming against Michigan State and NC State last week.

Rambo is a true deep threat, having the speed to challenge defenses vertically (60 yard long came last week), but also can work the intermediate of the field and create after the catch. Rambo also has experience as a kick returner, adding to his potential draft value. Should Pittsburgh be looking for a receiver that brings a speed element to the offense but doesn’t want to spend up with a high selection, Rambo could be an interesting target later in the draft.

For the Panthers QB #8 Kenny Pickett is the hot name generating all the buzz as a potential Heisman candidate as well as a QB prospect. The 6’3, 220lb senior had a good showing last week against the Tigers as I highlighted in a previous film room, showing poise in the pocket, and making plenty of plays on the run down the field as a passer as well as with his legs. Plenty of national media outlets and scouting agencies are starting to recognize Pickett as a Top 3 QB in this year’s draft class, and his play this far deserves recognition. Given how Miami has struggled recently on defense, Pickett should have a day Saturday to confirm his ranking as a top-tier QB.

The annual SEC clash between Florida and Georgia in Jacksonville Saturday will garner plenty of media attention but may end up being a bit of a letdown. The top-ranked Dawgs have looked dominant thus far, rolling nearly everyone that they have faced. If the Gators hope to stay in this one, defensive captain DL #6 Zach Carter must have a day both in stopping the run as well as generating pressure as a pass rusher. The 6’4, 285lb senior has taken his game to another level this season, posting 17 tackles (nine solo), six sacks, and a forced fumble thus far in 2021. He has the size to kick inside the guard but the athleticism to matchup head up or outside shade of the tackle.

Having the opportunity to work with Carter back in 2018 with the strength and conditioning department, I can personally attest that the man passes the eye test and has since then matured even more physically as well as a technician on the football field. His versatility and character should make him a sought-after prospect that can play up-and-down the defensive line in the league. Given the injury concerns with Stephon Tuitt and Tyson Alualu as well as the age of Cam Heyward, Pittsburgh could look to Carter to provide a potential replacement on the defensive line with a player hitting his stride this season.

For the Bulldogs, much has been made about their vaunted defense and rightfully so. While a lot of credit has been given to the defensive front, my eye will be on CB #11 Derion Kendrick. The 6’0, 190lb senior transferred from Clemson prior the season after leaving the team and shortly after was arrested in Rock Hill, SC in March due to gun and drug charges and was issued a citation for simple possession of marijuana.

The former highly touted wide receiver recruit comes to Georgia developing as a cornerback the last few seasons, being raw but oozing athletic upside thanks to his speed, explosiveness, and frame. He currently in allowing one reception every 39 coverage snaps via Pro Football Focus, ranking first in the nation. Obviously, Kendrick’s background and character will have to be vetted in the pre-draft process, but the defender seems to have found new life in Athens and has a chance to hear his name called early on this spring should the character check out.

Kentucky was one of the teams to experience the dominance of the Dawgs and will look to get back on-track against Mississippi State. The defense will be led by DL #4 Josh Paschal who serves as the do-it-all, lead by example captain for the Wildcats. The 6’3, 278lb senior plays all over the place, lining up anywhere from on the edge outside shade of the tackle to as a 1-technique in the A-gap as an inside penetrator. Paschal has a motor that just doesn’t stop, relentlessly pursing the football and plays a fair amount of special teams snaps, having several blocked kicks on his resume this season.

His impact far exceeds what he has on the stat sheet (30 total tackles, one sack, one forced fumble), as he was a game wrecker against my Gators to help them get the upset in that matchup. A little bit of a tweener, Paschal can do a lot for his draft stock by continuing to be a leader for the defense and help the Wildcats control the LOS in this one to get the win on the road.

Paschal can probably expect to see OT #67 Charles Cross who headlines the Bulldogs’ offensive line. The 6’5, 310lb redshirt sophomore has bulked up a fair amount since arriving on campus, but still presents a long, lean, athletic frame. He looks the part of an NFL OT, and his ply matches up, having the quickness out of his stance in pass protection to keep pass rushers from getting the edge as well as the strength, power, and physical demeanor to get out in space in the running game and displace defenders in his path to clear wide running lanes.

Cross has been receiving recognition as potentially the top OT in this draft class and given his youth and room to add more functional mass to his frame, it can be argued he is only scratching the surface of what he is capable of. Given the need to solidify the offensive line, should Cross be on the board when Pittsburgh is on the clock, they will have to give a good, long look at a prospect that has a high athletic ceiling and can become a potential mainstay on the blindside for the next decade.

The game of the week that features College Game Day is the primetime matchup between the Nittany Lions and Buckeyes in The Shoe Saturday night. While many will have their eyes on the flashy wideouts for either team, by focus will be directed to a couple of defenders, specifically LB #12 Brandon Smith for Penn State. The 6’3, 241lb junior has been described as a freak show by scouts that have been on campus, having the size, speed, and explosiveness you look for in today’s off-ball linebacker.

A strong blitzer that pursues the QB with great effort, Smith still is raw when it comes to coverage and moving backward but has all the potential in the world given his athletic traits. He has been labeled as the next great Penn State linebacker in a similar mold to recent draftee Micah Parsons, although his stats wouldn’t suggest that (44 total stops, two sacks, one forced fumble, and two pass breakups). Should the Nittany Lions hope to pull off the stunner in Columbus, Smith will have to be on his A-game stifling the dangerous Buckeye rushing attack while chasing down C.J. Stroud as a pass rusher to help get the win while give him great exposure on the national spotlight.

For the Buckeyes, my eyes will be on CB #7 Sevyn Banks. The 6’1, 200lb senior has missed much of the season due to a knee injury and has since returned to play in the last two games, recording four tackles and a pass breakup. Banks earned honorable mention All-Big Ten honors last year and came into 2021 as one of the favorites to be possibly the second CB off the board after LSU’s Derek Stingley Jr., but has since been uninspiring in his return to the field. The Buckeyes will likely be relying on Banks to contain opposing WR Jahan Dotson from tearing them apart in the secondary, and should Banks limit Dotson’s impact in this matchup, he can regain some draft stock.