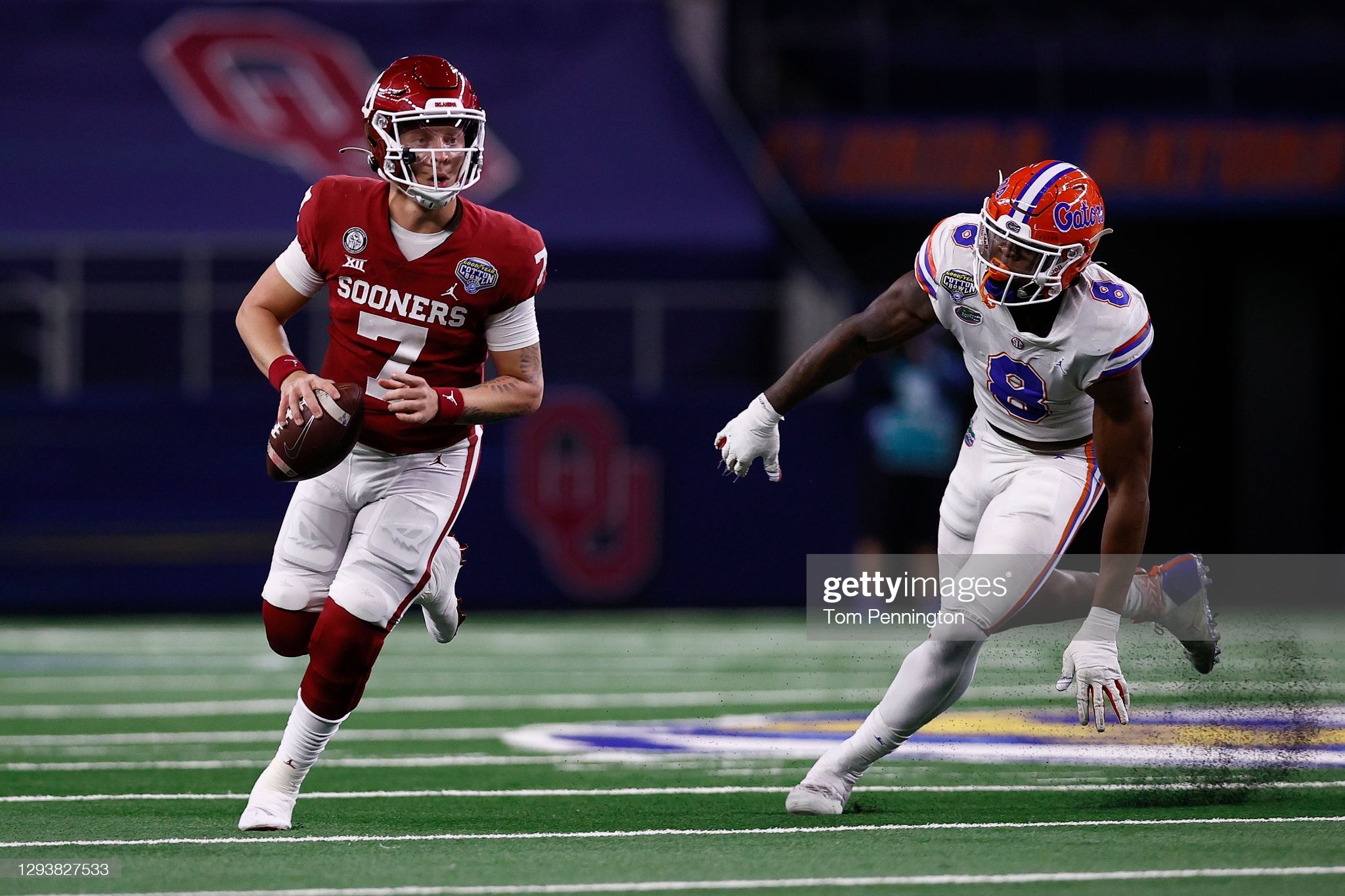 After taking a beating in Tuscaloosa this past weekend, the Rebels will host the Razorbacks who were shut out in Athens by the Bulldogs. For Ole Miss, QB Matt Corral will look to have a greater impact in the stat sheet against a good Razorback defense but is likely more exploitable than the Crimson Tide. Corral impressed me personally last week, making smart decisions and taking care of the football while being pressured all afternoon by the Tide defense. Arkansas boasts an aggressive defensive front as well, and if Corral can take care of the ball and put together some big scoring drives with his talented arm as well as his legs, look for him to continue to build his case as the potential QB1.

For the Razorbacks, the key to the game is bottling up Corral and preventing him from beating them through the air. The Arkansas defense will rely heavily on S Jalen Catalon to accomplish this task. Catalon is a redshirt sophomore who is a compact safety prospect (5’10, 200lb) that can be a heat-seeking missile on the football field, blowing up receivers over the middle separating ball from man. Built in a similar mold as former NFL safety T.J. Ward, Catalon also has a nose for the ball, possessing the ball skills be a ballhawk in the secondary. With S Terrell Edmunds playing on the final year of his deal, Catalon could be a viable replacement next to Minkah Fitzpatrick on the backend of the defense.

The red River Rivalry renews itself this Saturday pitting the Sooners against the Longhorns in Dallas, Texas. For the Sooners, all eyes will be on QB Spencer Rattler who has been off to a rough start to begin the 2021 campaign. Touted as the #1 QB prospect early in the scouting process and a possible favorite to go #1 overall in the 2022 NFL Draft, Rattler has struggled to live up to the hype, completing 122-of-160 pass attempts (76.3%) for 1,260 yards and ten TDs to go with four INTs while adding in 35 carries for 95 yards (2.7 YPC) and two scores on the ground in five games played.

Thus far, Rattler has only logged one game over 300 passing yards on the year, and the Sooners have played tight games against Tulane, Nebraska, West Virginia, and Kansas State to start the season, only winning by one score in all those contests. For a team with national championship aspirations, this should not be the case. Rattler’s arm talent is undeniable, as he effortlessly slings the ball all over the field from a variety of platforms. However, he seems to panic at times when the play breaks down, and he isn’t the physical specimen (6’1, 200lb) to avoid pressure consistently in the pocket and create with his legs. Rattler will be heavily scrutinized come the spring, but a strong performance Saturday will do him wonders.

For the Longhorns, the key to victory is slowing down Rattler and the talented Sooner offense. If Texas can stifle the run and make Oklahoma one-dimensional, they have a good shot at the upset. DT T’Vondre Sweat will be key in shutting down the rushing attack, being a large human in the middle of the defense (6’4, 335lb) that has the size and strength to anchor the LOS and two-gap the OL and allow linebackers to make plays. Sweat also does a good job pushing the pocket from the interior, putting pressure on the QB to throw the ball early. If Alualu can’t recover from his ankle injury this offseason effectively, Sweat could be in consideration for Pittsburgh.

Being an Iowa native, the clash between the Nittany lions and Hawkeyes Saturday afternoon in Kinnick Stadium will be the highest profile game in Iowa City since 1985 when Hayden Fry graced the sidelines. While many will have their eyes on the passing game and defense in this game, my eyes will direct to the big nasties upfront. For Penn State, OT Rasheed Walker has specifically stood out to me with his play against Auburn and Indiana, generating a great push in the run game and having sound technique in pass protection. Given the strength on the Iowa defense, Walker will have to have a big performance to keep QB Sean Clifford clean. If he dominates the LOS, look for Walker’s draft stock to rise.

The Iowa Hawkeyes are known for developing solid NFL-caliber players along the offensive line, and this season, C Tyler Linderbaum looks to be the next in-line to follow his predecessors to the pros. Having worked with Linderbaum back in 2019 in the strength and conditioning department, his strength and explosiveness are incredible to see in a weight room, and that translates to the football field. He is fluid out in space, picking up blocks with ease at the second and third levels of the defense, burying defenders into the turf. If Iowa wants to have chance in this game, they will have to dominate the LOS, specifically with Linderbaum leading the way as he tries to cement his status as Center #1.

After taking care of business last week against Ole Miss, the Crimson Tide will travel to College Station to take on the Aggies in a hostile environment. Since Texas A&M boasts a stout defensive front, Alabama may need to attack the defense more through the air this time than on the ground like they did this past weekend. If this is the case, look for WR Jameson Williams to get involved early and often. I highlighted the speedster in a recent article, depicting Williams as a vertical threat that can take the top off the defense as well as create splash plays in the return game. Should Pittsburgh look for a deep threat to stretch defenses vertically this spring, Williams should be on their radar.

If Texas A&M wants any chance to force the upset at home this week, they will have to force the Tide to get into passing situations and not get dominated up front against the run. DL DeMarvin Leal will be vital to making this happen for the Aggies, as he is arguably their most talented defender. Leal boasts the frame of a traditional 4-I DL (6’4, 290lb) with the strength to hold his own against the run as well as the athleticism to pursue the QB as a pass rusher. He has 4.5 sacks already on the year and will look to add to that total this weekend.

Given the recent injury to Tyson Alualu, the uncertainty of Stephon Tuitt moving forward, and Cam Heyward getting up there in age, Pittsburgh may elect to rebuild the offensive and defensive lines this offseason to establish an identity of physicality. Leal would likely require a high draft choice, but the payoff for a player of his caliber could be well worth the investment.