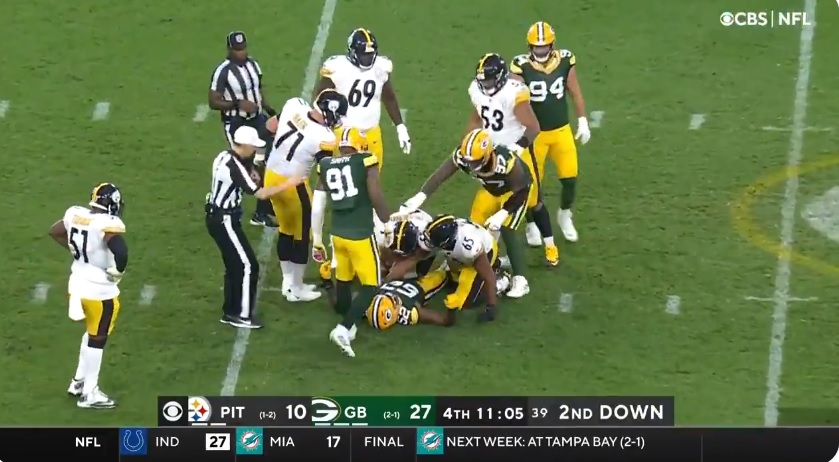 Hello darkness, my old friend
I’ve come to talk with you again
Because a vision softly creeping
Left its seeds while I was sleeping
And the vision that was planted in my brain
Still remains
Within the sound of silence

Through four weeks of the 2021 season for the Pittsburgh Steelers, it’s been mostly darkness for the black and gold, as a disastrous showing Sunday on the road at Lambeau Field against the Green Bay Packers led to a dismal 27-17 loss.

A touchdown was taken off the board on a blocked field goal, the Steelers couldn’t convert on multiple fourth downs, couldn’t generate a pass rush or slow down the run, and generally waved the white flag in the second half of a game that was nowhere near as close as the final score suggested.

There’s a very large problem offensively that has become the elephant in the room, and the defense — while seemingly healthy on paper at this point — can’t do it all on its own.

When Ben Roethlisberger and the Steelers came out firing to open the game, scoring a touchdown on the opening drive for the first time in what feels like years, things seemed to be trending in the right direction. Roethlisberger looked sharp, stepped up in the pocket to avoid pressure and threw an absolute dime to Diontae Johnson for the game’s opening score.

After that, it was all downhill for Roethlisberger in a game in which he became the eighth QB in NFL history to reach 400 passing yards and passed former Miami Dolphins star Dan Marino for sixth all-time in passing yards.

Roethlisberger missed on a number of throws, including missing JuJu Smith-Schuster wide open down the middle of the field on two throws that should have been walk-in touchdowns. Instead, both passes sailed over JuJu’s head, resulting in ugly misses from the veteran quarterback.

He also continues to throw short of the sticks on third and fourth down, and just isn’t elevating the Steelers’ offense like many expected him to in his return this season.

I don’t know how things improve with No. 7 at this point. It’s a train wreck top to bottom offensively, and becoming more and more clear that the play from the quarterback position simply isn’t cutting it.

Finally, the Steelers were able to move some bodies up front and let Najee Harris show what he could do on the ground.

I was really pleased with what I saw from Harris overall on the ground as the rookie had his best rushing performance of the season, rushing for a career-high 62 yards on 15 carries, adding his first-career rushing touchdown late in the loss, capping off a strong day on the ground.

Harris faced off against some lighter boxes and really ran hard downhill, punishing defenders in his way, allowing the Steelers to have some semblance of a run game early.

Out of the backfield, Harris did some damage underneath, adding six catches for 29 yards, including a terrific chain-moving catch and run in the third quarter that saw him break a tackle and run through a number of defenders to move the chains. He’s a special talent on a woeful offense.

Benny Snell Jr. continues to get some run in the backfield and just isn’t getting the job done. Snell was held to no gain on his lone carry of the game, dropped his lone target, and also fell down on a route late in the game when Roethlisberger was about to look his way. He’s a mess back there.

It was so great to have Diontae Johnson back in the fold Sunday. The Steelers’ passing attack was much improved with him on the field and able to win one-on-one situations on the boundary. Johnson finished with a game-high nine catches for 92 yards and a touchdown, which came on the opening possession for the Steelers.

He was the Steelers’ biggest threat throughout the game, and was consistently open.

James Washington had a really strong game in place of the injured Chase Claypool, finishing with four catches for 59 yards, including a 30-yard catch over the middle of the field in the fourth quarter to help set up Harris’s rushing touchdown.

The one who should be really frustrated after the loss is Smith-Schuster. He consistently won his one-on-one matchups over the middle of the field, working vertically to get open. Roethlisberger just couldn’t put the ball on him with poor throws, taking away at least two would-be touchdowns. He was visibly frustrated on the sideline, and I don’t blame him one bit. He did his job getting wide open.

Smith-Schuster finished with just two catches for 11 yards on a day in which he should have easily had 100 receiving yards and at least one touchdown. He was also the sacrificial lamb on a fourth and short play in which Roethlisberger threw a crossing route to him that had no chance of moving the chains, asking Smith-Schuster to make multiple defenders miss.

Though this group overall combined for just four catches for 29 yards, I really was pleased with the overall usage of Pat Freiermuth, Eric Ebron and Zach Gentry.

Freiermuth and Gentry got a lot of run on Sunday, with Gentry serving as more of an extra blocking tight end in 12 personnel, allowing the Steelers to still have some sort of passing game out of the formation. Though Freiermuth and Gentry had just one catch each, I liked their impact on the game overall, especially in the run game.

They landed blocks, moved some bodies and helped spring Harris for some key runs. Plus, they drew attention in the short middle of the field, opening some things on the outside for the Steelers.

Eric Ebron appears to be getting out snapped at this point, which should tell you all you need to know about his role within the offense.

This was a great improvement from the previous week, and it still wasn’t very good.

While the group helped run the football much better in this one, they still struggled to protect Roethlisberger.

I though Joe Haeg was really solid at right tackle in this one. He never really had issues in pass protection and was often moving some bodies in the run game. I’d like to see more of him to see if he can be an improvement over Chukwuma Okorafor until Zach Banner is ready to go.

Kendrick Green mostly held up decently against Kenny Clark. I saw Green quickly lose a handful of reps in the run game and in pass protection, but he wasn’t a disaster like the previous week.

This is a solid step in the right direction for this group. Let’s hope Kevin Dotson’s injury isn’t too serious.

I did not like anything I saw from this group in the game. Cam Heyward can’t do it all on his own.

That said, the captain certainly tried, finishing with eight tackles, a tackle for loss and a quarterback hit in the loss. He played his tail off, but the Packers doubled him quite a bit, stunting his pass rush and moving him off the point in the run game.

Chris Wormley really had a rough game against the run, getting washed down the line to open up cutback lanes, and was generally slow to get off blocks throughout the game. Henry Mondeaux and Isaiah Buggs were no better. It was a really rough showing for Buggs, who was moved off the line often and was a bit overwhelmed throughout.

This group simply didn’t generate a pass rush at all. Get healthy soon, Stephon Tuitt.

The inside linebackers were really good on Sunday. A lot of what they did won’t show up in the stats sheet, but Devin Bush and Joe Schobert were phenomenal in pass coverage.

Bush carried the tight ends up the seam with ease throughout and had a nice night dropping underneath to take away crossers and stop routes from Aaron Rodgers and Co. Schobert was very similar to Bush, carrying tight ends and running backs well, and even broke up a key pass in the end zone intended for Aaron Jones, playing the ball well.

Those two are a very strong tandem. I wish they were appreciated more. Oh, and they also combined for 14 tackles and a sack, as Bush was a menace blitzing from all over the formation. More of that, please.

Outside, T.J. Watt really labored through this game. He didn’t appear close to 100% and had a heavy wrap on his ankle, which slowed him down some. That said, he was the only one to truly generate consistent pressure, finishing with two sacks, one of which was an uncalled trip. Take them however they come though.

Instead, the Steelers lost in a game that wasn’t as close as the final score. With so much focus on Adams, the Steelers lost Randall Cobb in the middle of the field, allowing the veteran receiver to do something he hadn’t done since 2015: catch two touchdown passes in the same game.

Cobb was the difference maker, burning Terrell Edmunds on his first touchdown and then beat Minkah Fitzpatrick on a pivot route along the goal line for his second score. I thought the two safeties were decent throughout theme, but Fitzpatrick had a dropped interception on a scoring drive for the Packers.

Joe Haden and Cameron Sutton each recorded a pass breakup on the day, but neither was truly impactful in the passing game, allowing the Packers to methodically move the football down the field.

I thought Arthur Maulet was really good near the line of scrimmage in this one. He blitzed well, played the run even better and was a sound tackler. He seems to be really settling into his role in the slot.

This group really got the short end of the stick on the blocked field goal and return for touchdown, which was wiped out due to a phantom offsides call. Joe Haden timed it perfectly and stressed the end-of-line blocker allowing Minkah Fitzpatrick to block the field goal and return it 75 yards. It was a horrible call.

Aside from that, Chris Boswell rebounded from a missed field goal last week to drill a 52-yarder on the road in wet conditions, while the coverage units were much better this week.

Rookie punter Pressley Harvin III had an UGLY 20-yard punt from deep in Steelers’ territory that gave the Packers a very short field, that led to a score. Inconsistency continues to be an issue with the rookie, who downed one punt inside the Packers’ 20 yard line.