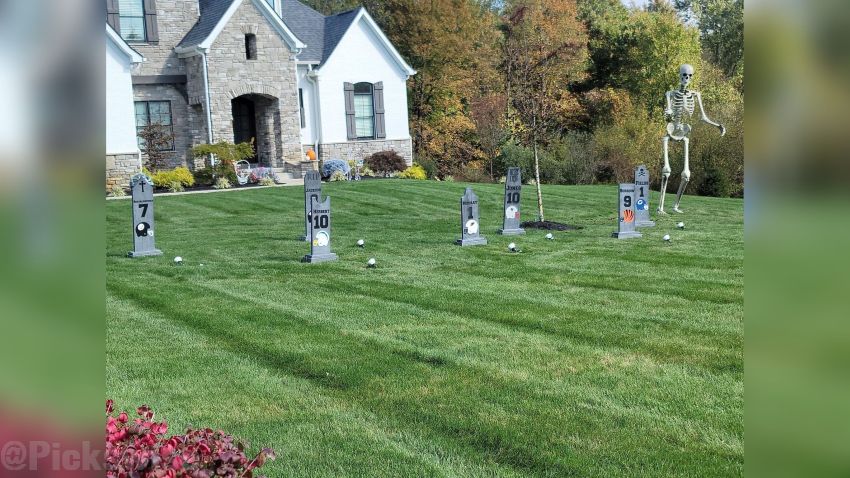 Myles Garrett is certainly never one who has been bashful. He said before the 2017 NFL Draft that he would make the Cleveland Browns regret it if they passed on him with the first overall pick—even though he also was seen on video saying that he wanted the Dallas Cowboys to trade up and get him instead.

He introduced himself to the league in a commercial that showed himself putting a picture of Pittsburgh Steelers quarterback Ben Roethlisberger through a paper shredder. He’s certainly shredded some offensive linemen since then and done some damage to quarterbacks—sometimes a little too zealously.

With Halloween around the corner, Garrett took it upon himself to spice up his lawn with some decorative flair—a cardboard graveyard filled with the graves of the quarterbacks that he has sacked in his career, with Roethlisberger prominent.

“I’m kind of a troll, a little bit”, he told reporters on Friday when he was asked about the backstory behind the idea. “People in my house like to have fun. My family, my friends, they thought it would be something cool to do for Halloween, because I’ve always loved Halloween”.

Myles Garrett on his QB cemetery: “I’m kind of a troll…” #Browns pic.twitter.com/zXTf8qgX34

Like him or not, Garrett has been the sort of player who walks the walk to back up his talk, and is one of the best edge rushers in the game, still just 25 years old now in his fifth season. He currently leads the NFL with seven sacks, four and a half of which came in one game, which set a new franchise record.

The former first-overall draft pick is now up to 49.5 sacks for his career in 56 games played. He ranks fourth in the NFL in sacks since his draft year, behind only Aaron Donald (60), Chandler Jones (55), and his draft classmate, the Steelers’ T.J. Watt (54.5). Roethlisberger has been on the receiving end of five of those sacks. He did get Landry Jones once.

Interestingly, it is actually the New York Jets against whom he has recorded the most sacks, with a total of eight across four different games. His six sacks against the Steelers are the second-most against any one team, tied with the Chicago Bears (since he shared on 4.5 sacks against them earlier this year). He has five sacks against the Cincinnati Bengals, but just two against the Baltimore Ravens.

Garrett’s next crack at Roethlisberger will be scary. It will take place on October 31, Halloween, in Week 8. The Steelers will be coming out of their bye week in advance of that one in Cleveland, so hopefully they’ll be nice and rested.