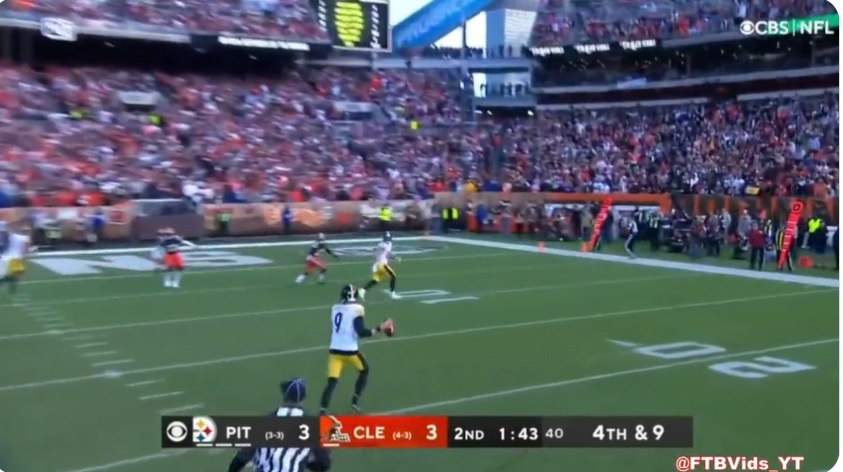 Pittsburgh’s trick was no treat Sunday afternoon, a fake field goal that ended in disaster for the play and the rest of the game. But the Steelers won so the disaster serves as just a footnote of the victory, not a headline had the team lost. Result-aside, Mike Tomlin took the blame for the ugly result. Tomlin said he was satisfied with the win despite the hurdles Pittsburgh had to overcome.

“Particularly with the adversity we faced today,” Tomlin told reporters after the game. “Some of which was created by us. Some of which was created by me. The fake field goal was a bad call because we poorly executed it. So I take responsibility for that. I appreciate the guys backing my play and fighting for sixty minutes and delivering in victory.”

If you can watch it without covering your eyes like the world’s scariest movie, here’s a replay. Kicker Chris Boswell rolling right, having nothing open, and firing the ball to Zach Gentry in a crowd of Cleveland brown. The pass was incomplete and Boswell took a big shot – a penalty missed by the officials – that has him in concussion protocol.

Tomlin was asked to explain why he called it.

“We were just playing to win. Playing aggressively. Ball was on the left hash, we had a look that we liked. We just didn’t execute it very well. The ball wasn’t snapped in a timely manner and it allowed them to take a picture of it. When that happens, you’re not going to be successful. But again, I take responsibility for it. I shouldn’t have called it unless we were ready to run it with detailed execution. And it’s obvious we weren’t. So that’s on me.”

It’s unclear if Boswell will be able to return. He will have a couple extra days to clear protocol with the Steelers not playing again until Monday night against the Chicago Bears. Playing without a kicker is an uncomfortable place to be. But the team rallied and managed, just as they have throughout their three-game winning streak, including a massive win today against the Browns.