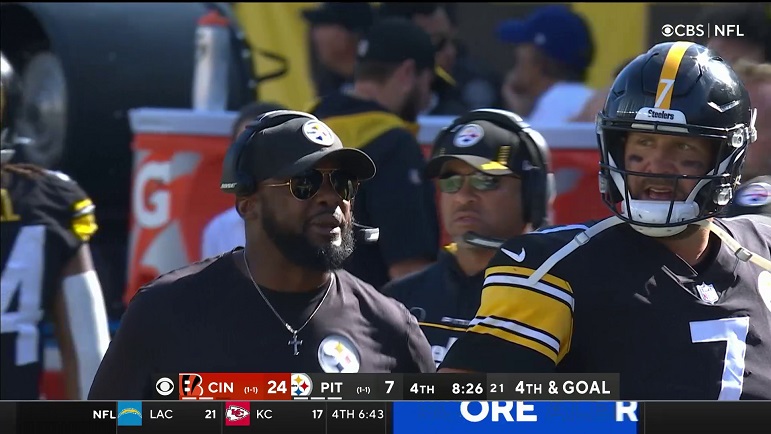 Pittsburgh Steelers quarterback Ben Roethlisberger has had a rough start to the 2021 regular season, and because of that, several analysts and fans believe he should be benched ahead of the team’s Week 5 game against the Denver Broncos. On Tuesday, Steelers head coach Mike Tomlin held his weekly press conference and during it he was asked if he believes that Roethlisberger is the best quarterback for the offense moving forward and if so, why.

“Absolutely,” Tomlin said. “You know, what he does and what he’s done makes me really comfortable in saying that.”

Roethlisberger, who is now dealing with a hip injury after first working through a pectoral injury that last few weeks, missed a few key throws in Sunday’s road loss to the Green Bay Packers. Two of those throws were deep ones to wide receiver JuJu Smith-Schuster, who was very open on both up the seam. Because of those bad misconnections that Roethlisberger had on Sunday, Tomlin was asked on Tuesday if he knows where the inconsistency with his quarterback might be coming from and if so, can it be fixed?

“You know, it’s him some, it’s us collectively some,” Tomlin said. “We’ve just got to keep working. You know, sometimes it could be attributed to altering of plans late in the week because of player availability or guys not being available. You know, we lost Chase Claypool in the middle of the week, or toward the latter part of the week, last week, so we had to alter our plans in some instances.

“But we’re not looking to make excuses. You know, we’ve had some big play opportunities, we hadn’t cashed in on them and we need to cash in on them. They’re a big component of moving the ball and scoring, particularly when you’re not working as efficiently as you’d like on possession downs, which we aren’t. Chunk plays eliminate a lot of execution, we say in the coaching world. And so, we’re going to continue to work to get better from an efficiency standpoint. We’re also going to continue to work to connect on a higher percentage of these chunk opportunities, because that aids us in terms of ringing up the scoreboard as well.”

“You know, I think Ben and I have been at our jobs long enough that we know and understand what comes with it,” Tomlin said. “We love Pittsburgh, PA. We love Steeler Nation and appreciate the passion that they have. And we understand the responsibilities that come with our roles, him being a quarterback, me being a head coach. Oftentimes we get too much credit when things are going well, and we’re always ready to absorb the negativity of our positions when things aren’t going well. That’s just life for us.”

Barring a new hip injury that Roethlisberger suffered on Sunday, he’s likely going to start against the Broncos at Heinz Field this coming weekend. He’ll likely also continue to start well past the team’s Week 7 bye week as well, if healthy enough to do so. In short, until the Steelers are eliminated from playoff contention, expect Roethlisberger to be the team’s starting quarterback as long as his health allows him to do so.