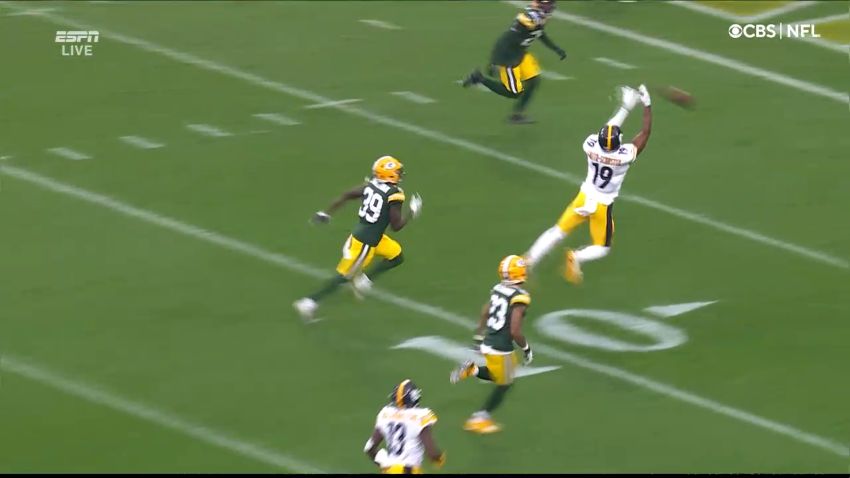 The Pittsburgh Steelers just lost to the Green Bay Packers by 10 points. They left at least that many points on the field with a few missed opportunities, as well. Would the result have been different if a couple of those plays swing another way?

We’ll never know, but it doesn’t matter to JuJu Smith-Schuster, the wide receiver who was the recipient of two of those significant swing plays. Twice during the game, he and quarterback Ben Roethlisberger just missed on downfield connections that should have been big plays. One of them would undoubtedly have scored. The other might have as well.

The first missed opportunity came late in the first half. With 1st and 10 on the Packers’ 32, Roethlisberger’s pass deep right to his most veteran receiver was just out of the reach of his fingertips. “We’ve just got to make those plays. I’ve got to make those plays”, he said. “I’m just frustrated. I’m frustrated because those are plays that I usually make down the field”.

He had open grass to the end zone had that ball been an inch or two lower, or his hands an inch or two higher. Unfortunately, they missed again midway through the third quarter, this from their own 20, deep left. Smith-Schuster was behind the defense. Again, the pass was just a bit long. Again, the receiver took it on himself.

“I make those balls. I make them in practice, and I fell short”, he said. “I take full responsibility and blame. I knew that it was gonna be a quick ball that was coming, I kind of took my eyes off of it, went up and tried to grab it. I didn’t make the play, and that’s something that I’ve got to get better at”.

Roethlisberger, for what it’s worth, also took responsibility, and if I were assigning percentage of blame, I would certainly lean more heavily to the quarterback with ease. Roethlisberger could have easily delivered more catchable passes, which is his job, and I’m not sure that Smith-Schuster could have realistically gotten to either one of the balls he was delivered. He ran a great route in particular on the first miss.

Pittsburgh ended up settling for a field goal after that first miss, making it a 14-10 game when they had a chance to tie. They were down 20-10 at the time of the second miss, and had to punt one play later, the Packers quickly responding with a dagger drive following a shanked punt. The ball simply didn’t bounce their way today.