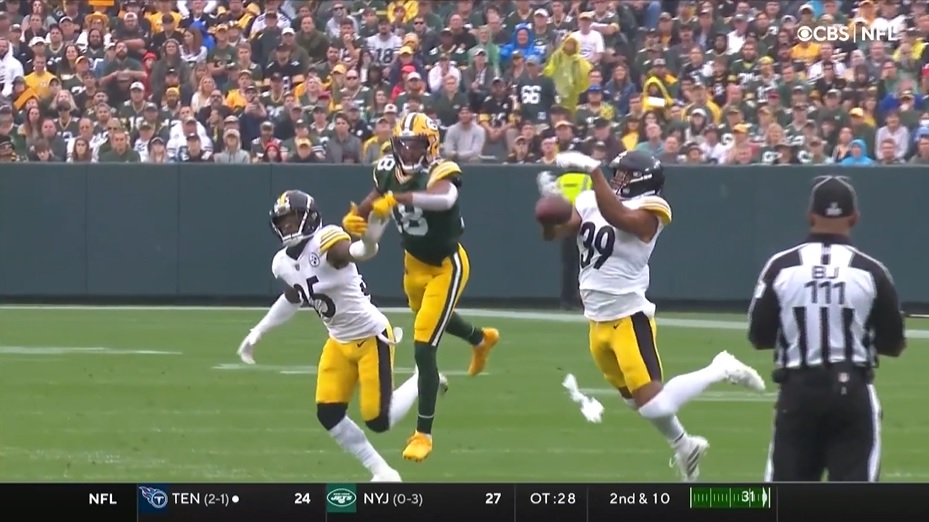 The Pittsburgh Steelers hasn’t been its takeaway-happy defense the way it has the previous two seasons, with just three of them in the team’s first four games. But considering how close the team has been in some moments, Joe Haden believes that script will soon be flipped.

Talking to reporters Monday, he expects the defense to soon return to making splash plays.

Yesterday was a day of missed opportunities in a 27-17 loss to the Green Bay Packers. Offensively, the team missed two big plays to JuJu Smith-Schuster, at least one of which would’ve resulted in a 32-yard touchdown. But there were similar problems defensively. Minkah Fitzpatrick dropped a sure interception from Aaron Rodgers in the first half.

For an offense struggling to make plays, the Steelers are reliant on a defense and special teams to make as much splash as possible. Fitzpatrick had that dropped INT and a blocked field goal touchdown negated by a controversial offsides call. A couple of game-changing plays that may have earned the Steelers their second victory instead of their third loss. Pittsburgh has next to no chance to claw back into this season, especially in a competitive AFC North, unless their turnover resembles something much closer to 2019 or 2020.

Haden said despite that fact, he doesn’t feel additional pressure to do his job.

“I wouldn’t say it’s pressure. I would just say that we feel like we can be the best defenses in the league. So it’s kinda, expected of ourselves. We expect ourselves to be able to play at that very high level.”