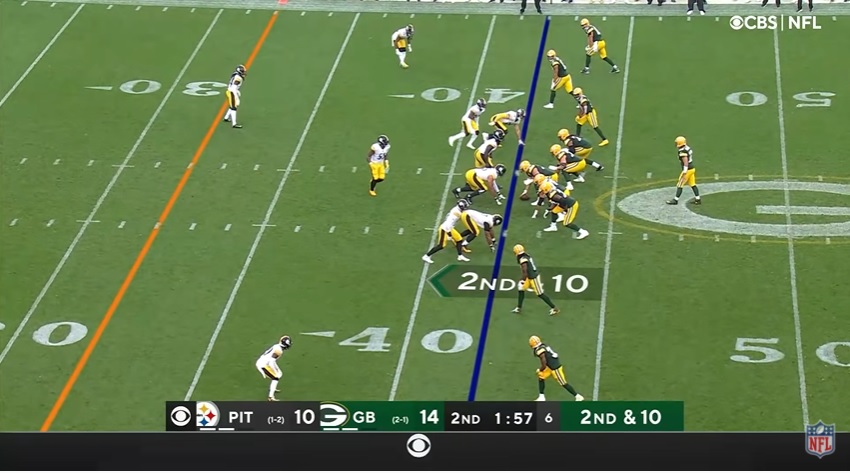 It’s often said that the NFL is a game of matchups. Last week the Steelers prioritized limiting the effect Davante Adams had on the game, with the Packers organization commenting how committed the Steelers were to doubling the star receiver. This meant that the Packers had to find other ways to attack the Steelers defense. I took a look at how they did this.

One of the ways the Packers attacked the Steelers last Sunday was the use of Empty formations. I took a look at every play where the Packers went Empty. Here’s what the tape tells us:

Before we start it’s important to explain what Empty is and also touch on personnel packages utilized by the offense and defense respectively.

Empty formation or Empty backfield simply refers to no RB (or WR or TE for that matter) aligned beside the Quarterback in the backfield at the start of the play.

In the NFL, defenses will ‘match personnel’ with the offense they are facing. If the offense comes out in 10 personnel (1 RB and 0 TE) a defense will normally respond by playing either Nickel or Dime depending on the down and distance and situation on the field. Protecting a lead inside of 2 minutes you can reasonably expect a team to run the ball even with four receivers on the field. Likewise, trailing by multiple scores in the fourth quarter a defense can expect an offense to throw the ball, even if they use a ‘heavier’ personnel package.

Below are some examples of personnel groupings. In the NFL a standard two number system is used to identify personnel.

On the defensive side of the ball coins are used to identify personnel groupings.

Depending on the defensive structure there will either be 4 DL and 3 LBs or in the case of the Steelers 3 DL and 4 LBs.

Naturally a defense can align in any of the sets above and still vary the number of DL and LB they have on the field. The Steelers’ Nickel package most commonly consists of 2 DL, 4 LB and 5 DB. Their Dime package is typically a 2, 3, 6 set with 1 inside linebacker being replaced by another DB.

Offenses use a variety of personnel packages to attack defenses and just because a team is in an Empty formation, does not necessarily mean that there are no RBs on the field. Last week Aaron Jones played every snap in the Packers Empty package. Jones, a versatile weapon and good pass catcher aligned at receiver in the six clips seen below.

Once the defense has matched personnel, the offense will then look to identify any mismatches. Such as a wide receiver against a linebacker and against the Steelers you don’t have to look far.

I’ve observed over the last couple of years (as have most Steeler fans!) that teams like to use 11 and 12 personnel and align in Empty vs the Steelers and exploit their linebackers in coverage. You may remember in last season’s wild card matchup, the Browns had a very similar game plan.

On their first play from Empty, Green Bay uses 12 personnel which is normally a run heavy personnel group. The Steelers respond with Base personnel in order to defend the run.

Adams is aligned in the slot to the three receiver side at the bottom of the screen. The Steelers are playing a split field coverage with Cover 2 to the two receiver side and what appears to be a zone match Cover 4 to the bottom of the screen. Haden and Minkah are playing a deep quarter to their side of the field with Watt and Bush playing the underneath coverage. The difference between zone match and traditional zone is that defenders will relate to receivers that enter their zone and not simply just cover an area of the field. In this coverage Bush has the first in breaking route and TJ has the first out breaking route.

We can see that Bush covers Adams as he is the first receiver in and therefore when Adams works back out the sideline Bush correctly stays with him. Unfortunately for the Steelers although Bush is a good coverage linebacker even the best DBs in the NFL struggle to match up with Adams and the Packers get an easy first down.

On this next play the Packers again come out in 12 personnel and the Steelers respond by coming out in Base. The Packers align in Empty and again target Devin Bush.

This time there is no in breaking and route and therefore Bush is responsible for being inside and underneath of the #3 receiver. He does a good job here of running with Robert Tonyan down the field. I do think Edmunds should be closer to the middle of the field to help with this route but the ball was incomplete so no great loss.

On this third play it’s a similar story for the Steelers. The Packers come out in 12 personnel, the Steelers respond by playing Base. The Steelers play the same coverage as the previous two snaps (you have to think Aaron Rodgers and the Green Bay coaches know what they’re getting by now) The Packers attack the Steelers linebackers and this time it results in a big gain.

On this occasion Bush mistakenly carries Tonyan down the field and this results in both Adams and Jones being open on the play. Minkah is responsible for Tonyan up the seam, Haden would play outside and squeeze the deep route with Highsmith squeezing the in route by Adams to Bush. Bush should cover Adams’ route and then can break on the ball thrown to Jones and make the tackle for a shorter gain.

Although Bush does play this badly this route concept is designed to overload the coverage and the Steelers have been outcoached by the Packers on this snap.

In the 4th Quarter the Packers go Empty formation with back to back snaps in the Steelers red zone.

The Packers run Tonyan up the seam against Joe Schobert who is in a good position and the ball is incomplete. We can start to see how the Green Bay continually targeted the Steelers linebackers in coverage.

On the very next play the Packers again align in 11 Personnel Empty formation. The Steelers this time align in Dime with Tre Norwood replacing Devin Bush. This time they are able to play man coverage due to the number of defensive backs they have on the field. The Steelers double Adams with Pierre in man coverage and Minkah playing over the top.

Aaron Rodgers again targeted Joe Schobert, this time the only Steelers linebacker in coverage. I would suggest that this is a mismatch for the Steelers as Aaron Jones is a dangerous receiving threat. Jones runs a simple fade route and Schobert does a really good job with no help. He aligns heavily inside to take away the inside breaking route and then makes a nice play on the ball (even possessing it once already out of bounds) forcing the incomplete pass on 3rd and long.

On the last play from Empty later in the fourth quarter the Packers come out in 11 personnel and the Steelers respond by coming out in Nickel with Arthur Maulet on the field.

On this occasion the Steelers played a three deep zone with Maulet covering the Flat, Melvin Ingram covering the Curl and Devin Bush covering the strong side Hook. Sutton has the deep third to his side with Minkah in the deep middle of the field. Rodgers attempts to fit the ball over Ingram and you can see both Green Bay receivers are anticipating the ball early as Ingram is late dropping out.

Whilst the Steelers have many more problems than just their strategy and execution defending Empty formation it’s noticeably clear that the Packers, and many teams before them, had a plan to target the Steelers linebackers in coverage and although there were some nice plays made by Steelers defenders, I would argue that they’re not being put in the best position to succeed.

I think the Steelers need to be more willing to get into Nickel personnel, however with the loss of Tyson Alualu and Stephon Tuitt still out the Steelers have been more susceptible to the run. I would anticipate that teams continue to attack the Steelers with Empty formations from heavy personnel groupings until the Steelers show they can defend it more consistently.