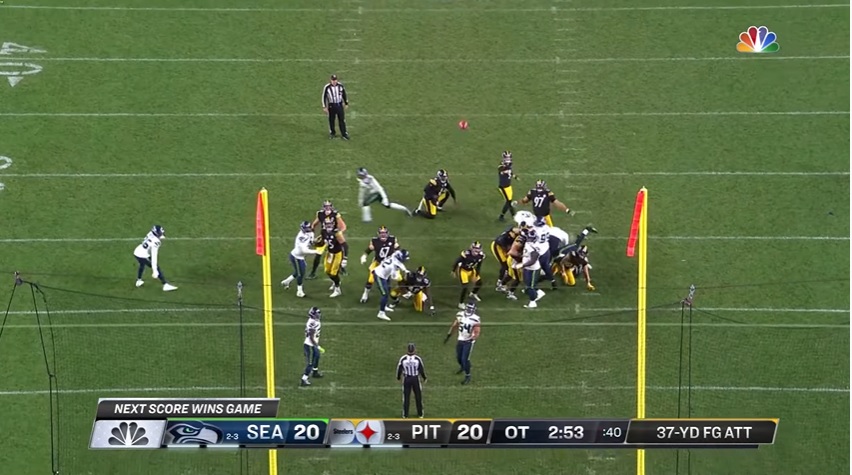 Like a true pro, Chris Boswell is always focused on his next kick.

But he can relish in his last one.

Boswell hit the game-winning 37 yarder Sunday night (or really, Monday morning) to beat the Seattle Seahawks and help get the Pittsburgh Steelers to .500 entering the bye week, climbing out of an ugly 1-3 hole the first month of the season. It was a perfect night for Boswell, hitting all four of his kicks including three field goals. His longest was a 52-yarder to give the Steelers a temporary 17-14 lead. After the win off his toe, Boswell was asked for his mentality going into each kick.

“I’m just focused on the next kick,” he told reporters via audio provided by the team. “After the game, obviously you think about stuff you did good, stuff you did bad and things you can correct. Try not get too high or too down on myself and try to stay, even-keel and just play throughout the season.”

It’s hard not to be humble about Boswell’s performance, another clutch one. He’s become one of the game’s better kickers hitting from 50+ yards out, going 4/4 from that range since last season. He also connected on a 51-yarder last week against Denver that was negated by a Broncos’ leverage call. Heinz Field isn’t quite as daunting a place to kick as it once was and the blustery December conditions haven’t yet to hit but Pittsburgh remains one of the hardest places to kick. Boswell makes it look easy. And he has the humility of someone who knows his job is defined by what he does next, not what he’s already accomplished.

“I can think about this game sometime in February.”

Boswell’s turnaround from that disastrous and likely injury-marred 2018 season doesn’t get discussed enough. Since 2019, Boswell mas made 59 of 63 field goal attempts, an absurdly good 93.7 field goal percentage while missing just four extra points. Entering this weekend, his percentage was the best in the league over that span, even edging out Justin Tucker.

Boswell’s performance Sunday only improves those numbers and keeps him in the top spot. In a year where NFL kickers are missing left and right, Pittsburgh has one of the game’s best. With an offense that won’t put up many 30-burgers, they’re going to need his services many more times the rest of the season.