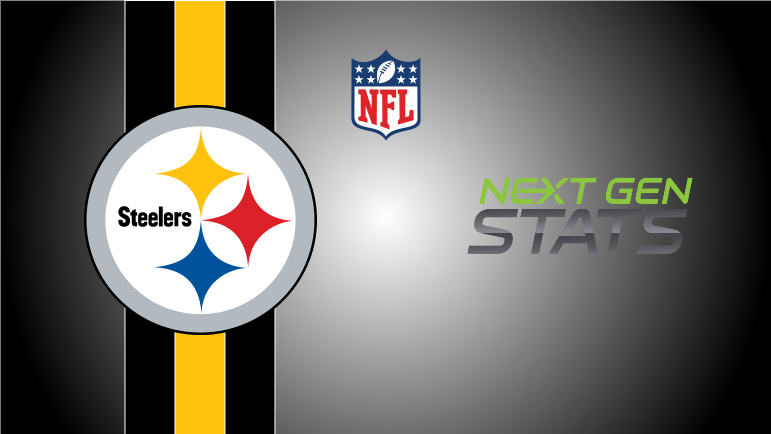 Week 4 is in the books, and as the sample size grows in the 2021 season, we are starting to see patterns, issues, and some improvements for the 2021 Pittsburgh Steelers offense. Quarterback Ben Roethlisberger has played poor, the offensive line made strides in the running game, running back Najee Harris benefited and is improving with each game, but unfortunately the wide receivers and Roethlisberger are still working out connection issues limiting the pass game.

Let’s start with the quarterback position with the following data points from Next Gen Stats for context: 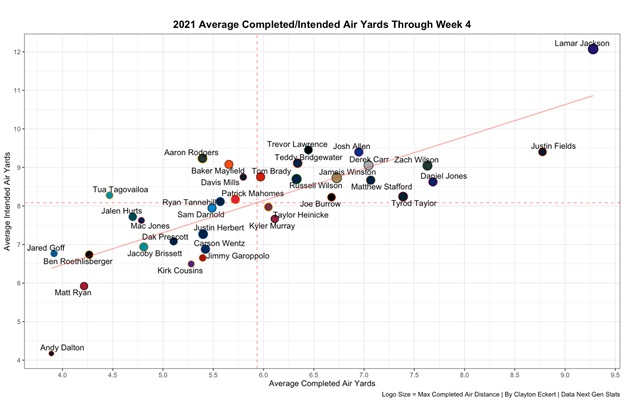 With a four-week sample size we see less outliers than earlier in the season, and really enjoyed seeing the mean lines (dashed lines) staying very consistent through each week of the season at approximately six average completed air yards and eight average intended air yards. Ben Roethlisberger has a low 4.3 average completed air yard number, which ranks 32nd out of 35 quarterbacks. His average intended air yards number of 6.7 ranks slightly better at 31st, which highlights the regularity of the short passing game and the issues missing down the field when he does take his shots. There have been good moments, like the 45-yard touchdown to wide receiver Diontae Johnson early in the Packers game but lacking regularity. It will be very interesting to see what these numbers look like over the next two games leading into the bye week.

Do you think the Steelers can connect more down the field the next two weeks? What are some of your favorite results league-wide?

I also wanted to see what the average time to the line of scrimmage stat looked like in week four when the Steelers running game had more success: 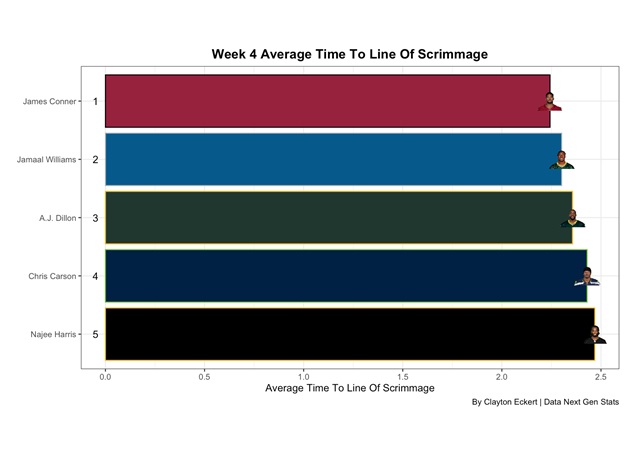 It was interesting to see Packers running back A.J. Dillon ranking third, highlighting the success he had against the Steelers defense last game. Najee Harris ranked in the top five in week four, highlighting the improvement by the offensive line in the run game and Harris making more decisive decisions on his carries. Here are his numbers by week for context:

AVERAGE TIME TO LINE OF SCRIMMAGE

The results are very telling and interesting pairing them with more generic stats:

If the offensive line can continue to trend in the right direction, the improvements in the rushing attack should really help the offense moving forward. Do you think the Steelers running game will continue to improve?

Lastly, I wanted to look at how the most targeted wide receivers have fared through the season with the following data points: 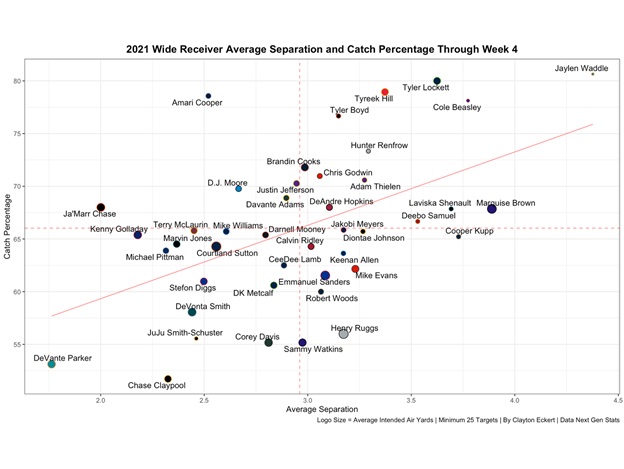 Diontae Johnson had a much better game in Week 4, continuing to create separation and improving his catch percentage. Wide receiver JuJu Smith-Schuster had the two miscues with Roethlisberger, which brought his average catch percentage down to the bottom ranks in the league, and wide receiver Chase Claypool remains the lowest ranked player in completion percentage after not suiting up against the Packers. This highlights the biggest trend I’d like to monitor in the next few weeks in the passing game. Many factors will go into this such as play calling, Roethlisberger’s quality of play and connection with the receivers, and if the running game can continue to progress which in turn will hopefully open up the pass game.

Do you think the coaching staff will make adjustments in the play calling and situational football to hopefully put the players in better situations? How do you see Roethlisberger’s connection with the wide receivers playing out the next two weeks? What about the running game?