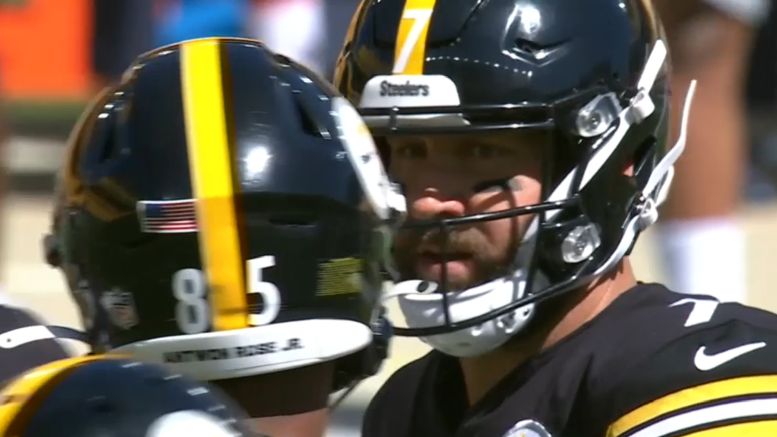 Entering the week, Pittsburgh Steelers quarterback Ben Roethlisberger ranks sixth in the NFL in pass attempts per game, having attempted just over 39 pass on average through the first six games of the season. He averages 25.5 completions per game.

Yet that is still not enough to have everybody feel like they’re contributing at a satisfactory level. Of course, that may have something to do with wide receivers Diontae Johnson and Chase Claypool averaging 10 and 8.4 targets per game, respectively, taking up nearly half of the opportunities.

One player who has definitely not had the opportunities that he has been used to in the past is eighth-year tight end Eric Ebron, in his second season with the Steelers. A Pro Bowler in 2018 who caught 66 passes that year on 110 targets, he has just 13 targets so far in 2020 with seven receptions.

Asked about Ebron’s workload, quarterback Ben Roethlisberger said on Wednesday, “I don’t know that anybody’s catching the amount of balls they want to. The stats aren’t there for anybody. But at the end of the day, winning is the stat that matters the most. I think you can see that from him too”.

For his part, Ebron has been trying to be the team player, which even he admitted he may not have always been to the best of his abilities in the past, during his stints with the Detroit Lions and the Indianapolis Colts, when things may not have been going his way.

“You just hope that what you put on tape, people see, and I’ve been putting a lot of good stuff on tape, and you just hope that they recognize it”, he told reporters last week when he was asked if he has approached anybody about his opportunities. “There’s no need for me to say anything. My reputation is, I’ve always said something, so for me this time, I’m not gonna say anything and I’m just gonna continue to let my tape and my coaches work for me”.

When a reporter followed up by asking him if it has been difficult to be silent about it, he said, “it’s hard as fuck”, but he knows he’s not speaking only for himself, and he wants to be professional. I’ve got two kids and a wife, people that I lean on, that I talk to, so it’s not only about my image anymore and how I portray myself”.

He hasn’t in any way indicated through his play that he isn’t putting everything he has into trying to help the team win (cue the jokes about drops and blocking here, since we all know you’re going to make them). He simply wants to be asked to do more to help achieve those wins.

And at this point, we’re having reporters asking other players and coaches about the questions that they asked him earlier in the week, so he’s not responsible for that. Of course a player of his stature is going to want to get more touches. Antonio Brown wanted more touches when he was catching 100 passes a year.