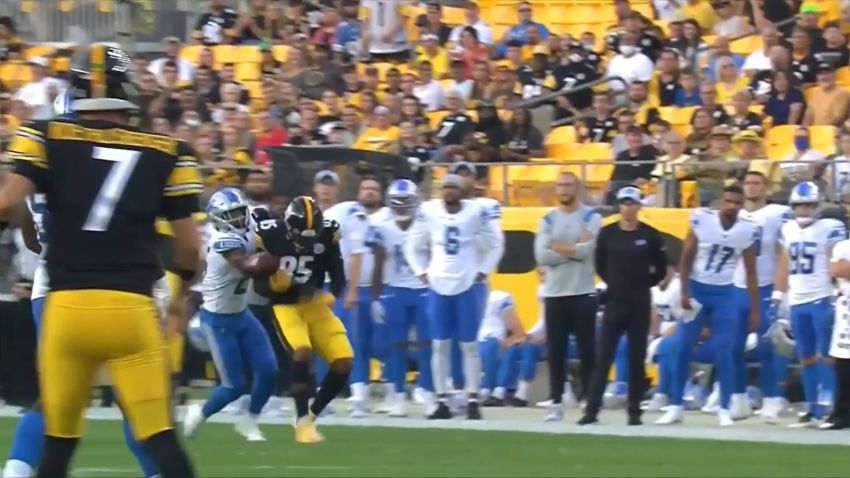 Tight end Eric Ebron has been a pretty high-volume player at his position almost since he first came into the league as a first-round pick. He was targeted 450 times in 83 games during his first six seasons prior to signing with the Pittsburgh Steelers last year, during which he saw another 91 targets in 15 games.

This year, he has only been targeted 13 times in the passing game through the Steelers’ first six contests, and has played fewer than half of the team’s offensive snaps as rookie tight end Pat Freiermuth, and even Zach Gentry, chip into those opportunities. Asked if he ever tries to campaign for more opportunities, he said that he is not taking that approach this time in Pittsburgh.

“You just hope that what you put on tape, people see, and I’ve been putting a lot of good stuff on tape, and you just hope that they recognize it”, he told reporters earlier today. “There’s no need for me to say anything. My reputation is, I’ve always said something, so for me this time, I’m not gonna say anything and I’m just gonna continue to let my tape and my coaches work for me”.

There are few topics about which Ebron doesn’t have something to say, or perhaps more accurately that he’s not willing to say. At least, that has been true in the past, but he has other considerations on his mind these days, even if he admits it’s a challenge. “It’s hard as f***”, he said, not to open his mouth sometimes about his opportunities in the offense.

“But I want to be a professional. I’m an adult. I’ve got two kids and a wife, people that I lean on, that I talk to, so it’s not only about my image anymore and how I portray myself”, he said. “It’s the way I think about the people that surround me. My job is to just come here and do what I’m asked to do, and I’ve been doing that to the best of my ability, and I think it’s showed. Just doing my thing”.

So far on the year, Ebron has caught seven passes for 47 yards, and he has a one-yard rushing touchdown. He has played 185 snaps, about 47 percent of the offensive total, after playing nearly 75 percent of the Steelers’ total offensive snaps last year alongside Vance McDonald. This year, however, he’s splitting time with Freiermuth, who has already played 201 snaps, and Gentry, who is right up around 100.

The tight end group as a whole is hopeful that, as they get into the second half of the season, they will take on more responsibilities in the passing game following wide receiver JuJu Smith-Schuster’s injury. The Steelers did play more out of 12 personnel in their one game played so far since then. Sunday’s divisional showdown will be the first real indicator.