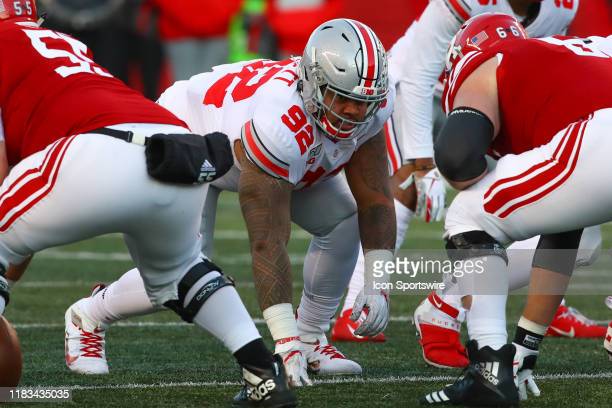 While the Pittsburgh Steelers defense hasn’t been the hot topic of conversation the offense has been due to their inability to move the football consistently, that shouldn’t mean that this unit shouldn’t be held under the microscope as well. GM Kevin Colbert did his best to add talent during the offseason, trading for the likes of LB Joe Schobert and CB Ahkello Witherspoon while signing EDGE Melvin Ingram and DB Arthur Maulet via FA. The team also added DB Tre Norwood in the draft, hoping that these respective moves would make up for the loses they had to free agency this offseason.

While the defense has held its own so far in 2021, it isn’t the same impactful unit it was a year ago. They haven’t been able to force the turnovers they had a season ago and have been giving up more big plays in the passing game deep down the field. However, what has stood out this far in 2021 is the play upfront along the defensive line, most notably when DT Cam Heyward is off the field. Alex Kozora mentioned on the Terrible Podcast that Pittsburgh stifles the run with Heyward in the lineup, but when he is off the field, they are allowing well over five yards a carry.

This can probably be directed to the fact that Pittsburgh has been playing without NT Tyson Alualu since Week 2 when he fractured his ankle against the Las Vegas Raiders and that DE Stephon Tuitt hasn’t played yet this season after being placed on IR due to a knee injury suffered in the offseason. Alualu hopes to return in 2022 but will be 35-years old when the season starts if he does decide to return post injury. Heyward will be 33-years old next season and Tuitt has struggled with injuries his entire career, managing to have an 11-sack season last year but will be due nearly $14 million in 2022 with three void years tacked on after that.

This isn’t a statement that Pittsburgh should look to cut Tuitt to save $9 million next season, but rather to recognize that an end of an era is coming regarding the Steelers defensive line like what the offensive line experienced going into this season. Age, injury, and lack of production from the low investment draft selections the last few seasons along the defensive front suggest that it would be wise for Pittsburgh to not make the same mistake they made playing out their offensive line transition too long and look to retool the defensive front sooner rather than later. They have done this in the past, drafting Heyward in 2011 with the likes of Brett Keisel, Aaron Smith, and Casey Hampton on the roster.

Leal is arguably their most talented defender for the Aggies and boasts the frame of a traditional 4-i DL (6’4, 290lb). While he may look like a 4-I technique, Leal is extremely versatile as a defensive lineman, being able to line up outside of the tackle and come off of the edge as well as kick inside the guard and provide a rush from the interior. He can play with his hand in the dirt or stand up in a 2-point stance which is quite a feat of athleticism for a player of his size.

Leal has the strength to hold his own against the run as well as the athleticism to pursue the QB as a pass rusher. He has 4.5 sacks already on the year and will look to add to that total. Leal would likely require a high draft choice, but the payoff for a player of his caliber could be well worth the investment. If Pittsburgh were to draft Leal, he could easily come in Day One and spell either Heyward or Tuitt as well as be a chess piece to move up and down the defensive front. Here is a play from the orange Bowl last season showcasing Leal’s athletic ability against the Tar Heels.

Garrett is built more in the mold of Alualu, being stout and compact (6’2, 300lb). While he lacks ideal length and sheer mass to anchor the interior, Garrett has good play strength coupled with impressive lateral quickness and hand usage. He sheds blocks by guards and centers with regularity, being dangerous as a gap penetrator thanks to his low center of gravity and explosiveness. His motor is always running hot, whether it be against the run or pursuing the QB. He has great instincts and situational awareness, getting his hands up in passing lanes to knock down passes and has made several splash plays. Should Pittsburgh not be convinced Alualu will return to the same level next season, Garrett would be a logical replacement inside.

Georgia has established itself as one of the most dominant teams in the nation this season and has come on the back of some stellar play by the Dawgs defensive. One player that has jumped to the forefront of the national spotlight for Georgia is Jordan Davis. Davis is a mammoth of a man, standing at 6’6, 340lb with the size and strength to be a one-man wrecking crew on the interior. However, Davis is nimble on his feet for his size, being able to provide pressure as a pass rusher and play chase in the running game. Check out Davis’s quickness on display as a pass rusher against LSU facing #79 Lloyd Cushenberry III who currently plays for the Denver Broncos.

Davis is the literal definition of a dancing bear as Mike Mayock would like to say back when he worked with NFL Network. He naturally would be relegated to be a 0 or 1-technique because of his size, but his movement skills expand his potential usage to playing the 3-tech or potentially 4-i if asked to play in sub packages. Given the uncertainty of DL Tyson Alualu moving past 2021, Davis can step in next to Cam Heyward and Stephon Tuitt would create one of the biggest and most disruptive units in the game.

While it is nice to have big bodies along the defensive line that can push the pocket, the nature of the NFL game now calls for defensive linemen to be able to run in space and rush the QB to prevent being relegated to a part-time role. Ray fits the bill as an uber-athletic defensive lineman that can play multiple spots along the defensive front. The former five-star recruit didn’t see ample playing time right away for the Crimson Tide, but his traits stood out from the second he took the field. His run-and-chase ability for his size (6’5, 285lb) is borderline absurd as you can see here against Missouri after shedding the LG.

Ray came in talented, yet raw from a technical standpoint. The redshirt senior has since developed by leaps and bounds in terms of his hand usage and pad level, being stout against the run and a legit pass rusher that can play all three downs for a defense. He is older as a prospect but has the athletic upside and positional versatility to come in and contribute as a 4-i technique but widen out to the 5 or 7-tech as well as we see in this clip stacking and shedding the LT of South Carolina to make a play on the running back in the hole.

What are your thoughts on the current state of the Pittsburgh Steelers defensive line? Do you think they can get it together for the rest of the season and into 2022? Do you see the situation playing out in a similar way to that of the offensive line where a transition needs to be addressed now rather than later? What do you think of the names provided and their potential impact in Pittsburgh? Please leave your thoughts in the comments section below and thanks again for reading!