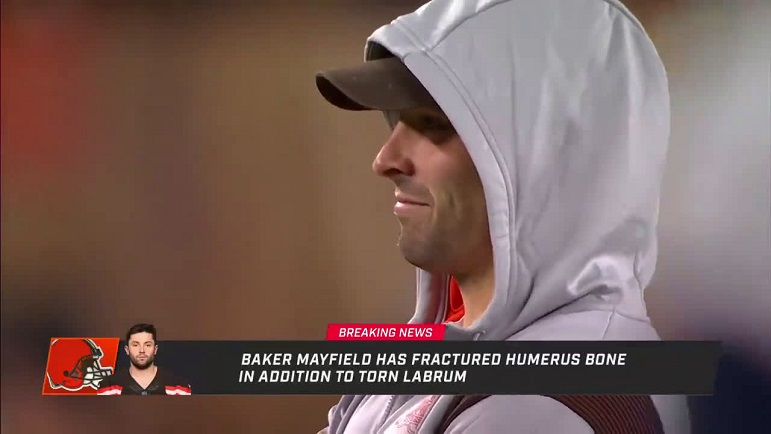 Is there a chance that the Pittsburgh Steelers will see quarterback Baker Mayfield on Sunday when they pay a visit to one of the many divisional rivals they’re currently staring up at, the Cleveland Browns? “Absolutely”, the fourth-year pro said, participating in practice on Wednesday while nursing a significant injury.

Mayfield suffered not only a torn labrum but also a fractured humerus early on in the season when he was attempting to tackle a defender who had intercepted one of his passes. He re-aggravated that injury a couple of weeks ago playing against the Arizona Cardinals.

He was forced to sit out the Browns’ last game, a Thursday affair a week ago, in which they were also without their top two running backs, and saw D’Ernest Johnson rush for 144 yards and a touchdown on 22 carries with Case Keenum at quarterback.

Asked of what the plan was for him in terms of practice and preparing for Sunday’s game, Mayfield told reporters, “I think similar to last week, see what I can do and take it day by day”, via Tom Withers of the AP. He insisted, “if it’s a situation where I would hurt the team if I was out there playing, I’m not going to do it”.

Mayfield is 116-for-173 passing so far on the season for 1474 yards. He has only tossed six touchdown passes, though he has also only been intercepted three times. On the other hand, he has also fumbled four times on top of that.

Keenum went 21-for-33 in relief of Mayfield last week, throwing for 199 yards with a touchdown, and did not turn the ball over. The 33-year-old is a very experienced veteran who is in his second season in the Browns’ system, and has 63 starts under his belt.

He relieved Mayfield in the first meeting against the Steelers last year, in fact, completing five of 10 passes for 46 yards. And he defeated Pittsburgh as the starter for the Denver Broncos during the 2018 season, completing 15 of 28 pass attempts for 197 yards and two touchdowns. But he lost to the Steelers with the Minnesota Vikings the year prior to that, 26-9. Still, if Mayfield can go, he will be out there.

“I’m completely confident in that”, Mayfield said of his ability to continue playing through the injury this year. “If you go out there, you’re scared, you’re timid, that’s how you really get hurt seriously, so I can’t do that. So like I said, trying to get the strength back and be able to go as close to 100% as possible, and if that’s not the case, then we trust the guys we have out there”.

He’s certainly not going to be near 100% this week. But the Steelers will probably be more concerned with Nick Chubb than either Mayfield or Keenum, anyway.