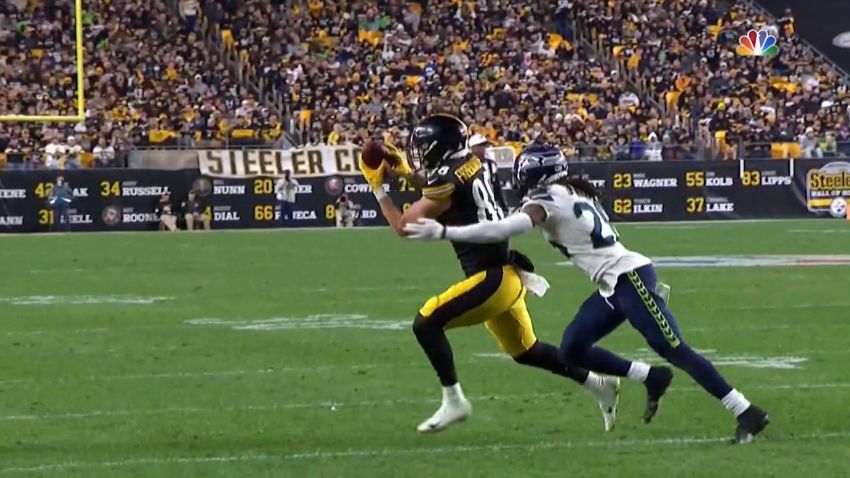 Reasoning: The rookie tight end saw career highs in targets, receptions, and receiving yards on Sunday in the Steelers’ victory over the Seattle Seahawks, in a possible sign of things to come.

While the Steelers are getting pretty good run out of all three of their tight ends on the 53-man roster, it is becoming increasingly clear who the true number one is, and that is rookie second-round draft pick Pat Freiermuth out of Penn State.

Named a co-starter with Eric Ebron when the regular season began, Freiermuth has already logged 200 snaps this season, seeing a career-high 45 on Sunday against the Seattle Seahawks. He also saw seven targets, catching all of them, for 58 yards. All of those numbers represent career highs.

This should only become increasingly common for an offense that is looking to replace wide receiver JuJu Smith-Schuster, their consistent slot presence for the past four and a half seasons. We saw an uptick in the usage of 12 personnel, which will help all of the tight ends get on the field more.

But they will need to be, because they’ll be called upon to help replace the key targets that Smith-Schuster leaves behind him. Freiermuth is probably the player closest to Smith-Schuster on this offense, if you really think about it, though of course he doesn’t have the wide receiver’s athleticism and isn’t about to win one-on-one matchups on the outside against cornerbacks.

To date, Freiermuth has caught 18 passes on 20 targets for 158 yards. He does have one touchdown, but I suspect they will be looking for him in the red zone more and more as the season progresses. He has also contributed positively as a blocker, though right now Zach Gentry is their top blocking tight end (imagine saying that two years ago).

Unfortunately, only four of Freiermuth’s seven receptions were ‘successful’ on Sunday, which included two receptions on third and long, on which he was targeted short of the chains without a very realistic shot of picking up the first down. But that’s what Ben Roethlisberger’s gotten used to doing with Smith-Schuster.