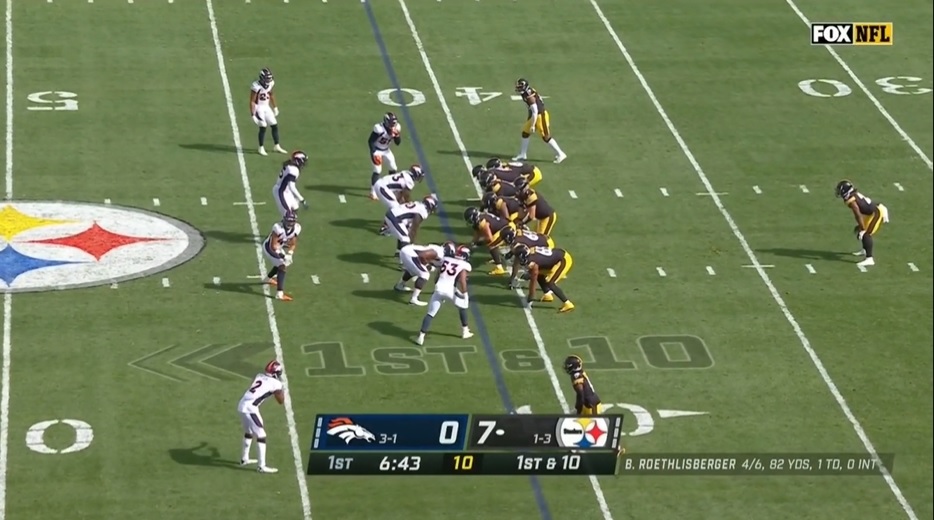 For the first time all season, the Pittsburgh Steelers’ run game came alive in Sunday’s win over the Denver Broncos. Signs of improvement showed in Week 4’s loss to Green Bay but start to finish, the Steelers’ run game took charge in Sunday’s win, Najee Harris running for 122 yards and the team totaling 147. Beyond that, the offense felt efficient, on track, like they had a plan they had the luxury of sticking to.

So what made the difference? First down success. Add up all the numbers and they aren’t as gaudy as you might think. But they were a big change, for the better, than where they were at before.

Against Denver, Pittsburgh ran the ball 19 times on first down. They totaled 57 yards, an average of exactly three yards per carry. Only seven of those runs (36.8%) were considered successful, gaining four yards or more. But dig deeper and the numbers are still an improvement. The biggest thing Pittsburgh did well was avoiding negativity and getting something on 1st and 10. Only two of those plays resulted in negative yards (10.5%) and 12 of the 19 resulted in a gain of at least three yards (63.1%).

Here’s how those numbers stack up from the first four weeks of the season.

On paper, some of those numbers look the same (the success rates are identical) and Pittsburgh’s YPC is actually higher over the first month than against the Broncos. But Pittsburgh did a noticeably better job avoiding losses and getting at least a couple yards to get into say, 2nd and 7.

Now let’s turn on the tape. We’ll go more in-depth with it throughout the week when we get the All-22 but the push Pittsburgh’s line got was notable from the initial first down of the game.

First run, first play of the game. Steelers inside zone/duo (hard to tell from his angle) run with an insert block from WR JuJu Smith-Schuster, a common run concept the team used Sunday (paired with a bubble RPO to the top). O-line wins the point of attack here with key blocks up front by LT Dan Moore and TE Zach Gentry. Harris isn’t touched until he’s 3-4 yards past the line of scrimmage. Look at this push upfront. 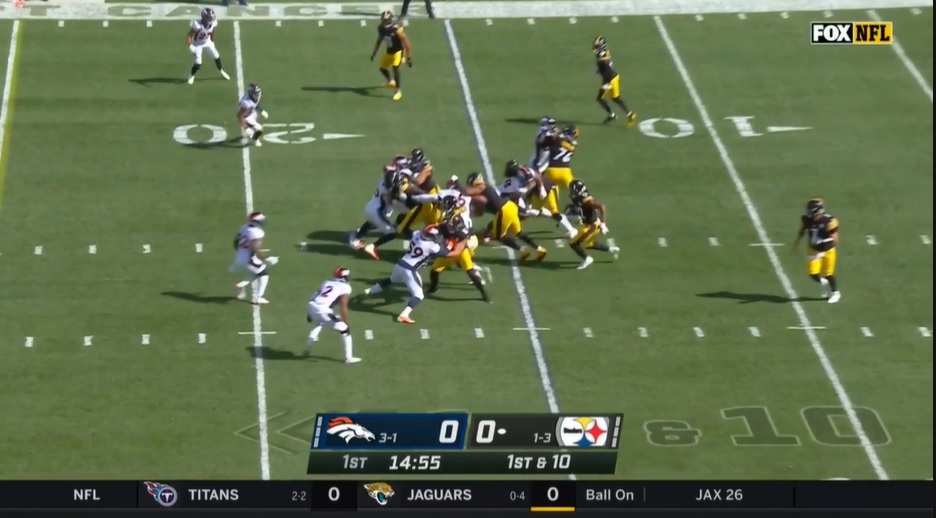 And he’s able to turn this into a six yard run. From 1st and 10 to 2nd and 4. Harris runs for three yards on second down, setting up 3rd and 1 that Pittsburgh converts.

Next drive. After running a jet play to JuJu Smith-Schuster earlier in the game, they use the motion as window dressing to move the eyes/widen the linebackers and hand off to Harris on the inside. Good blocks up front by Gentry and RT Chukwuma Okorafor and Harris barrels ahead for another six yard gain. It’s another 2nd and 4 and Harris runs for five yards to pick up the first down. 2nd and medium allowing this team the freedom to run again and move the sticks.

1st and 10, first play of the second quarter. Another WR insert block. Moore helps clear the way while Kevin Dotson seals off the defender to open a lane for Harris, who takes a second to identify the hole but gets upfield and falls forward for a gain of five. Nice cut and finish on the run. That makes for a 2nd and 5 and Harris rips off a 20-yard run the very next play.

1st and 10 on the Steelers’ 14. Counter Trey with LG Kevin Dotson and TE Pat Freiermuth pulling. This run is more on Harris. Not much initial running room but Harris flashes the power and finish to drive and move the pile, getting about three yards after contact and turn a potential two-yard run into a successful five-yard gain.

Harris doing it on his own here. Bounces this designed inside run to the outside and gets 1v1 on the DB. Harris sticks his foot in the ground, plants and explodes upfield, getting vertical and plowing ahead for eight yards. 1st and 10 turns into 2nd and 2. Steelers take a deep shot on second down, dropped by Cody White, but they come back to hit Pat Freiermuth on third down for three yards. First down run meant the second down incompletion wasn’t a death sentence and still had a fighting chance on third down.

On Sunday, no first down run gained more than eight yards. They didn’t hit the home run play. But they got into 2nd and manageable so they could keep running the ball then. That’s when Harris reeled off some of his longest runs of the game.

Move forward on first down and you stay on your script and schedule. It’s not even so much as the playbook being wide open as it is running what you wanted and planned to do. Which usually offers your offense a good deal of variety. That was huge for Pittsburgh and a job well done by this group, offensive line, tight end, wide receivers, and running back.