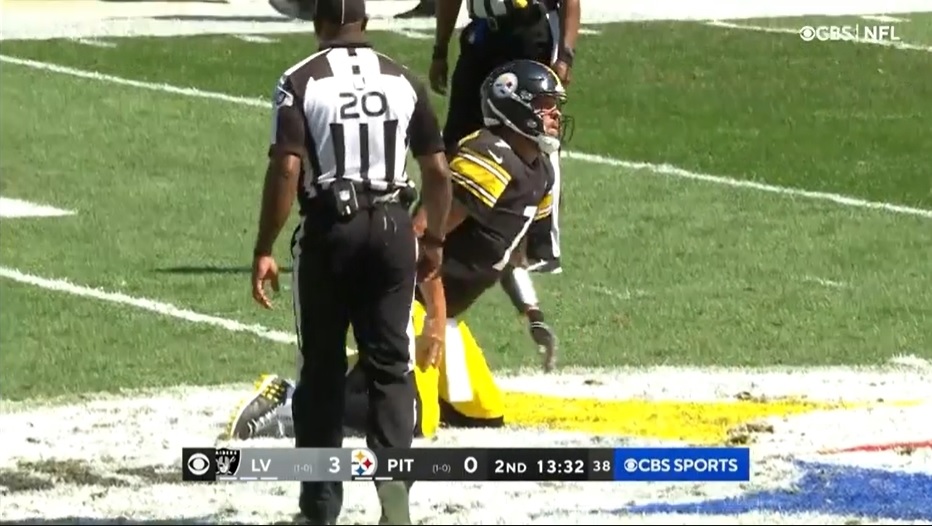 This new and largely young offensive line is figuring a lot of things out. And while it’s not the most pressing issue, there’s one coaching point that can’t lapse again. When your QB gets hit, help him up.

Sunday, the front five failed to do so early in the second quarter on a fourth down incompletion. Roethlisberger was crushed by Maxx Crosby and others as the offensive line fell apart. Ugly as that was, not a single teammate came over to check on their quarterback or offer to help him up.

Here’s an admittedly tough to see look of things from the All-22 angle.

We weren’t the only ones to notice. So did Zach Banner, who appearing on 93.7 The Fan with Andrew Fillipponi and Chris Mueller, said that message was quickly relayed to the starters.

“There were words said after that when they came back to the sideline,” Banner told the show. “And then they were reiterated in the film room. That’s not acceptable. Bottom line.”

A forgivable lapse by the Steelers’ starters, especially knowing how young this group is. It’s a team trying to find leadership up front after Maurkice Pouncey’s retirement along the Alejandro Villanueva and David DeCastro’s departures. In past years, everyone knew who the leaders were. This year, the team is trying to figure that out, even a veteran like Trai Turner, knowing he’s a new face to this group.

But certainly not a lapse that can occur twice. Pittsburgh’s line is a work in progress, that much is obvious two games in, and they’re going to make mistakes in the future. But these kinds of things are entirely within their control.

Banner promised fans this issue has been resolved.

“It will not ever happen again. I promise you that.”

In the past, it was Pouncey who served as Roethlisberger’s right hand man. Those two protected and checked on each other. When Pouncey was down, Roethlisberger helped him up.

Know it seems really minor but always appreciative of relationship Ben and OL have. Especially Pouncey. 7 jogs over to help him up. pic.twitter.com/XCUwZnDdo4

And when Roethlisberger went down, Pouncey was there to back him up, even if that meant getting into someone’s grill.

Those are the unwritten rules of the game, just as is Ben’s “rule” to celebrate with teammates when they find the end zone. In this clip, you can hear Roethlisberger tell Turner, “when we score a touchdown, you give me some love” in his mic’d up segment in a preseason game against the Detroit Lions.

Obviously, the goal is to not make it a moot point. To avoid Roethlisberger getting pummeled the way he did on Sunday. That hit by Crosby was especially crushing and an illegal hit to the head missed by the officials. But when Roethlisberger does get hit – and it’ll happen again – this is a group that needs to be there for its quarterback. Like most everything else, this front five is learning that too.