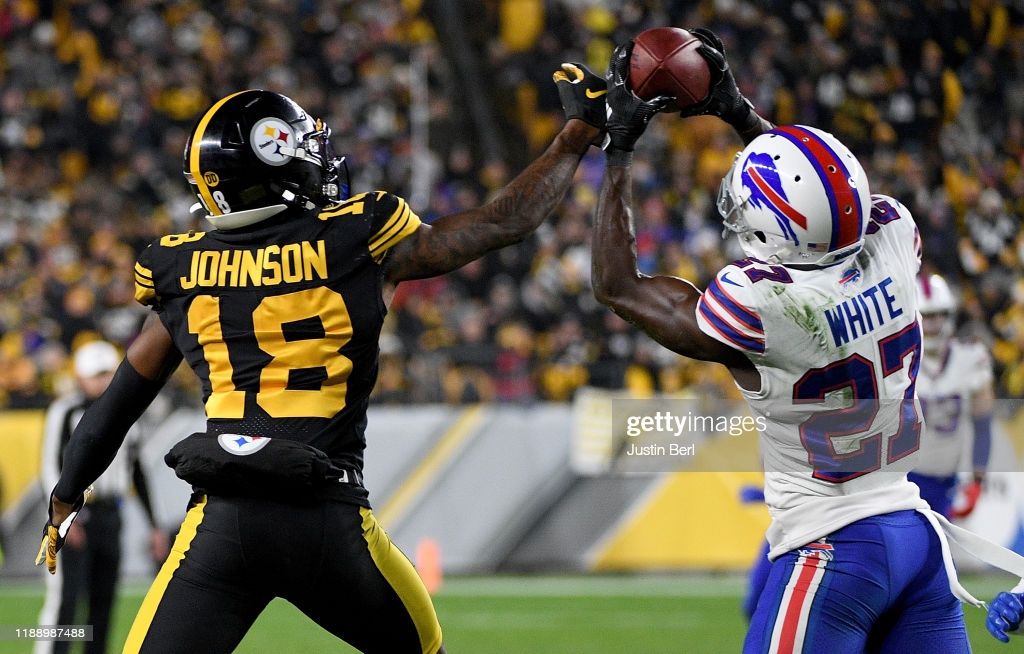 After a lengthy offseason, which saw the Pittsburgh Steelers revamp their roster following the departure of multiple veteran leaders, the season is finally set to begin this Sunday at 1 PM for the teams matchup against the Buffalo Bills at Orchard Park. In their Week 14 matchup late in the 2020 season, the Bills secondary did a solid job in disrupting the Steelers receivers, holding Ben Roethlisberger to a stat line of 21/37, 187 yards, two touchdowns, two interceptions, for an average of 5.1 yards per attempt and a passer rating of just 65.9.

Entering 2021, the Bills certainly field a talented secondary once again, headlined by a perennial All-Pro cornerback on the boundary in Tre’Davious White, and accompanied by two stalwart safeties in Jordan Poyer and Micah Hyde. Rounding out the secondary, Levi Wallace has proven to be a playmaker at the field corner position, with Taron Johnson, who played a big role in the Bills Week 14 victory, coming off a breakout season in the slot.

Although the Bills inarguably field one of the premier secondaries across the league and rendered Pittsburgh’s passing game lifeless in their prior Week 14 matchup, weaknesses revealed themselves at times. Today, we will be taking a deep dive into last year’s Week 14 tape, focusing on how the Bills defensive backs have achieved success in recent matchups, and likewise, how the Steelers receiving core can use their tendencies to produce in the passing game this upcoming Sunday.

Chase Claypool, the teams top draft selection in 2020, burst onto the scene as a rookie, overpowering defenders with a unique combination of size and speed, and ultimately compiling 62 receptions for 873 yards and 11 total touchdowns. One area however where Claypool struggled at times was his ability to gain separation off the line of scrimmage against press coverage, leaving him unprepared for the physicality of All-Pro boundary cornerback Tre’Davious White.

Given that the Bills rely heavily on White’s ability to work out of isolated man coverage matchups on the boundary, allowing them to roll zone coverages toward the field, the Steelers wide receivers will need to produce from the “X” position for the passing game to succeed. As with most great cornerbacks, Tre White has a large toolbox to play with in his press man coverage, showing the kick slide, off hand jam, soft shoe press, and even occasionally a jump jam, as we see here below.

Operating out of a man coverage assignment to the boundary, White observes that Chase Claypool’s eyes are locked in the backfield, immediately shifting all his weight onto his back foot, and exploding through Claypool’s chest with a two hand jam at the snap. As Chase Claypool never gets into his route, Ben Roethlisberger is left with a half field read, throwing a curl which would ultimately be broken up by Levi Wallace, who had been keying the sticks on third down.

While it may appear that White is playing overly aggressive with the jump jam here, given that Claypool’s eyes are locked in the backfield until the snap, White was correctly deploying the aggressive technique given the receivers lack of pre snap awareness. To the field, Levi Wallace does a phenomenal job of keying both down and distance, as well as Diontae Johnson’s aligning outside of the numbers, to trigger and break up the short curl route near the first down markers.

If the Steelers want to get aggressive and break their tendencies of 2020, an early third down double move to the field could certainly generate downfield separation on the aggressive Levi Wallace. Moreover, whoever takes reps at the X position throughout the game must be ready to combat Tre White’s quickness and physicality at the line of scrimmage to create enough separation with their releases.

Cut splits are a great way to generate favorable leverage matchups against boundary cornerbacks, making it tough for them to align in press man coverage. While Tre White is more than capable in both press and off man coverage alignments, aligning the “X” receiver in a cut split to the boundary often forces the talented corner to align at seven yards depth, creating space for “access routes” to the sideline. On the rep below, Juju aligns in a cut split, stemming outside with his release before breaking toward the sideline for an easy completion. While the team always must be wary of Tre White’s ability to break out of off coverage, cut split bunch, a staple of Matt Canada’s offense, should serve as a great gameplan to create easy completions to the flats.

While Josh Norman is no longer on the team after signing with the San Francisco 49ers this offseason, the rep below highlights how the Steelers receivers must compete downfield in opportunities against the Bills Cover 1 scheme. After diagnosing the cornerback in a press bail technique, Roethlisberger smartly throws a high arching ball, giving the large framed Chase Claypool an opportunity to box out and attack the ball at its apex, before the safety arrives from the post. While it is by no means a routine catch, Chase Claypool, along with the rest of the Steelers receiving core, will need to punish the Bills in single high, man coverage situations in order to compete on Sunday.

As I previously mentioned, Levi Wallace has steadily improved throughout his first two seasons in the league, and has capable instincts to play the football at the catch point. Nonetheless, similar to his collegiate tape, Wallace occasionally lacks consistency in his eye discipline and pad level, leaving him susceptible to sharp cuts downfield. Below, James Washington does a beautiful job on the “bang eight” post out of a cut split, stemming Wallace vertical to threaten his leverage, forcing the corner to open his hips toward the sideline, before cutting back violently to create separation up the seam.

While Wallace is more than capable at the field cornerback spot, the Steelers receiving core should be able to threaten his cushion and create separation downfield, particularly out of cut split alignments.

The most underrated member of the Bills secondary, Taron Johnson, is coming off a career year, with 94 tackles, five tackles for losses, three quarterback hits, a sack, a forced fumble, seven pass deflections, and the pick-six you see here below, as well as another in the playoffs. While more than capable in man coverage assignments, Johnson is at his best when operating out of shallow underneath zone assignments, such as the hook/curl zone we see him in here below.

At the snap, Johnson gains depth, patiently eying quarterback Ben Roethlisberger before planting and undercutting an out route intended for Juju Smith-Schuster, taking it back 51 yards for a touchdown which gave the Bills their first lead of the game just before halftime. When working quick game, Roethlisberger must be wary of Johnson’s presence, as he has proven to be an extremely instinctual player with advanced understanding of route distribution from his nickel cornerback spot.

Ultimately, with the Bills lacking the presence of Star Lotulelei, Sunday’s opener presents a perfect opener for the Steelers revamped offensive line to impose their will in the running game. That being said, if the Steelers plan on marching into Orchard Park and leaving with a win, the Steelers receiving core will need to help keep the offense on schedule and convert in downfield, contested catch opportunities.

The Bills secondary is a disciplined group, more than capable of capitalizing on opposing offense’s mistakes, presenting a great challenge for the Steelers talented receiving core to open the season. While beating one of the NFL’s most talented teams to open the season figures to be far from easy, creating splash plays in the passing game against the Bills aggressive secondary could be a deciding factor. Let me know who you think has the best chance to break the game open at receiver below!