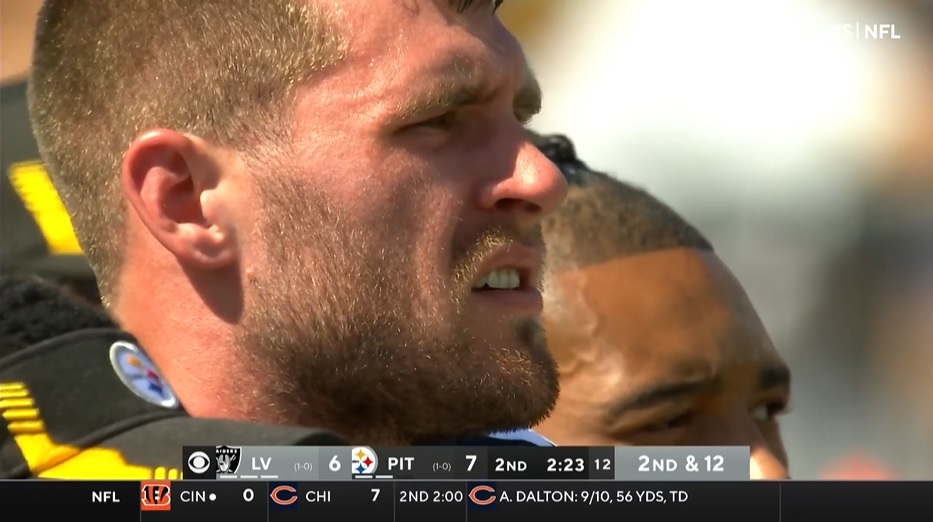 1. What is the End Game? – The offseason goal was to improve the run game. You drafted a running back in the first round.  Yet there is no effort to run the ball more and there is no effort to get your first round running back the ball more.  In four first half drives, no matter how long the drive was, Najee Harris only had 2 touches on each drive. So tell me, Steelers.  What is the end game? What do you want this offense to be? Do I believe what you said or what you do?

2. Decisions By Diontae – The talent here is undeniable and I think he could be a top 5 receiver in the league but something is missing. For at least the third time in two games he and the QB weren’t on the same page. Can’t have that happen.  He gave up on a play leading to an interception. Doesn’t mean he would have prevented it but it didn’t look good.  Makes a nice catch on a deep ball and casually runs out of bounds instead of trying to tip toe along the sideline and get more. That “want to be great” gene doesn’t seem to be there and just being good seems to be enough for him.

3. Jet by JuJu – Sounds like cologne, right? Anyway, last season all the jet sweeps inside the five were to Claypool. After a couple times teams expected it.  Many players ran the motion but were never given the ball. In this game, I think they shifted from a 5 wide look into the tight formation and had the defense pointing at Harris.  Gave the defense something they hadn’t seen before and it ended up a score. I liked the call. Now don’t run it repeatedly. Run other things off the set up to confuse defenses.

4. Wrapping Up the Run – I will be looking forward to Josh Carney’s missed tackles report because I felt there were struggles across the board today but I seemed to notice it more on running plays. The overall rushing numbers weren’t high thanks to 6 tackles for a loss but there seemed to be too many extra yards allowed after contact past the line of scrimmage for the backup Raiders running backs today. Late in the game you can probably understand some due to depth caused by injuries and fatigue issues but when they needed a stop they couldn’t get it.

5. More Dunks, Less Dives by the ‘Pool – Nine targets and three receptions. That is what Chase Claypool finished with.  He had several chances on deep balls and looked like he had a chance on several of them. To me, Claypool is diving forward at a 45 degree angle rather than going straight up for the ball.  This is negating the height advantage he has against most defensive backs and giving them a better chance to defend the ball. Would like to see him more vertical and less horizontal on contested catches.

6. He Who Hesitates is Lost – It was a small thing and may not have changed the play. On the deep touchdown to Henry Ruggs, Tre Norwood jammed a receiver before coming on a blitz. He had a free lane to the quarterback and he hesitated while rushing for just a moment and that may have been enough time for Derek Carr to get the throw off. Maybe he hesitated because he though Carr might run outside but I’d love to find out what he was thinking. Game of inches, Man.

7. Special Kind of Love – A quick shout out for special teamers that had good days. Ray-Ray McCloud finished with 113 total return yards and on unsportsmanlike penalty for pointing at a player, I guess. The very first kickoff was a smart play by him. It looked like the plan was to set up a return to the right. If he tried to get there he probably would have been tackled inside the fifteen but instead went up the left sideline and had a good return. Chris Boswell set a Heinz Field record with a 56 yard field goal. Pressley Harvin III averaged 49.3 with three inside the 20 and one inside the five.

8. They Can Snell What You’re Cooking – Benny Snell got a couple of touches today after no running backs other than Harris got any last week. Both plays were running plays on first and ten.  I think both plays were 12 personnel, but I could be wrong there. Roethlisberger may have gotten to the line and said, “We’re running it” as well. I can’t confirm that though.  I was expecting a run, you were expecting a run and the Raiders were expecting a run.  Mix in a play action with Snell in there please. I bet it helps.

9. Need for Speed: Most Wanted – The NFL is full of fast players. Does the Steelers offense have any speed players besides the injured Anthony McFarland? Johnson is the route runner. Smith-Schuster the physical slot guy. Claypool the deep threat.  Harris is the vision/agility/yards after contact runner. There isn’t really any dynamic player that when he touches the ball that makes you think he has the quickness to make someone miss and jets to take it the distance.

10. Right Where I Expected – So after two weeks the team is 1-1. I thought the results of the first two games would be flip-flopped but it’s still the same. I expected 4 weeks of the offense and Matt Canada finding their groove. The defense was great last week and had some struggles this week with injuries having an impact. I hope Johnson wasn’t seriously injured on a play where they should have taken a knee. The offensive line needs to gel and the defense needs to get injured players back but I’m feeling pretty optimistic. How do you feel?