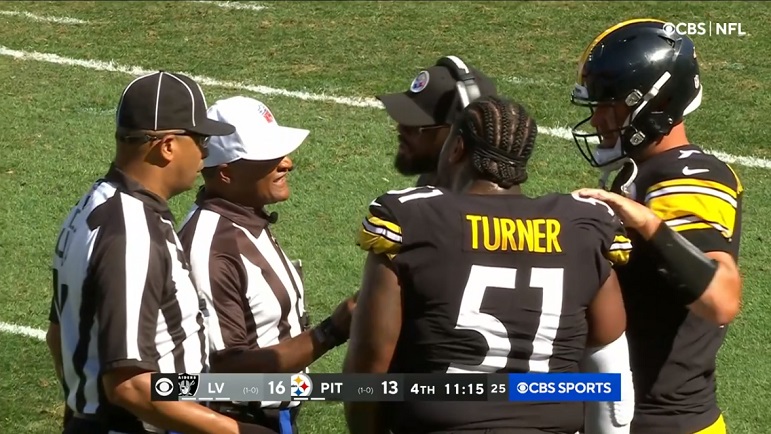 We’ll find out sometime this week if Pittsburgh Steelers guard Trai Turner will face additional punishment from the NFL for his spitting incident in the second half of Sundays home loss to the Las Vegas Raiders. In the meantime, however, Steelers head coach Mike Tomlin has seemingly already moved past Turner being disqualified from the team’s Week 2 game for allegedly spitting on Raiders linebacker Marquel Lee.

On Tuesday, Tomlin was asked during his weekly press conference if he has since talked to Turner about how the veteran guard reacted on Sunday, which included him apparently retaliating for being spit on by a Raiders player, which was presumably Lee.

“I didn’t,” Tomlin said. “Much like I mentioned after the game, Trey is no kid. He’s very cerebral, largely, and he understands what that circumstance did to us collectively as a team. He was more than apologetic. It required no meeting.”

On Monday, it was reported that Turner isn’t likely to be suspended for any games by the NFL for his Sunday actions. Turner, however, will likely be fined this week. That seems like a forgone conclusion at this point.

The television version of Sunday’s game seemingly shows Turner spitting on Lee. It does not show, however, Turner being spit on by a Raiders player and the same goes for the all-22 tape of the game.

Turner thanked Tomlin on Twitter after Sunday’s game for the comments the Steelers head coach made during his postgame press conference about the spitting incident.

“Somebody spit in his face,” Tomlin said after the game. “And so, I understand the 15-yard penalties and so forth, gaining control of the game and stuff. Trai is not a young guy, he’s not overly emotional; he’s a flat-liner. For him to respond the way that he responded, what transpired had to transpire. I was stating that case to them. I didn’t believe he did enough to be kicked out of the football game. That was just my opinion.”

Barring something really unexpected at this point, Turner will be the Steelers starting right guard again on Sunday when the team host the Cincinnati Bengals at Heinz Field. It will now also be interesting to see if Turner talk to the media this week. If that happens, it will likely happen on Wednesday or Thursday and by then Turner should know what his fine from the league is.