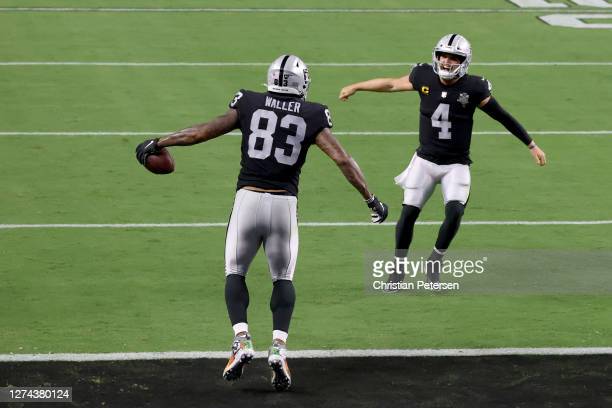 Fresh off their wacky Monday night win over the Baltimore Ravens, the Las Vegas Raiders will come to Heinz Field this Sunday for Pittsburgh’s home opener of the season. They’re bringing a group of 53. But one man stands above the rest. Almost literally. Tall, athletic tight end Darren Waller, who is sure to be Derek Carr’s favorite weapon this weekend.

Last night, Waller caught ten passes for 105 yards and one touchdown on an almost-hard-to-believe 19 targets. Talking with reporters during his Tuesday press conference, Tomlin knows Waller is a tight end in name only.

“You can describe him as a tight end, but I think that seems less than appropriate to be honest with you,” Tomlin said during his weekly presser. “That’s putting them in a box. This guy is a dynamic big athlete. I’m watching the game last night and, and looking at his I’m looking at his measurables man. He’s more similar to Claypool than the years, any tight end that we have on our roster in terms of measurables and fluidity of movement and body control.”

Baltimore drafted Waller in the sixth round in 2015 but he never stuck, struggling to find his footing while dealing with substance abuse issues. Twice, he was suspended by the league, the latter for an entire season.

But he cleaned up and joined the Raiders in November of 2018. They converted him to tight end and his career took off. In 2019, he broke out for 90 receptions, over 1,100 yards, and three touchdowns. He found paydirt a lot more last season, nine times, and built upon his numbers. He may be the most dynamic tight end in the league. Or at least, right up there with the likes of Travis Kelce.

“We better respect them in that vein. I think people that are unfamiliar with those guys and try to treat them like a tight end and maybe cover them the way you would cover normal tight ends. You really set yourself up for a long evening.”

The Ravens felt that long evening turn into a long night. Waller’s 19 targets were the most by a tight end since Aaron Hernandez had 19 in a 2012 game with the Patriots. For Waller, those 19 looks were a career-high but they’re not far off from the norm either. Last season, he recorded seven games with double-digit targets and twice, had more than 15.

Identifying the problem is the first step. But it’s the easiest one. Solving it is a whole different story. Tomlin knows it’ll take more than one man to get the job done.

“Options are good. Not only in terms of changing people up but number of people. You better be prepared to deal with 19 targets.”

Pittsburgh had a rotating cast of defensive backs last week, as we wrote about this morning. Minkah Fitzpatrick played extensive snaps in the slot and could do so again this weekend. But as Tomlin hinted at, and as they’ve done in the past to weapons like Bengals’ WR Tyler Boyd or last week against Bills’ WR Stefon Diggs, bracketing and doubling Waller is a smart approach in crucial situations.