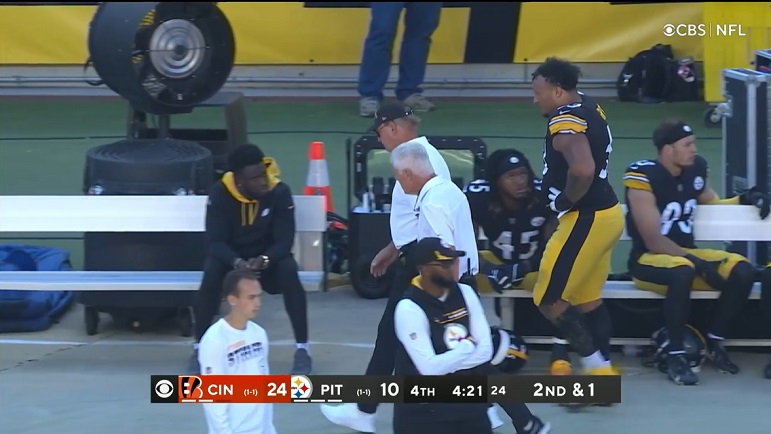 It looks like Pittsburgh Steelers rookie offensive lineman Kendrick Green got lucky this week and avoided a serious injury after exiting the game near the end of the 4th Q of the Week 3 loss to the Cincinnati Bengals although initially that didn’t seem to be the case.  With the Steelers moving down the field and working to close the 24-10 deficit, QB Ben Roethlisberger hit RB Najee Harris for a 9-yard pick-up to the Cincinnati 14-yard line.  Following the play, Green was seen down and appeared to be in significant pain.  He was able to walk off the field on his own and headed to the locker room.  He didn’t return to the game.

The Steelers center was reportedly limping during the second half of the game, but it is unclear when he was injured or what the actual injury was. I rewatched the entire game on All-22 with attention to Green on every offensive snap and reviewed the series where Green went down on the TV broadcast as well (the things I do for yinz!) and I never saw a definite mechanism of injury.  It may have been late in the 3rd Q following a Bengals punt and a Steelers penalty that had Pittsburgh starting near their own 4-yard line on a 1st and 10.  RB Najee Harris rushed up the middle for two yards and Green was one of several offensive and defensive linemen that got tangled in a pile.

Following the game, Head Coach Mike Tomlin included Green on the list of injured players as a “knee”.  He gave no further elaboration two days later during his weekly press conference when he described Green’s issue as merely “bumps and bruises associated with play” and stated he did not expect Green to be limited in practice this week leading up to the trip to Green Bay for a Week 4 matchup against the Packers.

So, what was Kendrick Green’s injury?  The day after the game ESPN’s Brooke Pryor tweeted that Green had a bone bruise, per her source:

This diagnosis was never confirmed by any other NFL insiders.  Also of note is that Steelers Director of Communications, Burt Lauten, who tweets during the game with player injury updates and potential to return, never mentioned Green.  It’s possible this was only because it was so close to the end of the game.

So, what is a bone bruise you ask?  I’ve written about this particular injury a few times over the years: RB Le’Veon Bell, WR JuJu Smith-Schuster, and LG Ramon Foster, not to mention Ben Roethlisberger, who sustained a bone bruise in conjunction with an MCL sprain.  All of them missed time due to this injury, ranging from 2-5 weeks.

Here is a quick refresher on the types of bone bruises (courtesy of www.md-health.com): 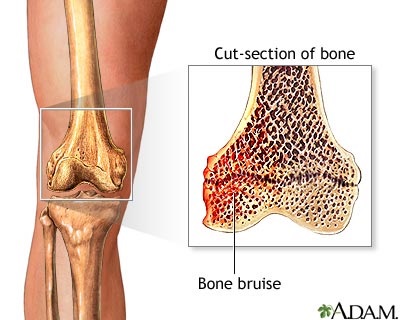 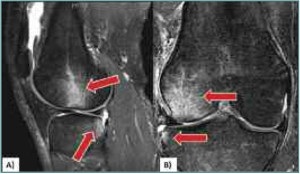 Bone bruises can be extremely painful.  The Journal of Orthopedic & Spine Trauma published a study in 2017 looking at which variables correlate to the intensity of pain experienced with a bone bruise.  They found that the severity of acute bone edema (swelling from fluid) had the highest effect on pain.  The location of the bone bruise did not correlate with severity of pain either.

The initial treatment for a bone bruise is the typical RICE plan (rest, ice, compression, and elevation).  As the swelling and pain decrease, the initial therapy will focus on keeping the joint loose, most likely with a stationary bike.  As mobility improves, the next step is strengthening exercises.

A high percentage of bone bruises are found in players who sustain ACL or MCL injuries and in those cases (like with Big Ben) it’s the ligament injury that determines the recovery time.

Typical recovery time for an isolated bone bruise (i.e., no ligament damage) is 4-8 weeks and it’s not just about resolution of the pain and swelling.  Returning to play too soon could result in loss of cartilage in the joint, leading to long term complications like arthritis.  I’ve always loved this description of the healing process from Dr. David Chao (@ProFootballDoc):

Think of the bones of the knee being covered by articular cartilage like the dirt of the football field has grass on top. When an elephant stomps on the grass, the dirt underneath can be damaged/compressed. In order to allow the grass (articular cartilage) the best chance to rejuvenate and heal, you can’t keep playing football on it. The “keep off the grass” sign allows a chance to heal.

Where NFL players are concerned, the timing of recovery certainly seems to be situational as well.  Back in 2014 Bell missed the Wildcard round playoff game the week after his injury.  Bell said that he could have played the following week had the Steelers advanced to the Divisional round, and that’s probably true but he certainly would not have been 100%.  Unfortunately, the Steelers didn’t get a chance to find out.  When JuJu Smith-Schuster sustained a bone bruise in his rookie preseason, he only missed 1 game, returning for the 3rd preseason matchup, and he never skipped a beat.  The following year, Ramon Foster also sustained his injury at training camp in late July.  He skipped all four preseason games but returned to practice a month later and was ready for the regular season opener.  Big Ben was back after 5 weeks but that might have had more to do with his MCL sprain than the bone bruise.

Skill position players clearly have different physical demands than linemen, and the same injury may require a different recovery time based on position.  In the 2012 season, Seahawks OT Russell Okung suffered a bone bruise in his left knee and missed one game.  Quinton Spain, Titans LG, was carted off the field with a bone bruise to his right knee and missed 4 weeks…returning to a 40-17 loss to Pittsburgh at Heinz Field.  That was a fun game, with Ben throwing 4 TDs and the Steelers defense catching 4 passes from Marcus Mariota.  But I’m getting off track here.

The bottom line is that nowhere could I find an example of a player returning from a bone bruise of the knee in a mere 3 days…which tells me that it’s extremely unlikely that Kendrick Green did, in fact, sustain a significant knee injury given that he was a full participant in practice on Wednesday and wasn’t even listed on the injury report.  It’s more likely that he had a soft tissue (skin and underlying fat) bruise that didn’t involve the knee joint, and that type of injury is par for the course in the NFL.