Steelers Nation held its collective breath on Sunday, September 27, when Ben Roethlisberger went down and immediately grabbed his left knee.  According to one Steelers fan in attendance, the stadium in St. Louis was silent.  And for good reason — a serious knee injury like an ACL tear would mean the end of what was supposed to be Big Ben’s best season yet.

As everyone now knows, Ben limped off the field and was then carted off to the locker room.  Preliminary evaluation of the quarterback’s knee was not suggestive of an ACL tear, and a plain Xray did not show any fractures. So far, no too bad.

Later that evening, Jason La Canfora tweeted confirmation of the original estimate: Roethlisberger sustained a left medical collateral ligament (MCL) sprain but the ACL was intact. Most viewed this as a best case scenario. Several hours later, the injury was further clarified as a significant MCL injury with a bone bruise.

The question on everyone’s mind now is a simple one…when can Big Ben be back?

Like Matthew Berry in his Love/Hate, let me make all of the usual disclaimers: I am not Roethlisberger’s physician, I have not examined his knee or his MRI, and I have no reports from these evaluations. I am merely making an educated guess based on my experience as a surgeon and the information available.

SO WHAT IS AN MCL INJURY?

There are several ligaments that hold the knee joint together. The MCL runs vertically along the medial side of the knee joint, securing the femur (thigh bone) to the tibia (shin bone), the larger of the two bones between the knee and ankle: 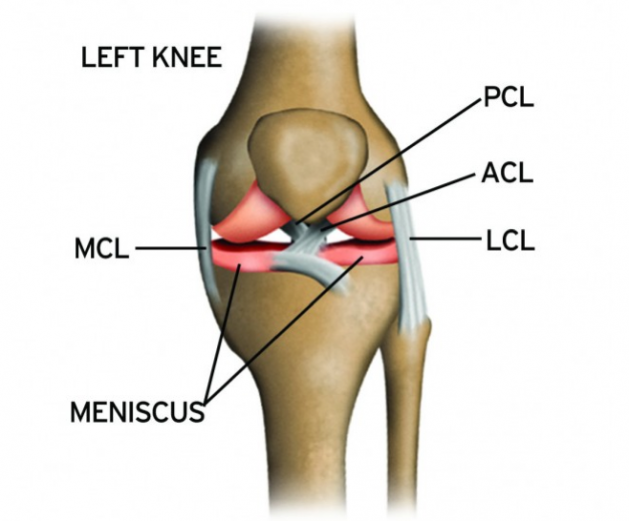 The MCL provides stability to the middle side of the knee, particularly when the knee is flexed.  A sprain is a stretch and/or tear of a ligament, and it is classified by severity. Here is the breakdown, courtesy of the American Academy of Orthopaedic Surgeons:

WHAT ABOUT THAT BONE BRUISE?

After the initial sigh of relief that the ACL was intact, Steelers fans had to start worrying again when Albert Breer tweeted an update from the MRI report:

More specifics on Steelers QB Ben Roethlisberger's injury: It's a Grade 2 MCL sprain. And he's got the bone bruise.

A bone bruise doesn’t sound so bad, right? Well, it can be more than just a bruise. I wrote about this last year when Le’Veon Bell sustained the knee injury that wound up ending his season.

From www.md-health.com, here is the run-down of bone bruise types:

Depending on the area of bone involvement, there are three kinds of bone bruises, which include a subperiosteal hematoma, an interosseous bruise, and a subchondral bruise.

For the moment, Ben needs to employ the basic RICE treatment: rest, ice, compression (with a brace), and elevation. Pain can be treated with anti-inflammatory medication like ibuprofen and possibly narcotics like Vicodin (please, Ben, no weed!).

As the pain and swelling improve and the ligament scars and heals, the quarterback can start to bear weight on his left leg and lose the crutches. He will then begin range of motion exercises (like an exercise bike, which allows the knee to bend but keeps it in line) and stretching to regain mobility.

Here is a rehab program for MCL injuries from Massachusetts General Hospital if you want to get into further detail:

Once his range of motion has improved, he can perform running drills and get back to doing what he does best…escaping the blitz and scoring TDs.

STOP WITH THE MEDICAL DETAILS!  WHEN WILL ROETHLISBERGER RETURN?!!!

By now, you’ve seen all of the media geniuses give their predictions of Ben returning to action in 4 to 6 weeks. Can it be sooner? Will it be longer? The obvious answer is that it’s way too soon to tell. But you wouldn’t be reading this if you didn’t want a good guess, so here we go.  How about a list of other players with MCL sprains and when they got back on the field:

*Stanton was hoping to return, but the Cardinals lost in the first round of the playoffs, ending his season

As far as the bone bruise goes, remember that Le’Veon Bell was hoping to return to action after 1 week if the Steelers made it past the Ravens in the playoffs last year. Later that month, however, he mentioned that, in retrospect, he would have had a hard time playing so soon.

All things considered, the estimate of 4 to 6 weeks sounds about right for a normal NFL player. But this is Roethlisberger we’re talking about. Back in 2012, he had that rare injury involving a dislocated rib. That injury likely caused excruciating pain and could have been life-threatening if the rib punctured his aorta. Despite that, Big Ben missed only 3 games, and on his return he didn’t have too bad a night for a guy in a Kevlar vest whose throwing motion probably hurt a heck of a lot more than planting on his left leg would today: 22 of 42 for 285 yards, 3 TD, 1 INT. And that was with Dwyer (8/32/0), Rainey (1/6/0), and Redman (2/0/0) as the running backs. Safe to say the run game is better this season.

So you won’t see him take the field against the Ravens this week, which is too bad because the Baltimore secondary and no Terrell Suggs would have made for a fun night. And even if Ben makes the trip west for the Monday night game at San Diego, Michael Vick will be under center. I am also guessing that Ben won’t be ready to go against a stout Cardinals defense that made the 49ers look like a high school team yesterday.

The obvious guess is that Pittsburgh will get their starting QB back when they face the Bengals, who lead the AFC North at 3-0, at home on November 1st. But I will not be terribly surprised to see Roethlisberger take the field against the Kansas City Chiefs in a month. And his team will need him –Arrowhead Stadium is a tough place for a visiting team, and the Chiefs have rarely allowed a rushing TD in the past 2 seasons. The Steelers will need an effective passing game to come away with a win there.

While I’m certainly not advocating that any athlete put himself at risk by playing with an unresolved injury, we all know that pain alone won’t keep Ben Roethlisberger out of the game. He’s a warrior who has been through much worse. Here’s hoping that he is up and about soon.