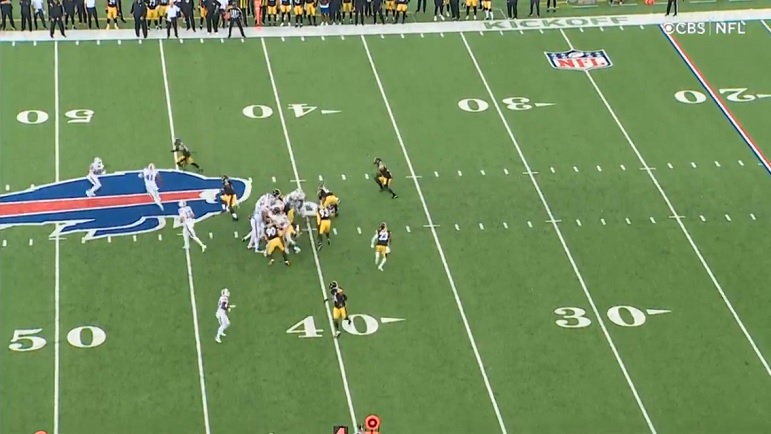 Pittsburgh Steelers cornerback Cameron Sutton had a strong game on Sunday in the team’s Week 1 road win against the Buffalo Bills, and that performance included him making a key stop on a fourth and one running play from the 41-yard-line with 13:46 left in the fourth quarter. Sutton tackled Bills running back Matt Breida for a loss of seven yards on that toss that included a fullback being in the game. After the game was over, Sutton talked about that key play he thwarted.

HUGE play here by Cam Sutton on the 4th down #Steelers pic.twitter.com/IIy71RmtJ8

“Yeah, obviously, fourth and one, fourth and short, some things obviously practice scenarios that we’ve seen obviously throughout the week,” Sutton said after the game when asked about that key fourth down stop. “That’s something that, not necessarily that play but kind of just getting a feel for the sense of the game. Obviously, they put some fullback belly on tape early in the year and obviously last year and over the years. And just kind of recognizing the play, you know what I mean? Trying to get a speed guy out in space, you know, why everybody’s crashed down in the middle. And I’m just able to read and react, get to him before he got started. And I just made a play.”

Sutton saying that the Bills put that fullback belly play down on tape earlier in the year means that he must have seen something during the preseason. As it turns out, a quick run through of the Bills’ All-22 tape from their preseason game against the Chicago Bears shows them using that formation and play type a few times. The Bills scored on both of those plays, with one of them being a fourth and one toss to running back Devin Singletary. The other touchdown out of that formation was a handoff to fullback Reggie Gilliam, and that play included a fake toss to the running back after the give.

Bills ran the same fullback belly toss in the preseason against the Bears and on 4th and 1 at that. #Steelers pic.twitter.com/SObhnVEME1

So, the differences between what the Bills ran during the preseason against the Bears and what they ran on Sunday against the Steelers? Well, for starters, against the Steelers, the Bills motioned the left wide receiver in tighter to the formation, and that brought Sutton closer to quarterback. The fullback also went left at the snap along with the running back. This play looks like it included some shenanigans in it, as in quarterback Josh Allen maybe pretending to a sneak up the middle. Even the fullback looks like he is playing along with the Allen fake of something and going half-speed.

As it turns out, the Bills may have gone way back to 2004 to revive the play they ran on Sunday on fourth and one against the Steelers. Look at the instance that was discovered below after the Sunday night game. That 2004, a pitch to running back Willis McGahee resulted in a 30-yard-touchdown.

That #Bills 4th down fake everyone hates?
I loved it. At least the call. Not so much the execution.

Because I was in Seattle for this gem back in 2004.
Guessing this is what the Bills were trying to do. pic.twitter.com/y8qWUxckuL

It really makes you wonder if the Bills would have been better served to run the same toss they did against the Bears and without the wide receiver motioning in. Had they done that and had the play fake went to the fullback up the belly, I wonder if Sutton would’ve been able to make this stop short of the chains.

Sometimes play callers get too cute and I think Sunday we saw the Bills fall victim of that. Sutton did a great job of sniffing out that fourth and one play call early in the fourth quarter of Sunday’s game, and it would up being a huge turning point in the contest as the Steelers’ offense took over on downs and ultimately drove the field for a go-ahead score.

After the game, like Sutton, Steelers head coach Mike Tomlin was asked about the big fourth down stop, and he told the media that they expected the Bills offense might try something like that due to what they showed during the preseason.

“It was just something that we anticipated,” Tomlin said. “They had gotten in that structure a bunch, four or five times in the preseason, just giving the dive to the fullback. So, we figured that that would be the next phase of it to fake that dive to the fullback and flip that ball out there to them. We talked about it, but you can’t take anything away from [Cam] Sutton, the guy I think that made the play. Just a really aware play and a big-time football play.”

A big-time football play indeed and one that was likely made because of great tape study this past week by both Sutton and Tomlin.