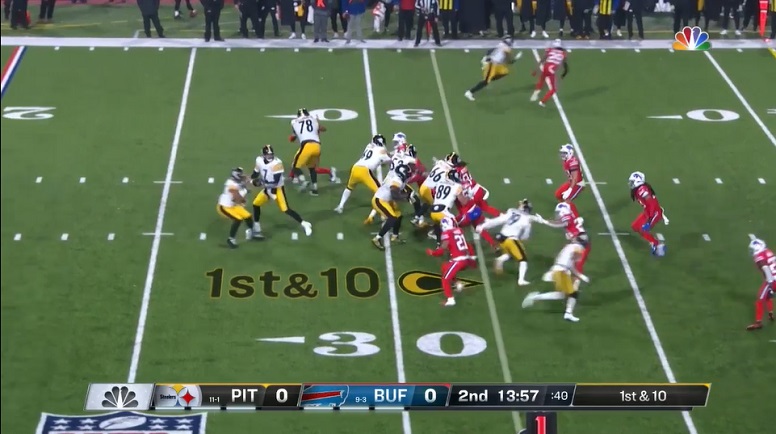 As we’ve done in the past, the keys to the Pittsburgh Steelers winning (or losing) today’s game. Three things that need to happen for them to end up on the right side of the score and vice versa in 2021 opener against the Buffalo Bills.

The Bills have done as good a job as anyone in slowing down Pittsburgh’s outside linebackers the last two years. They’ve done a great job of chipping, sliding protection, and keeping the alignment of TJ Watt and Bud Dupree wide so those guys rarely had 1v1 matchups.

Even with Dupree gone, the Steelers’ OLB group remains a strength of this team. Watt will have to show there’s no summer rust from missing so much time, Alex Highsmith can’t be slowed down by his groin injury, and Melvin Ingram will have to keep playing the way he did before. But Buffalo has made life tough on these guys. Maybe Pittsburgh will have to get more creative with alignments and stunts so these guys can have a consistent impact.

Which in all fairness, is a lot easier said than done. Diggs absolutely torched the Steelers in the second half of last season’s loss and went on to have one of the best statistical seasons by a wide receiver. Ever. Coming up with a gameplan to limit him is a big challenge. Though it goes against the norm, perhaps the team travels Joe Haden on Diggs and offers plenty of safety help.

To me, containing Diggs means keeping him out of the end zone and not allowing a catch that goes for 30+ yards or more on a scoring drive.

3. They Win On Third Downs

Winning possession downs is always key to winning a game. But I’ve heard Mike Tomlin reference it more than maybe ever before. And with good reason. Pittsburgh’s converted just 26% of their third downs in their combined 2019 and 2020 losses to Buffalo.

Meanwhile, the Bills had the league’s #1 third down offense last season, converting almost half the time. It was the league’s best mark in almost a decade. Both sides of the ball, the Steelers have to win on third down, or at least break even, to keep the time of possession scales tipped in their favor.

1. Empty Continues To Give Them Problems

Buffalo came out firing in their preseason tune-up game against the Green Bay Packers, throwing on their first 16 plays and not running the ball until the second quarter. About half of those snaps came out of empty, the Bills spreading the field with quick, horizontal passes.

Empty is tough for any defense to stop but Pittsburgh’s struggled against it more than most. Expect Brian Daboll, Josh Allen, and the Bills’ offense to test the Steelers early in this one. See what answers they have. Hopefully they’re better than season’s past.

Can’t forget about the value of special teams. Dallas’ Thursday night loss to Tampa Bay was proof positive of that. Like Dallas, the Steelers have a new snapper/holder combination. There’s a lot of “new” here and while the Steelers’ special teams have looked good this summer, the regular season is a different level. No turnovers, no penalties, no major mistakes. That’s a Week One win in my book.

X-Factor of the game. X-Factor of the season. The Steelers have lost the trench battle in their last two meetings. But it’s a clean slate with brand new personnel and staff. Adrian Klemm will need a better protection scheme and across the board, more answers than Shaun Sarrett head against this aggressive, attacking Bills’ defense. Watch out for those ILB/NCB blitzes.