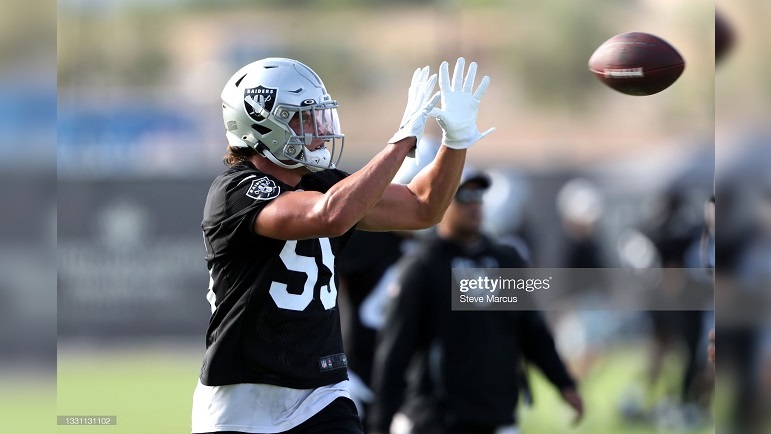 Is the Pittsburgh Steelers’ 53-man roster now set in stone for the team’s Week 1 road game against the Buffalo Bills? It’s certainly hard to say for sure right now on this Monday, especially with other teams still waiving young players that could make for interesting adds. In fact, the Las Vegas Raiders will reportedly be waiving one such player on Monday in linebacker Tanner Muse, a third-round draft pick of theirs from just a year ago.

Muse was a third-round pick out of Clemson in 2020. Missed his entire rookie season because of a toe injury, but took starter reps throughout camp and was a core special teamer.

Muse, who missed his 2020 rookie season with a toe injury, reportedly took some starter reps throughout this year’s training camp, and was a core special teamer. He is an extremely athletic player and one who tested off the charts during the 2020 pre-draft process. He also looked more than serviceable as a linebacker and special teams player in the 154 total preseason snaps he played this year.

The Steelers, in case you forgot, had some sort of elevated interest in Muse leading up to the 2020 NFL Draft. That elevated interest reportedly included the head coach Mike Tomlin and general manager Kevin Colbert dining with the Clemson product ahead of his Pro Day.

During his career at Clemson, Muse was credited with 192 tackles, four sacks, one forced fumble, seven interceptions and 14 defensed passes in 50 games played in. He actually turns 25 today, the day he is getting waived by the Raiders.

One would think that some team ahead of the Steelers on the waiver wire order would have enough interest in Muse to claim him, assuming he is indeed fully healthy and not waived as injured. Should, however, no other team be interested in claiming a healthy Muse, the Steelers should perhaps take a chance on the young linebacker.

At the very least, Muse would help the Steelers tremendously on special teams in addition to being a linebacker on the depth chart with some tiny bit of upside. The Steelers entered this week with linebackers Robert Spillane, Marcus Allen and Ulysees Gilbert III all on the depth chart behind starters Devin Bush and newcomer Joe Schobert. The fact that Gilbert made this year’s initial 53-man roster was a bit of a surprise, and Allen was dealing with a minor injury after the preseason finale, as well.