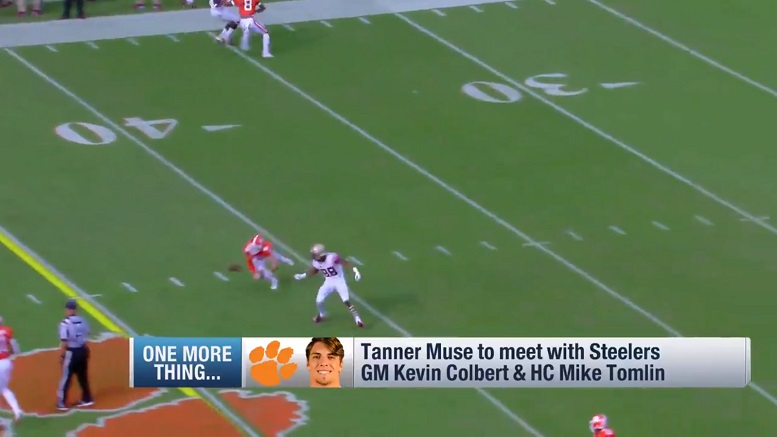 The Clemson pro day took place on Thursday and as previously reported, Pittsburgh Steelers general manager Kevin Colbert and head coach Mike Tomlin were both on hand for it. One of the prospects that the Steelers watched go through the paces on Thursday, safety/linebacker Tanner Muse, reportedly had dinner Wednesday night with Colbert and Tomlin, according to Tom Pelissero of the NFL Network.

Muse had a fantastic scouting combine after measuring in at 6020, 227-pounds. He ran his 40-yard dash in Indianapolis, IN in 4.41-seconds, did 20 reps on the bench and posted a vertical jump of 34.5-inches and a broad jump of 10’4″. At his Thursday pro day, Muse posted a short-shuttle time of 4.12-seconds and a three-cone time of 6.84-seconds, both of which are fantastic.

Muse projects to be a linebacker at the NFL level even though he was officially listed as a safety at the combine. He did linebacker drills at the combine and did more of them on Thursday at his pro day. He did play a little linebacker for Clemson this past season.

During his career at Clemson, Muse was credited with 192 tackles, four sacks, one forced fumble, seven interceptions and 14 defensed passes in 50 games played in. He reportedly will turn 24 in September.

Muse’s draft stock seems to be all over the place after the combine and that’s likely due to the fact that he might be headed for a position switch at the NFL level. His ultra-high pSPARQ score and tape should result in him being drafted by the start of the fifth-round.

Combine standout Tanner Muse will do linebacker drills (not DB drills) at Clemson's pro day … and has a busy schedule today, too. @nflnetwork pic.twitter.com/uJJjQJ7QBw

Tanner Muse on the potential move to linebacker: pic.twitter.com/lNGtNgEIaL

Tanner Muse hustles and runs down J.K. Dobbins to prevent a touchdown and then the Tigers D holds OSU to a field goal.