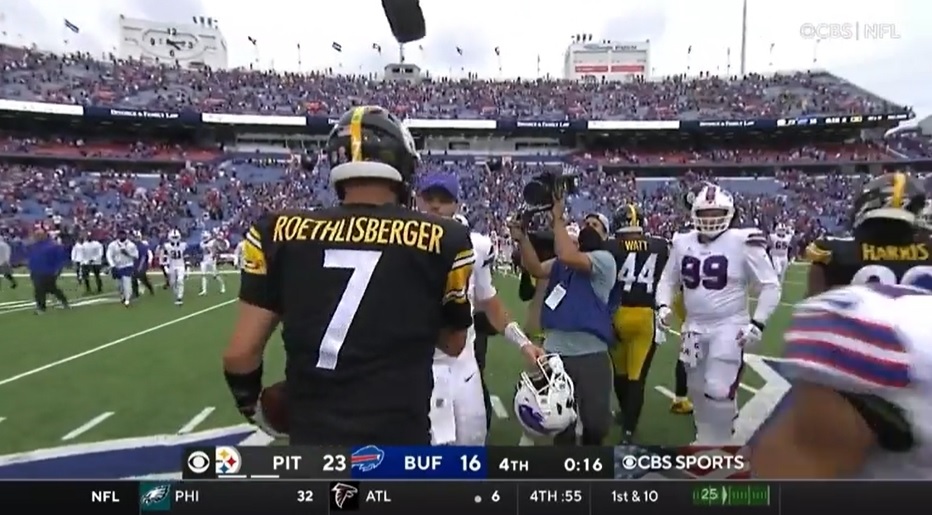 What a difference a week makes. Seven days ago, many in the national media had written off the Pittsburgh Steelers. An old quarterback, a new offensive line, a tough division full of fresh faces like Lamar Jackson, Baker Mayfield, even Joe Burrow. Fresh off a win against the Buffalo Bills, the media tune has changed. In NFL.com’s post Week 1 power rankings, the Steelers have cracked the top five as one of football’s top teams.

“All your summer Steelers takes are junk. Mike Tomlin’s team went up to Western New York and delivered a team performance that blasted away six months of narratives about the state of Pittsburgh professional football. Minkah Fitzpatrick and T.J. Watt spearheaded a stingy defense that eliminated the big-strike Bills attack that flummoxed the NFL a season ago, and Ben Roethlisberger and the offense found their footing in the second half with scores on four consecutive possessions. It was both a victory and a reminder: This Steelers team ain’t dead yet. Said Big Ben: “Guys understand what just happened.”

It wasn’t just the fact Pittsburgh won the game. It’s who they beat. A strong Bills’ team, one game away from the Super Bowl a year ago, and a group that’s pummeled Pittsburgh each of the last two years. It looked like that story would remain unchanged after the first 30 minutes Sunday, Buffalo held a commanding 10-0 lead as the Steelers’ offense looked lifeless drive after drive while their special teams struggled.

Everything changed in the second half. The offense found the end zone thanks to Diontae Johnson’s juggling TD catch followed up by Miles Killebrew’s blocked punt that led to Ulysees Gilbert III’s touchdown. The score went from 10-6 Buffalo to 20-10 Pittsburgh and the defense, the one side who didn’t change, kept up their consistent pressure to close things out.

The Steelers moved up five spots in Hanzus’ rankings to #5 in the league trailing only Tamp Bay (at #1), Kansas City, the Los Angeles Rams, and Seattle Seahawks. That makes Pittsburgh the top-ranked team in the AFC North, ahead of Baltimore (#5 to #7), and Cleveland (remained at #8).

Pittsburgh and Cincinnati were the only two AFC North teams to win their opener. The Bengals climbed seven spots to #23, the second-highest jump of any team in these rankings only behind the Philadelphia Eagles, who moved up eight notches.

Of course, these are power rankings. Which is to say, they’re meaningless. If the Steelers lay and egg to the Raiders in Week 2, which has been known to happen, no one is celebrating the joy of beating the Bills. It’s a marathon, not a sprint, as 2020 showed Pittsburgh, collapsing after an 11-0 start. But it’s a sign the national media’s warming up to the Steelers’ chances. Rightfully so.