In two words, surprisngly good. This Bengals team has faced two talented running backs the first two weeks, Dalvin Cook and David Montgomery, and held them in check. Helps they weren’t facing two equally as talented offensive lines but still. Cook and Montomery posted identical 20 carry, 61 yard performances against the Bengals this week. If you’re into advanced metrics, the Bengals’ EXP (expected points contributed) against the run is 13.13, second best in the league only behind the Bucs. By running backs, they’ve allowed only three runs of 10+ yards and none longer than 17.

It’s certainly been an effort in doing that. The Bengals remain a 4-3 team but it feels like they’ve added some wrinkles to their front. At least against the top running backs they’ve been playing against. They’ve done a couple different things to stop the run. A 5-2 look with the nose tackle head-up on the center as opposed to their normal 4-3 front with him shaded, usually to the strength of the formation, as a 1T. A true 0T. Don’t see those too often, even in Pittsburgh (almost always shaded).

Check out this 6-2 front too. Roll a LB down to the line of scrimmage and walk the SS, Vonn Bell down into the box like a linebacker. Zero running room here, though I suppose if you can get through the first level, there’s a lot of daylight. 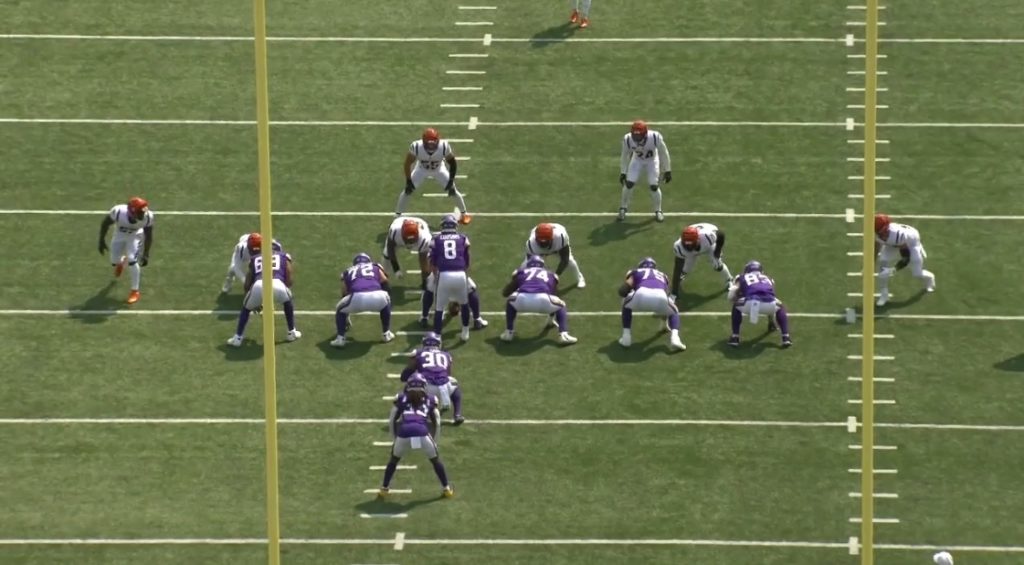 Will the Bengals commit to the Steelers’ run game just as hard? It’s difficult to say. A lot of this, to be fair, came against 2 back sets with a FB (so you might not see much Derek Watt this weekend). Taking away the run game has worked well for the Bills and Raiders but then again, the Steelers’ run game isn’t as feared. We’ll see what the approach is but the sledding might not get any easier for Pittsburgh.

Their off-ball LB group has gotten better with some draft picks coming into their own. Logan Wilson is a nearly every down linebacker and their leading tackle with 16. For once, one of the Bengals’ safeties don’t lead the team. Wilson also has the team’s lone INT through two games. The Bengals’ defense has missed just eight tackles in two games, tied for 5th best in the NFL.

Through two games, they’re allowing 22 points per game, which is top ten in football.

A pass rush that’s getting after QBs. Six sacks in the first two games. Three in Week One, three in Week Two, so they didn’t all come in just one outing. All six come from the d-line with DT BJ Hill the team leader with two. They added Trey Hendrickson to replace Carl Lawson off the edge and he’s off to a nice start. Their pressure is coming from a lot of sources from Hill to Hendrickson to Hubbard.

The one thing that really jumped out at me in watching the Bengals the first two weeks are their eye discipline. Haven’t been fooled easily. Especially on playaction. So many PA shots against them have resulted in checkdowns or contested throws. I don’t have a number to it but I best they’re among the best in the league against it. So a lot the Steelers (and fans) may want to do this weekend, use a fullback, get under center, playfake, may be bad ideas.

Coverages can vary but they play a lot of Cover 2, especially vs 3×1.

They tend to play more C1 against empty sets. They’re not afraid to show aggressive looks too, playing Cover 0 here on 3rd and 6 against the Vikings, the LB dropping out of the A gap to try to rob a hot route.

The first divisional foe comes to Pittsburgh this week and they are not the same team as last year.  The defense has new players on all three levels.  The defensive line can get push up the middle; the linebackers are a rotation of a lot of young players and the defensive backs has a familiar face. The Bengals have played two close games so far this season with both being decided by a field goal and the defense has a lot to do with that.

Last week the Steelers tackles where under the microscope but this week I think it’ll be the interior offensive line due to the push of the defensive tackles. D.J. Reader (98) missed most of 2020 with a quad injury but is back to man the middle of the defense. He is 0/1 tech playing between the A gaps and had very good play strength to clog gaps, handle double team blocks and push the pocket. Larry Ogunjobi (65) plays the 3/4i tech and has great motor, active, heavy hands and uses a club/swim or bull rush to provide pressure.

Behind them is Josh Tupou (68) a second year player who has looked very disruptive so far. He has good strength and lateral agility to stack and shed and gives good chase in all situations. B.J. Hill (92) and can play the inside or at defensive end and plays with good quickness and agility to split gaps and leads the team with two sacks so far.

Here is Ogunjobi (65) lined up right over the center.  He shows his play strength to bull rush the center and pushing him into the quarterbacks lap and try to reach around the center to get the sack.

On the edge is one of the few hold overs from last year Sam Hubbard (94). He plays on the left side is good at diagnosing plays and can set the edge to shed and make tackles.  He will try a variety of rushes and be used as a looper to the inside. On the right side they added free agent Trey Hendrickson (91). He is a high motor player that uses good leverage and leg drive on power rushes and like so to use a chop/rip around the edge.

Cam Sample (96) is a rookie that they use in a variety of ways.  He uses quickness, heavy hands and play strength when varying his pass rush and has good mental processing to diagnose screens. He will also kick inside on passing downs or drop into coverage. Wyatt Ray (93) has adequate play strength, will also drop into coverage and will pass rush from a 2 or 3 point stance.

The linebacker group through two games has used all their players in a rotation. Logan Wilson (55) is the MIKE, leads the team in tackles and is on the field the majority of the time. He is a strong tackler, solid in Man coverage on running backs and will blitz as well. Germaine Pratt (57) is the other starter and has good athleticism and fills gaps well. He will also align outside and can set on the edge or rush the passer.

In this play, Pratt (57) will adjust quickly to the rollout, recognize the underneath receiver and show good acceleration to put nice hit on him for the quick stop.

Akeem Davis-Gaither (59) plays in nickel and passing situations and is very athletic, diagnoses well and will chase sideline to sideline.  He will line up over the slot and diagnoses screens well. Jordan Evans (50) plays well in space, is solid in Zone coverage and will blitz inside but plays with high pad level. Marcus Bailey (51) is a good play processor and communicator with solid athleticism and good physicality to fill gaps or tackle with some pop.

Chidobe Awuzie (22) has good size, is a good tackler and is quick twitched playing equally strong in Man or coverage. In week one he was tasked with covering Minnesota’s Justin Jefferson and traveled where every he went. Trae Waynes (26) returned to practice this week after dealing with a hamstring injury from training camp. He has good size and speed but hasn’t played in a game since 2019. Eli Apple (20) has been playing in his place and has solid ball skills, is an adequate tackler and his first interception came off of Ben Roethlisberger in 2016. Mike Hilton (21) plays in the slot and he is still doing Mike Hilton things.  Blitzing from the slot and attacking the backfield versus the run with two tackles for a loss already.

Here is one for old time sake. Hilton (21) will come knifing in from the right side to make the stop in the backfield. Also, a nice play by Tupou (68) to stack and shed the center to fill the gap inside.

The backups include Darius Phillips (23) who can play outside or in the slot and has solid size, loose hips and plays the ball well. Jalen Davis (35) plays more on special teams but fits as a slot player with good quickness and agility.

Vonn Bell (24) is a physical safety who is comfortable playing in the box or the deep half.  He is a physical tackler, helpful in the run game and will also be tasked with covering tight ends.  I think Pat Freiermuth can win that match up.  Jesse Bates III (30) will be very active flashing to make plays all over the field.  He has very good ball skills and range making him valuable as the single high safety but can take angles to the ball that allow cut backs.

Ricardo Allen (37) is the primary safety backup and will play in dime either as a deep safety or as a linebacker.  He flows to the ball well, is a willing tackler and will also be used to blitz. Brandon Wilson (40) is the other safety on the roster and is a very good kick returner. He has yet to play on defense this year but has seen action in the slot in dime packages in previous years.