Welcome back to another season of Pittsburgh Steelers’ sack breakdowns. We’ll be examining and assessing blame for each sack allowed by the team this season, with a running tracker of sacks and penalties.

Moving on with the two given up by the Pittsburgh Steelers in Week two versus the Las Vegas Raiders.

Ben Roethlisberger wants to hit JuJu Smith-Schuster deep down the middle of the field and he waits and waits and waits for it to try to come open. But with the MOFC closed with a deep post free safety and the linebacker ROBOT-ing Smith-Schuster’s route underneath, it never really opens up. Roethlisberger has underneath options, Najee Harris and Pat Freiermuth, but got locked on wanting to take that deep shot, and missed other options. 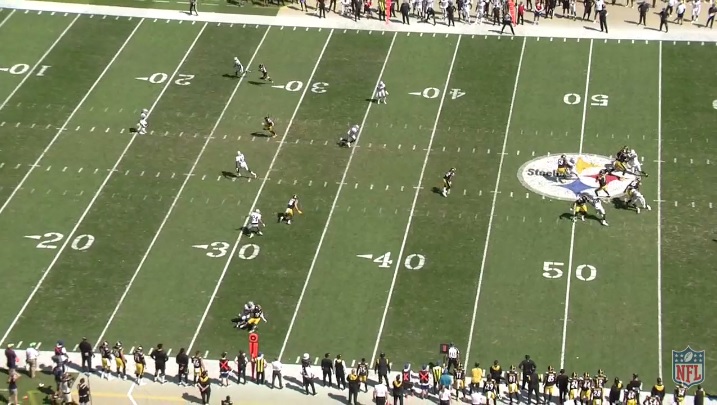 Roethlisberger attempts to climb the pocket and by time but he runs out of it. Kevin Dotson quits moving laterally and loses the RDT, who dip under, corners, and trips Roethlisberger up from behind. Initially, I didn’t think this would be a sack as with Roethlisberger seeming to fall past the line of scrimmage. Ultimately, it went down as a sack of no yards lost.

Ultimately, I’ll put half on Roethlisberger for not pulling the trigger on any option. Even chucking it up for Smih-Schuster wouldn’t have been a bad idea. But he also could’ve hit underneath options, gotten positive yards, and let those guys make a play. But also half on Dotson for not continuing to slide on his block. Slowed up a bit, moved his hands without moving his feet, and lost his man.

Blame: Half on Roethlisberger, half on Dotson

Max protect here with the tight end and the back staying in. Only three in the route with seven in coverage. Still, Roethlisberger gets a 1v1 look to Chase Claypool to the bottom but doesn’t like the lack of separation Claypool’s gotten and tries to go through his progression.

Pressure comes up the middle as RG Trai Turner loses his block as the interior linemen twist over each other. Chukwuma Okorafor initially picks it up but there’s a gap in the middle for the DT to squeeze through and get to Roethlisberger. 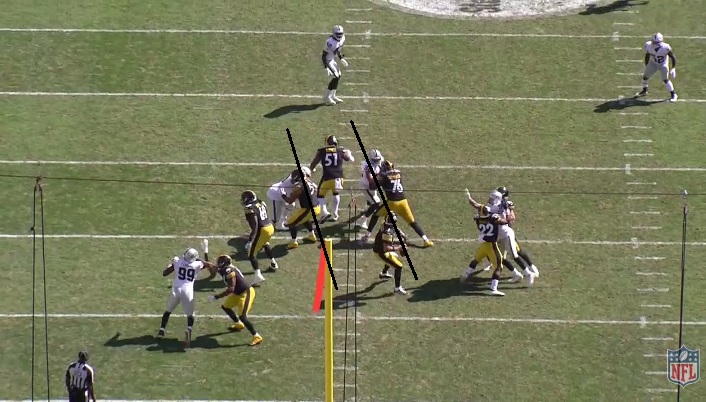 And down goes Roethlisberger.

Not a tremendous playcall in hindsight and you could argue a lot of different issues here. But Turner has to stay in his spot and not shift out of the protection, as he essentially did. With seven blocking and a four man rush, the QB should have more time than this.

*Based on comments Matt Canada made following last week’s sack breakdown, I’ve changed a “Good Defense” sack to Zach Gentry from Week One against the Bills.

*Trai Turner was penalized and ejected but his penalty offset and did not hurt the team so I do not count those are ones which are declined.