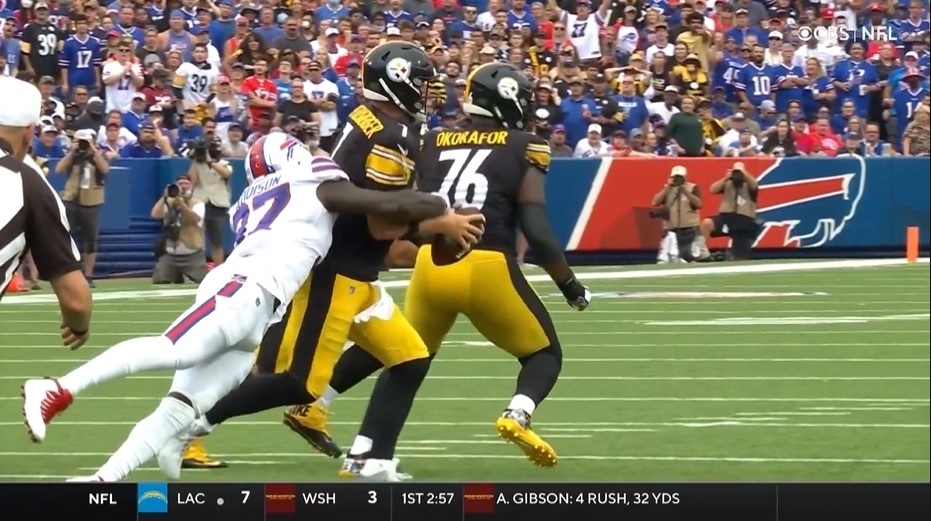 Welcome back to another season of Pittsburgh Steelers’ sack breakdowns. We’ll be examining and assessing blame for each sack allowed by the team this season, with a running tracker of sacks and penalties.

We’ll start things off with the two allowed in the Week 1 opener against the Buffalo Bills.

Not a good feeling to give up a sack against a three man rush with five blocking. Rookie left tackle Dan Moore Jr. has some trouble with veteran RDE Mario Addison, losing the edge here at the top of the arc.

Has trouble getting into Addison’s pads, getting knocked back initially and then losing at the top of the arc as Addison turns the corner upfield. Roethlisberger moves to his right and doesn’t feel Addison behind, who swipes down and knocks the football out. Luckily, Chukwuma Okorafor falls on to avoid making a bad play any worse.

I don’t want to be too harsh on Moore here. He does push Addison upfield past the pocket of the quarterback. And it’s also worth noting there was no one open, which isn’t a terrible surprise considering the Bills dropped eight into coverage. No one for Roethlisberger to throw to. 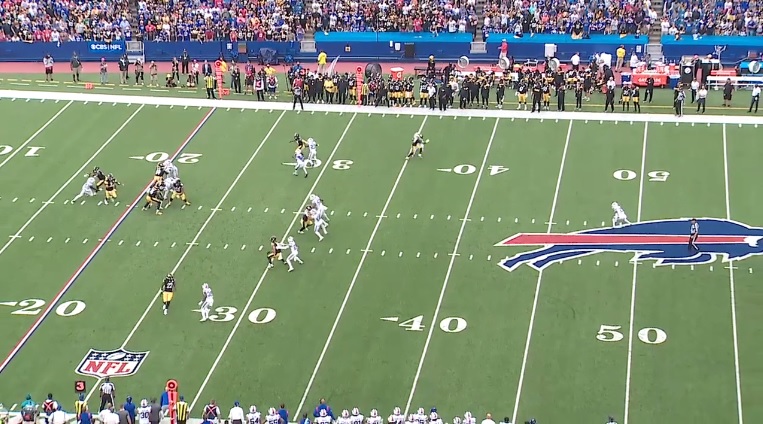 And Roethlisberger could’ve climbed the pocket better here, though I think Addison would’ve eventually gotten to him too. You could debate which one of these three groups should get the most blame – Moore, Roethlisberger, or the receivers. Ultimately, I can’t put it too much on the WRs because the snap to sack wasn’t terribly long and the Bills did drop eight into coverage. I’ll put half on Moore for struggling to finish at the top and half on Roethlisberger for less than ideal pocket movement, though I understand him running to what he felt like was an open spot.

Blame: Half on Moore, half on Roethlisberger

Bit of a ill-timed blitz by the Bills. Steelers running playaction with Roethlisberger under center, something new under OC Matt Canada. But there are downsides to it too. With his back turned, Roethlisberger can’t see the blitz by safety Jordan Poyer and by the time he does, has hardly any time to react.

Pittsburgh’s trying to run a Yankee concept with two crossers deep downfield but there’s no time to let the route develop. 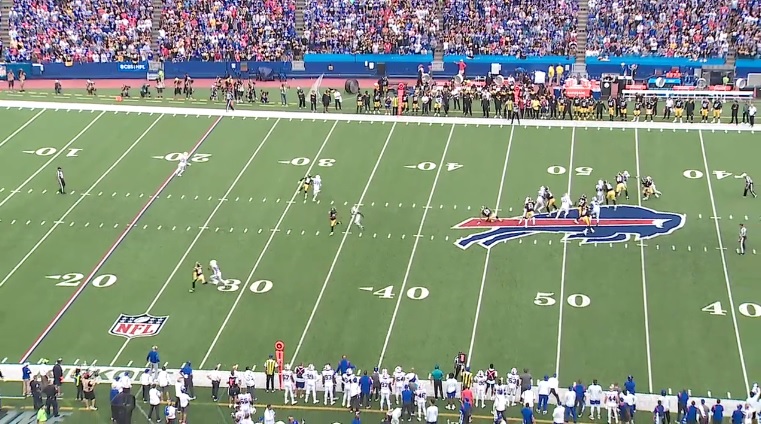 With the back part of the run-fake and the tight end in, there’s no checkdown option either. Roethlisberger tries to get the pass off and does fire it but he’s called in the grasp and it goes down as a sack.

Don’t think there’s really anything “wrong” here by the blocking scheme. Bills just sent Poyer. The run-fake probably helped him and everyone else get downhill. Just one of the cons of playaction and Buffalo capitalizes. Kudos to their defense here.