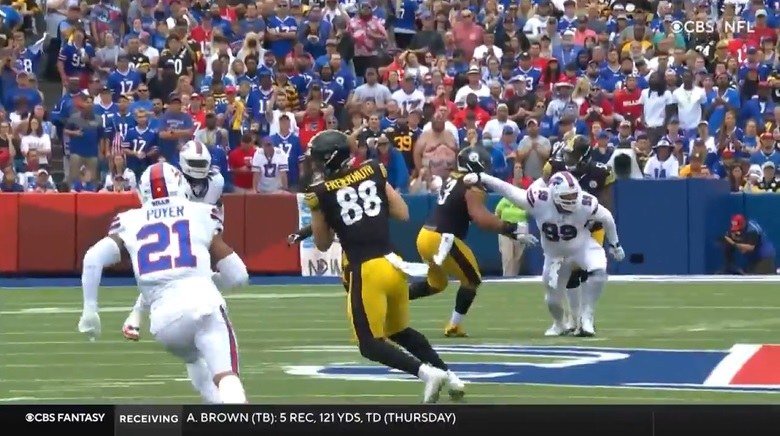 Harris was one of two rookies to play every offensive snap. There weren’t a lot of running lanes for him early but that improved a bit in the second half. He was consistently able to finish forward adding yards after contact. He showed good patience and balance working when finding gaps and his vision was on point especially on his big runs.

Harris received three targets in the game.  The first was on a Sneak route and the pass was behind him.  Ben Roethlisberger was talking to him right away after the play so he may have not set up correctly. Target number two was an overthrow by Roethlisberger in the right flat and the third target was a catch in the red zone on a quick In route. He lined up in the slot and outside as well and his routes overall included stop, swing, flat, sneak, slant and quick ins.

He didn’t have a lot of pass protection reps but he showed good awareness and effectiveness but was off balance a bit on at least one rep.

Here is a pass pro rep from Harris (22). He’s initially looking left but picks up Matt Milano on the blitz and pushes him past the QB and then sustains the block

Freiermuth was, in my opinion, the most impressive of the offensive rookies and that was with receiving just one target which he corralled in the middle of the field for a big gain.  He was most impressive as a blocker.  He showed aggressiveness and balance and was able to sustain whether he was leading through a hole or blocking on the edge. Dave Bryan posted a great clip of him driving a defender into the bench. He’s going to get his targets but if he can continue to block well he will see his snap count go up.

Back to back blocks here by Freiermuth (88). First, I like the way he plays under control to square up the linebacker before driving him straight back. The next play is a one on one block versus fellow rookie Greg Rousseau (50) and he is able to get inside and sustain long enough to let Harris by.

Overall, the two offensive linemen on this list held their own.  The Bills have a good defensive line and this was a good test. Green played all but three snaps and did his first job, the snap, well.  Shotgun snaps were put in a manageable position consistently something that had been an issue in previous seasons.

As a run blocker he displayed good quickness out of his stance as well as agility and speed.  He got out in front well of screens and the long run by Claypool. He did a nice job also climbing to the second level and sustaining versus linebackers.  I would like to see some improvement on down/drive blocks as the season goes on as well as core strength to not get twisted by defensive lineman.

In pass protection, his anchor looked better than it was in the preseason and was solid versus power rushers.  When uncovered he showed aggressiveness, awareness and was decisive where he was going to lend help.  Working on his hand strength to lock on to defenders and lateral agility to mirror pass rushers will help him improve.

Moore was the other rookie to play every offensive snap and as expected from all of these rookies, there was some good as well as not so good. As a run blocker he was solid in base and hinge blocks to block off the defenders route to the ball. He did a nice job climbing to the second level and showed good mobility in space.  He needs to be a little quicker laterally on Zone runs and lower his hips a tad.

In pass protection, he had some very good reps up the edge looking comfortable getting to his set point. He was giving up too much depth on power rushers and would like to see him punch a little quicker and counter with his hands more.  Buffalo has some good edge rushers so this was a tough first assignment and there is a lot to build on here as the season goes on.

A couple of good looks from Moore (65). First working one on one on the edge with a pass rusher and then climbing to the second level to control the linebacker.

Johnson got a helmet for this game after pregame injury to Robert Spillane and saw time on three special team units. On punt cover, he did a nice job blocking his rusher and show solid speed downfield.  On punt return he was okay keeping his man away from the returner. This is a difficult assignment and will improve as the goes. He was also on kick cover and did not record a tackle on any of the four kick returns.

The defensive surprise performer was Norwood who started and played a ton both as a slot corner and free safety when the moved Minkah Fitzpatrick into the slot. It didn’t take long for him to get involved either getting in on the tackle on the first two plays.  He did a nice job as well as a tackler including getting low against a tight end to wrap up a leg for the tackle. He did get juked once by Stefon Diggs but that has happened to a lot of players.

Norwood played both Zone and Man in coverage and while he looked a little uncomfortable in train man coverage early he stuck with receivers better late in the game. He was used to blitz a handful of time but didn’t get any pressure and actually pulled up rather than engaging blocker when there wasn’t a free rush lane. This could have been his decision or a coaching point to follow the QB if there wasn’t a free lane. He was a willing participant in the run game as well. If he can continue to earn this role with the defense it could be a fantastic find for the Steelers.

Here is Norwood (21) getting in on the tackling early in the game. Here are the first and second offensive plays for Buffalo.

Overall Harvin had an okay day.  It could have been first game jitters or it could have been because the wind was whipping in Orchard Park. The average was not great but he did drop two inside the twenty. The first kick of 41 led to a fair catch at the 12 and the second kick of 51 yards got them out of bad field position.  The next two were 39 and 30 yards before finishing with a 46 yarder late in the second half.  He did not have to punt in the second half. He also handled the hold well on 3 field goals and two extra points.