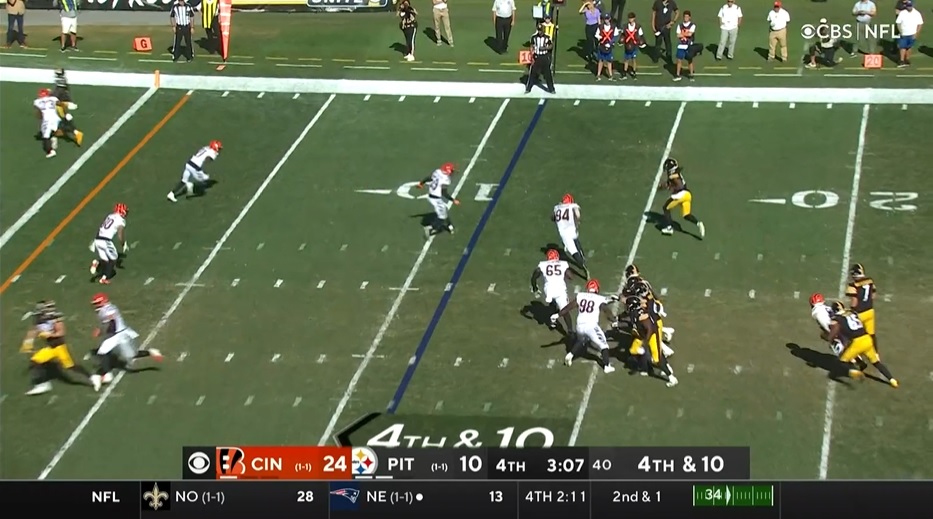 Of everything ugly that happened during Sunday’s loss to the Cincinnati Bengals, and there was plenty of it, there might not have been a more head-scratching call than the 4th and 10 swing pass to Najee Harris. Harris was immediately swarmed by multiple Bengals’ defenders, a one yard loss to stall out a 12 play, 73 yard drive with the Steelers down two-scores.

Take a look at the play. If you want to even call it that.

The Bengals took over on downs and bled more clock, essentially salting the game away after that stop. Speaking with reporters following a miserable day, Ben Roethlisberger explained the team’s thought process on the play.

“They have a type of defense,” he said via the Steelers’ YouTube channel. “We call it a picket fence. Where they sit back. We anticipated that. That’s what they showed. So we were going to get it to him to get guys out in front to block for him.”

Watching the play, it doesn’t look like there’s any designed blocking for Harris. The receivers to the top both run routes. In a sense, it clears out space for Harris in the flat. But the Bengals were all over him and even a runner who breaks tackles as regularly as Harris had no chance on the play, who needed to run 14 yards from where he caught the ball to move the sticks.

Mike Tomlin had a similar assessment of the call in his post-game remarks.

“We had fired all of our bullets at our juncture,” he said. “In terms of our play selection, it just wasn’t a good enough play to get in there They had a picket fence…they’re going to allow you to throw and catch the ball in front of them. But you got to do some things after that.”

Roethlisberger said it was the best call in a bad situation, though mid-thought, suggested there may have been a better course of action.

“You’re a little limited from that far out of what you can do. Except maybe throw a ball up. In hindsight, maybe we should’ve taken a shot to the end zone. I wish I would’ve done that.”

In another lackluster performance by the offense, there’s plenty “I wishes” in this game. The next will be an “I wish for a win” against the Green Bay Packers, an offense certainly capable of putting points on the board. Either Pittsburgh’s defense will have to get healthy and play as they did versus the Buffalo Bills. Or this offense will have to turn things around in a hurry.