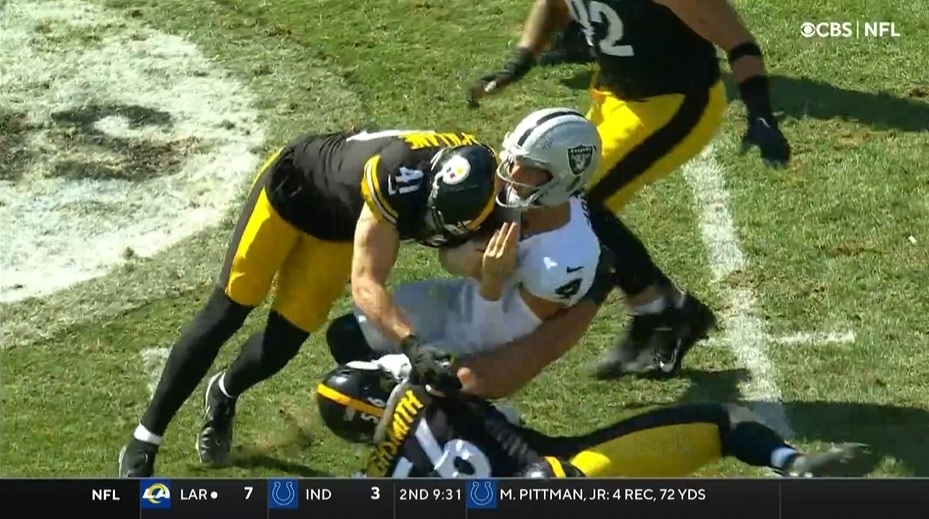 The NFL is rightfully doing its best to protect the players (and protect themselves from future lawsuits). But it’s forced players to make decisions and evaluations in a seemingly impossible amount of time. That’s what happened when Robert Spillane was flagged for an illegal hit on Las Vegas Raiders’ QB Derek Carr today. Carr slid late and Spillane hit him high, drawing a penalty.

After the game, Spillane talked with reporters about that play.

“That’s a very tough spot,” he said via the team’s YouTube channel. “I don’t want to hit him but at the same time, he’s still running the ball. He’s running, making jukes, trying to get extra yardage. I try to get my head off to the side. There’s no intention to try to hit a sliding quarterback. I wish he would’ve slide three yards earlier, I pull up in the play is nothing.”

Here’s a look at the play. Carr gained five on the run but the penalty tacked on another 15 yards.

That penalty helped lead to a Raiders’ field goal, putting them up 6-0 in the second quarter. Pittsburgh was penalized five times for 43 yards in the game.

Spillane said players do their best to play the game safe and legal. But said there’s only so much they can do.

“We as players take a lot on our own shoulders as player safety because it’s the initiative around the league. So I believe in player safety. Never go out there to hurt somebody. So it’s just part of the game.”

There’s a similar dilemma in the college game. Targeting calls there lead to ejections, which have been proven costly time and time again and led to almost weekly controversy.

Spillane got the start in place of the injured Devin Bush, who like so many of his teammates, suffered a groin injury during the week. Spillane led the team with 12 tackles (eight solo). Assuming Bush can play next Sunday against the Bengals, Spillane will head back to the bench and assume his role on special teams, though he double-dipped on both today.